Tim Footman and Patroclus, here you are:

1. Coming in at a solid numero uno is Ernest Hemmingway. Self impressed, mediocre, uneven...take away the Papa Hemmingway myth and that's what you have left. The guy was a drunk and he wrote like a drunk. Period.

2. JG Ballard. Just for writing 'Crash', a classic of the 'Oh My God I am So Incredibly Goddamned Cool' school of writing. It manages to be both icky and mind-numbingly dull for the simple fact that the entire point of the book is to showcase the author being all blase and intellectual while writing about sexual perversion. That's time I'll never get back.

3. Clive Cussler. The man responsible for taking action/adventure fiction to a level so ass-clenchingly bad it actually causes pain. Protagonist Dirk Pitt is to Clive Cussler as Ferrari is to balding man with erectile dysfunction. One weeps.*

4. St. Augustine of Hippo. I have tried, I have failed, I have tried again, rinse repeat, yes, if you want to understand the early church you need to read Augustine, but dammit, the man NEEDS TO FUCKING GET OVER HIMSELF. Reading the Confessio is like sitting next to a retarded kid obsessively picking a scab. GAAAAAAH.

5. Dante Rossetti.What a nasty little puke he was. More known for his artwork than for his writing. Seeing as how his artwork is all about him, I assume his writing sucked just as bad, dripping with false sentiment, passive aggression and self-aggrandization.

6. John Norman. His 'Gor' series constitutes a crime against both writing and humanity. On a more personal level this series was probably responsible for more than a few real crimes against women, simply by feeding the seething resentments and secret hate fantasies of abusive personalities. I have never known an abusive man who did not absolutely LOVE the 'Gor' books. (That latter is probably a generational thing. I can't see anyone nowadays picking up one of those pathetic 'Gor' abortions and thinking 'hey, this is REALLY cool'.)

7. Antonio Vasari. 'Lives of the Famous Artists' will actually make you stupider.
Plus I hate him.
It's personal.
He knows why.
Oh, yeah, he knows.

9. Margaret Cho, for writing 'I'm the One That I Want', a book so completely marinated in hate that I felt like I needed to wash my hands after I read it.

So why aren't, say, Truman Capote or Hunter S. Thompson here? Because they never made any bones about the fact that it was all about them all the time. Although in certain moods Hunter S. makes the list because he reminds me of this one guy I hate named George.

Now I have all these pinecones piled up next to me here, but you just ignore them. Look! Bread! Bread heels! Mmmm! And stale dinner rolls! Look, I'm breaking them up! Heeeeeere, duckies...
Heeeeere duckies...

( I tag NOSHIT SHERLOCK who can just damn well come out of hiding and do the fricken meme even if she just does it in my comments lounge....CHAUCERS BITCH, MANGONEL and whoever else feels like it.)

* well of course I've read all of them.
Posted by FirstNations at 9:01 PM 19 comments: Links to this post

Ok fine, THIS is why I haven't been blogging lately.
1. I'ts been HOT OUT. During the mornings I rush to get my usual household chores done, then spead the early afternoons painting the shade side of the house. Then I spend the rest of the day supine, shotgunning lager and sitting in front of an electric fan, periodically firing a blast of ice water (scented with patchouli) at myself with a small trigger sprayer.

My girldog, Jett, is a small black terrier. Instead of the usual hard terrier coat, though, she ended up with the double coat of a Labrador retriever and the undercoat density of a Siberian Husky. This is not an exaggeration. The animals' fur is packed closer than velour. In this kind of heat it's only humane to shear her down, and this I set out to do.
The clippers burnt out.
I go through a set of clippers every year on her in just this fashion. I swear to God I keep this animal brushed, folks!
Finally I resorted to sewing shears, and struggled through that animals pelt for nearly an hour. For once she did not spaz and tweak, and I think some dim idea of the favor that was being done her might have shot through. Which is probably wishful thinking on my part; she was more than likely dazed by the heat. In any case, I now have an even smaller, grey dog which looks like a whippet with a Labbie head sitting on top.
And because I had to use a scissors, she's bumblebee-striped. Like shearling, but ridgey.
My dog is corrugated.
_________________________________

The heat has brought my garden forth like an Imax special effect. There are spaces so closely packed that the ground cannot be seen....hemerocallis of various types, Love In A Mist, Pot Marigold, phlox, all kinds of papaveracea, knautia, penstemon...it's wild! Things that normally finish by June are still blossoming. I finally stopped my Easter Lilly; I was afraid it'd bloom itself out and exhaust the bulb.
I attribute this to nothing on my part except maybe planting too closely. The late rains combined with the sudden sunshine, heat and humidity are what did the trick.
__________________________________

Around here you get used to odd combinations of sound...all the usual countryfied songs like cows bellering, roosters, bees and birds, alongside police sirens, helicopters, military aircraft booming overhead, and automatic gunfire (we live close enough to Abbotsford, Canada to be able to hear the drug dealers picking one another off when the wind is coming from the right direction.) The rest of the sound track is thanks to an overeager local and state police force, Lynden Airport, Homeland Security, and The Border Patrol.
Lately the last two have been running NUTS. I don't think I'm ever going to get used to armed personnel flying overhead so low you can smell what they had for breakfast. If all you had to go by were the number of government, military and law enforcement helicopters in the air, a person would think that Sumas is Los Angeles North.
Now. Does all this increase in official activity mean there's been an increase in illegal activity around here? I don't think so, no. I think what's happened is that the weather's been nice and all the uniforms are out profiling in their shiny toys like a bunch of teenagers.
Not three miles from where I sit begin miles upon miles upon miles of unpatrolled, uninhabited border marching up across the wooded hills, headed east. You see nary a black and gold helicopter up there, though, heck no. They're all doing circles over my back yard watching the fat broad flip them off.
Everyone knows that the illegal activity happens UP THERE. You want to take a bite out of crime? Stop burning avgas needlessly. The criminals you want are too bright to come through the damn border crossing AT SUMAS. Homeland Security in particular has no excuse because they have broader powers of stop and search. Go sit your black and gold asses down on Mt. Baker Highway, switch on the A/C and start randomly stopping vehicles.
Posted by FirstNations at 10:22 AM 14 comments: Links to this post

the rest of him was too
a headless naked chicken
without no feeties, ew.

The crew jumped out the hatchway
and shouted 'Hip Hooray!
They all took off on bicycles 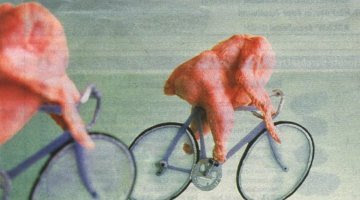 and went to Monterey.**

The captain sat his chicken butt
right down upon my lawn
the grass all died and I got mad
but all he did was yawn.
I ran and got the garden hose
I turned it on him, hard
He ran into the garage
and hid, 'cause he was scar'd.

In haste he'd dropped his spaceship keys
I grabbed them (you know me)
I jumped into the drivers seat
And backed into a tree.
I think I might have squashed a kid
I think I greased his cat
It may have hit the windsheild
It sounded pretty flat.
But once I figured out the dash
My Native ass was flying
I flew out past the nudist camp
and did some nekkid spying.
I chased some cows, I chased some nuns
I buzzed the local Wal-Mart
I chased a bunch of fat guys 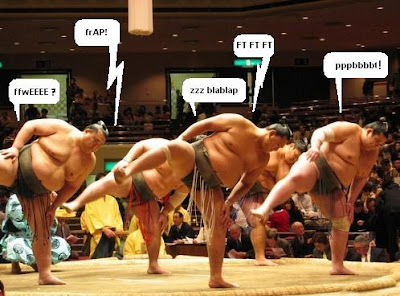 ...the running made them all fart.

As I was doing loop de loops
Over City Hall
The Minuteman Militia
responded (at a crawl)
Beau loaded up his shotgun
with rocksalt, nails and phlegm
Cyrus grabbed a shortcase
and tossed a beer to Clem
Abner lobbed some dirtclods
I dodged them all with ease
I lit a joint and flipped them off
The rednecks were not pleased.

So now I have a spaceship
It makes commuting fun
Traffic aint an issue
with your phasers to 'stun'.
My Biker customised it
With kickass thumpin tunes
a Hemi with a blower
ghost flames and baby moons.
As for the spaceman-chicken
He lives in my garage
He really keeps the mice down, 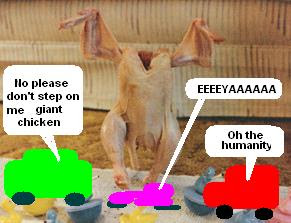 But he's getting kinda large.

**...but they got lost, because they forgot to bring a map. 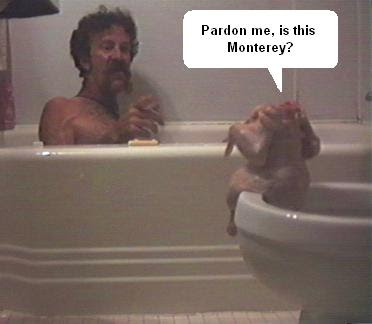 Posted by FirstNations at 9:32 AM 22 comments: Links to this post