updated!!!: ARE YOU BITING YOUR TOENAILS IN SUSPENSE YET?

The Playboy of the Western World is doing poorly. I've been busy chasing down doctors and trying to find out what's going on with the man. Meanwhile he's been in the hospital going on three weeks now, unable to leave his bed without passing out cold. The poor guy has COPD and six arterial occlusions...and those are the ones near his heart. Heaven only knows what kind of a log jam is going on elsewhere. One minute they tell him they're sending him to a full-on extended care facility, the next minute they tell him they're transporting him to the University Hospital in Seattle. Then they wander away and nobody tells anyone anything or notes it down in a chart. What the fuck kind of bullshit is this to pull on a sick, 83 year old man? He gets scared and depressed and calls me, and something is always lost in the translation, so I have to track down the real story...yeah. Onward through the fog.

Here is how I've been coping:
I have been doing a lot of gardening. My arms are so buffed out from digging and etc. that the veins stick out on my biceps now. I'm also doing the home improvement thing....building a fire pit, 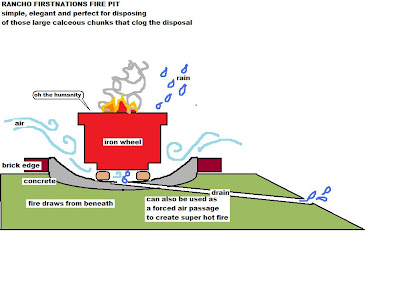 ...clickie for biggie
prepping one of the bedrooms for paint and paper, cleaning up and throwing out, and rounding up supplies to paint the house this August. Busting down junk and hauling it off. Turning compost. Making medium. De-chroming my new El Camino. Listening to a lot of Rob Zombie, Powerman 5000, NIN, and Snake River Conspiracy at eye-bleeding volumes. Dyed my hair blue. Switched from beer, which was making me tubby, to tequila and diet 7-up, which does not, but still tastes good.

Now when I was younger and gave less than a full-grown fuck about anything I would have, say, picked up a tire iron and taken out a public restroom. Glassed some cars, fucked something up. And it would have worked, too. You want to reach that clean, peaceful center of calm where everything just lines right up and makes sense? Take out a television with a ten-pound hammer. Seriously. It's much better than drugs. There's a couple of you out there that know exactly what I mean, too.

See, but I can't do that shit any more. Well I mean I can but I shouldn't.
I want to, though.
Posted by FirstNations at 8:09 PM 28 comments: Links to this post