Gather 'round, my darlings, for I am about to tell you of a wondrous thing. MJ, keep your hands to yourself. MJ I am serious now. Go sit in your chair. The one with your name on it. Right there. NO, right-just sit down.

I have to set this up for you.

I am an admitted scrounge, the type of person who leaves for the recycle place with a load of crap and essentially exchanges it there for the crap of complete strangers. I've never gone so far as to actually jump into a dumpster or wade through the squishy garbage dunes at the dump, right, but then that's why Edison invented the long stick too, isn't it.

Years ago, when I had my business, I could regularly be found striding (godlike) through the abandoned, accumulated evidence of college enrollment, sheer acquisitive stupidity, or extreme Obsessive-Compulsive hoarding, a salmon gaff in one hand and a spray bottle of bleach in the other, pitching and turning, looking for something that could legally be claimed as 'household goods of clear value' so I could put it in storage. (The way the laws ran then, a landlord was bound to store abandoned goods of clear value for 60 days before disposal; otherwise it counted against them as theft.) This dovetailed beautifully with my sideline - picking antiques.

I scouted out items that dealers were looking for, and then either re-sold them directly to the dealer or charged a finders fee when the object was too large to haul around, like a locomotive steam engine or part of a Bugatti. I have an eye for value. I knew the market and resale worth of items at a glance. I can tap an object with the back of my fingernail and tell you what it's made out of and how much it weighs. In short, I know my shit, and shit has been very very good to me. I have no fear of used. It's furnished my home, clothed and fed me. I have seen it all, handled it all, cleaned it all, and scraped it all off my shoe using the living room curtains.

My daughter in law runs a resale business down in Oregon.

...girl getty: 65 lbs of smokin' hot with an eye for a deal
When she isn't scanning Craigslist or other dark corners of the Internet* she's out garage sale-ing, buying low (or often not at all; people just load her van up and send her off rejoicing) and selling high.

She'd been telling me for months about one of the places she hits regularly for stock, a place she calls The Bins. It sounded legendary. Almost like a rumor, a faded 'X' on a timeworn map where vast Matterhorns of used goods gleamed in the sun with tiny little Swiss people yodelling from the summits.

The day after Thanksgiving we pulled into the parking lot. Before me was an enormous concrete warehouse, the kind of anonymous industrial box you pass by endlessly whenever you ride the train. The sign on the building read "Goodwill Industries Outlet Store."

Stop and consider that entire concept for a few moments. Roll the implications of that around in your brain.

When I was a child I remember my grandmother being rather appalled when she saw the charity trucks coming by to pick up household donations-to her, things were not meant to be disposable. Nothing was thrown away, everything was used, re-used, broken down for parts and used again. Not merely an expression of poverty or the times she grew up in, this was a moral virtue to her. You were conscious of what you purchased. You thought about what you owned beyond its immediate utility. As it so happened this building was located less than five city blocks away from her final resting place, and I thought of that and just shook my head.

We went inside and were confronted by a vast space, brightly lit by sodium vapor lights.

In front of us was a row of cashiers check stands. They stood behind a chain link fence that gated down access to the rest of the building to one small, guarded entrance barely a person wide, and one small exit far down at the other end, where people stood in a long line, shopping carts overflowing with their purchases, waiting to be cleared by a security guard.

I looked around. No obviously visible gun emplacements. Of course that means nothing.

The place was chock full '0 mutants. This was, in fact, the most concentrated collection of prime mutation I have ever seen in one place, and I attended public school in the 70's, yo. They wandered here carefree and proud, their native funk and corruption shed all about them like a path of glory trailing across the firmament, like Wilbur Whateley's twin brother, only visible and without quite so many tentacles and not three storeys tall.

In amongst them huge Mexican, Ukrainian and Guatemalan families roamed, complete with grandparents in wheelchairs, children in strollers and infants in rebozos. A few dealers passed among the crowd. They kept their shopping carts parked along the wall and covered with a blanket while they darted in and stabbed at prize items and then carried them away to their hoard. Everyone there in constant motion, circulating and circulating endlessly at a steady pace, picking and turning and flinging and inspecting and shovelling, rumbling through the stuff. 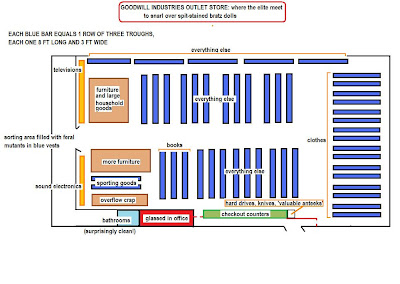 ...clickie for the havingness of biggie

On the floor were long rectangles marked off with speed bumps. Each rectangle held a row of wheeled, waist-high bins, or troughs, about 8 feet long and 3 feet wide. These bins were for the most part brim-full of random donated CRAP. It came right off the collection truck out back (a GODDAMN SEMI, FOLKS), through the pack of feral radioactive howler monkeys** sorters, went into a bin and rolled out onto the floor.

Two workers would come busting out of the back sorting area AT A DEAD RUN, pushing one of these bins and shouting 'STAND ASIDE PLEASE! STAND BACK! PLEASE STAND BACK!'
Two more workers would already be standing ready to pull a picked-over bin out of an aisle (they were timed!) Meanwhile people clung to it and exclaimed 'wait! wait!' and were pulled along or forcibly removed from the side. As the old bin was slid out the new bin was wheeled into place with no space left between them.

As this operation took place, the aisle on either side was already lined with people, people with glittering eyes, flexing their fingers and glancing around, packed shoulder to shoulder. The instant the bin came to a stop one of the attendants would shout 'OK!' and everyone would FALL ON IT LIKE STARVING HYENAS.

This building was huge, remember, and jam packed with people. Everyone was in constant motion, circulating again and again as the bins changed out, many of them staying for hours, reaching and turning and pulling and moving down a step and repeating it all again. I went off to one side and watched for a few minutes. Suddenly I was stricken by what this reminded me of, and I mean no contempt by this, now, its merely a fact, this is completely accurate and describes the relentless constant activity perfectly-maggots swarming on a dead cat lying in the sun. That same slow, steady, teeming activity.

The only difference was, the cat eventually disappears.

So everyone is just churning through all this crap, right, picking and flinging, pitch pitch pitch pitch, everyone with at least one shopping cart, some with two. (I caught several people picking through mine as I wheeled it along. Many people had blankets draped over theirs and were carrying sticks or bats to prevent this from happening. YES.)

Announcements periodically blasted forth from a glassed in booth: 'We are currently unable to accept personal checks due to a computer malfunction! Any children caught unattended will be detained in the office and their parents identified and expelled from the premises! Please keep the rear doors clear!' Security guards ambled through ejecting the troublesome, store employees snarled at unruly children and collected up abandoned carts. The cash registers were all working constantly, and when the computer went down briefly a palpable wave of nervousness went through the room.

We spent several hours there and I wasn't bored for one moment. I have never seen anything like this in my entire life. I am still trying to digest the whole thing. Here I was, surrounded by mostly average people, the majority of them completely lost in the purest expression of mindless acquisition I have ever seen in my life, like piranhas stripping a monkey. There was like an internal rhythm to it. Like a law or a rule-everyone shuffling along, picking and churning at the same ceaseless rate, not much conversation, kind of an unspoken rule of order happening but at the same time predators circling and darting, the same weak being pushed to the outside of the group repeatedly, the aggressive pushing forward for the first pick- goddamn. I mean, just, goddamn.

So if you're ever in America and you want a good, negative 'American story' to pass around to the folks back home, do give this place a visit. It's in Oregon. Tell everyone you know about it. You get to dine out on it, and hell, we have too much immigration as it is.

**thanks due Muttley for the phrase!
Posted by FirstNations at 6:10 AM 20 comments: Links to this post