Say hello to my new grandbaby!! Isn't she adorable?

If you've been paying attention to the news you'll know that we have some flooding going on here in Whatcom County. Here's what it looks like so far at the Rancho. Don't expect much excitement. A flood here means 'really deep puddle' instead of 'raging currents of death spreading watery destruction.' 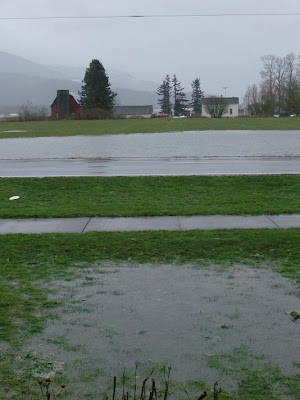 ...looking due south out my front door, we have my front yard, the street, and the hay field. 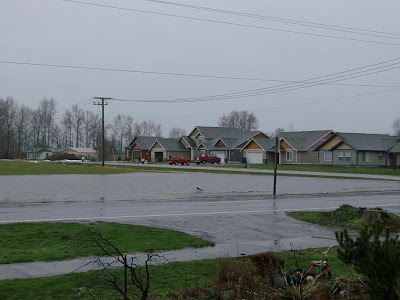 ...and turning slightly southwest, the corner of the hayfield where the t-intersection cuts across it.

Now for the backyard. Looking toward the grade school, north... 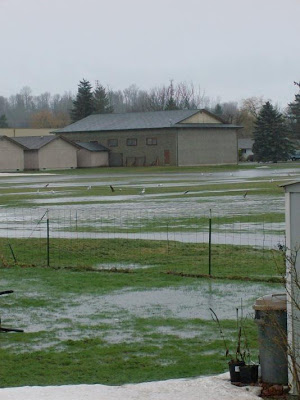 ...that was yesterday afternoon. Now lets take a look at it the way it looked this morning at 8:am... 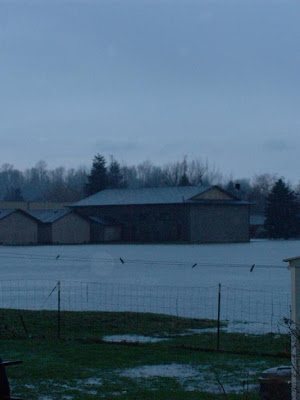 And now, this afternoon. 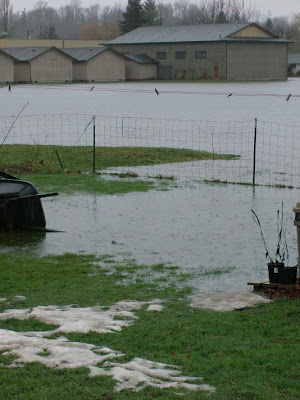 Look at the seagulls swimming around. This is looking northeast from that last picture... 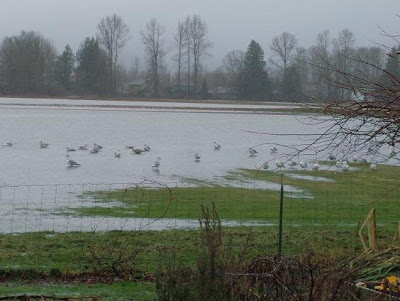 All morning long huge flights of geese and swans have been migrating BACK UP FROM THE SOUTH.

The rain is hitting in a succession of waves. We'll have nothing for 45 minutes and then it sweeps in again for a couple of hours. Fortunately for us, we don't live near any major rivers so there isn't any current to contend with.

We are, however, housing five flood refugees. The SSA, the Lucky Bastard, the Goonybird, their dog and cat got evacuated last night and spent the night here. They'll probably end up staying at least one more night before the Corps of Engineers decides its safe to go back to their area. Now, their property is in no danger, realistically speaking, but the area they live in qualifies as alluvial fan and so they got a blanket 'voluntary evacuation' warning.
______________________________
Yes, its been nonstop excitement here at Rancho FirstNations. I just had my very first blogmeet! Inner Voices and Cheese stopped by for a visit! 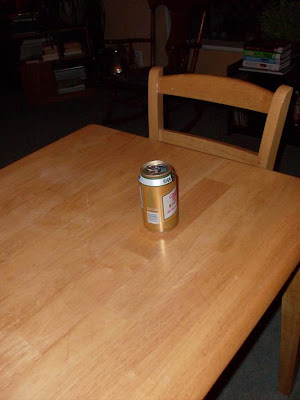 ...where the great man sat

No of course I didn't take pictures. That would make sense. I was so overcome with relief that y'all are in fact more than figments of my imagination that the last thing on my mind was taking pictures, yo.

They were kind of freaked out to find things so damp, so they cut things short and got moving up toward Canada, to do whatever hockey and Gouda-intensive Canadian activities they had planned up there. I will say this much...they are lovely people. 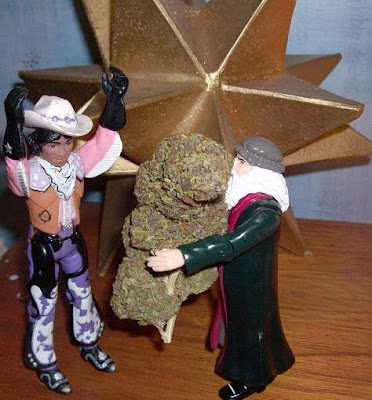 ...generous,too.
Posted by FirstNations at 1:15 PM 21 comments: Links to this post

Good Gravy Marie enough of that already.
OO! Theres a new one up at UJ! It's not very dirty, but it is inappropriate.


Deal with this, my darlings:

I FOUND THE MEADOWS BROTHERS ONLINE.

Don't know who they are? Scroll down to the tags window at the very bottom of the blog here and hit the ones marked 'Meadows'. Go by the numbers. Think of it as research. Think of it as another step on the way towards your degree in Abnormal Anthropology, a discipline which I just made up.

I cannot tell you how surprised I am. Mainly to find them both still alive, both in possession of higher technology, and apparently both still functional enough to use same.

I honestly thought that Kelvin would have committed suicide long before this. My guess (hope, truth be known) is that Kelvin is contacting the www from inside the sex offenders' wing of Rocky Butte prison, and that him being in seg is the only reason he is alive. But see, now that inevitably leads me to the thought...'Well, if I was wrong about him being dead, then maybe I'm wrong about him being locked down, and he's still out there on the streets, being.....Kelvin. And working in a grade school. As a night janitor."

Can you see where I'm coming from here? Really, honestly, if you live in the greater Portland Metropolitan area and you have children in any of the grade schools around there? Really? Leave me a message in the 'comments' section because we need to get together and talk. And the main thrust of this talk will be based around your busting out your parents' school directory and hitting the 'meet the staff of 'X' elementary!' page. Because, yeah.

If I could be a fly on the wall, I would love to take a peek at the kind of life that Eldest Brother is leading now, though. I honestly hope its a good one, and that it's being lived in complete isolation from the rest of his family. He always was cougar bait, that boy, and so my fondest wish for him is that he found some luscious older lady to please and was sole beneficiary of her vast estate when he finally fucked her to death. That would be awesome. I can just see him now, a cheerful chubber bear just entering a comfortable and certifiably insane late middle age... sitting amidst the oolong stains on a once-proud Ethan Allen sectional, wrapped in the Dorito-scented darkness of his living room, contacting Pay Pal in order to purchase another cyborg vagina slave* for his Second Life character.

Having found the Meadows Boys I then proceeded directly, without hitting 'Go' or collecting 200.00, to the Oregonian newspaper site and from thence, GoogleMaps. I needed to brush up on my Multnomah County geography, and fast. If this seems paranoid, just know that I am the official Murphys' Law poster girl. If there is a chance in hell that our paths might cross, that chance will happen to me. There I'd be stopped at a light, and the guy in the crosswalk will turn to flash me, and I'D recognize Kelvin, and-worst of all- HE'D recognize ME. I want to avoid that if at all possible.

So there I am tiptoeing through the newspapers. As I'm reading along about my old part of town, I keep stumbling onto these references to a place called 'Felony Flats'.

I'd never heard of it before. Huh. I wonder where that is. I'll take a look at a map.

...and right at its epicenter is Milwaukie, Oregon. My home town.

If you jigger around with the zoom feature, you can roughly bound the area known as Felony Flats by Sandy Boulevard to the north (traditional), Clackamas River Drive to the south, Mt. Scott Boulevard to the east, and the Willamette River to the west. Note also, as you zoom out, that Felony Flats is located just a short drive southwest of Wankers Corner, and southeast of Boring, Oregon. In case you wanted to, you know, visit or anything.

An interesting bit of trivia is that Felony Flats is one of the only ghettos in the world with an actual dormant volcano in the middle of it. Take a closer look. See Mt. Tabor there? Yeah. The City of Portland in its infinite wisdom decided not only that incorporating a volcano into a central metropolitan area was a good idea, but also to make it into a park. Sure, why not?...its just a deadly geological feature. Now, given what usually goes on in that park and the present unstable nature of the Pacific Rim faultline, one day here soon everyone's going to hear this loud explosion and look up in the sky and its going to be nothing but tweakers and naked people flying through the air. Followed shortly thereafter by flaming molten lava destruction with all fiery explosional destruction flames plus lava.

I was not all that shocked to realize that my old stomp has the reputation it does...only to find that reputation finally being openly acknowledged by the people that live in and around there. Of course nobody acknowledges the fact that the blight doesn't just stop abruptly at Sandy Boulevard. It never did. What happens is, the color of the majority of the inhabitants changes from white to black. But apparently it's only crime if it happens where white people are living, thus going to show that sometimes you can go back home again because ain't shit for nothing changed there, attitudes included.

Really, though, to cover the whole with a blanket appellation like 'Felony Flats' is a gross generalization. Many of the wealthiest neighborhoods in Portland are contained within those boundaries, like Laurelhurst and Top o' Scott, Waverleigh and Westmoreland-Reed and Willammette Bluffs. What remains is split evenly between quiet middle-and-working class suburbs, and total white trash slum. There is simply a whole lot more of it than there used to be.

I think what happened was that the slum portion simply got too big to ignore any more. A small slum is bad, right; but a great big honkin' slum is lots worse. And a great big honkin' slum in a part of the world where there never have been that many jobs and it rains all the time? You got some stupid, damp, pissed off white folks with a lot of spare time on their hands. And hell, a person don't always feel like getting drunk or banging close relatives, you know? Sometimes a fool gots ta break out and....you know, bury a drag queen ** somewhere on the property. I guess that's why people finally had to quit pretending that things were hunky dory. The elephant in the living room simply got too big to ignore. Or the dead drag queen. Either way.

*dibs 'Cyborg Vagina Slaves' for the name of my punk rock band. They'll play double bills with 'Bitchy Sister in Law and the Delusions of Entitlement'.

** no, seriously, you HAVE to read this article. It happened less than two miles from where I grew up.
Posted by FirstNations at 9:16 AM 10 comments: Links to this post