Pull Up Your Goddamn Pants You Fucking Moron: more butt humor for the masses

I remember back when the whole 'men wearing baggy pants' look came on board. It made me sad. All that fine denim-clad s-curved hine walking around for years was suddenly hidden from view inside over-sized board shorts*. It didn't seem fair. But after some reflection, I had to admit that not all men were meant to wear pants that fit correctly. If there's one thing I do NOT miss about the late 70's (aside from 'everything') it's men with big sloppy flubba-butts wearing shrink wrap pants. Man that was just nasty. NASTY!

Still, here's the deal: they were wearing pants. There was fabric between them and me. Not a lot, but its psychological distance we're talking about here as much as it is actual dernier, OK? You knew that stuff was CONTAINED. It wasn't going to suddenly break loose and run around going WOOWOOWOOWOOWOO like the Three Stooges.

Most importantly, you could rest assured** that you wouldn't ever accidentally have to SEE ASS.

And now this-and by 'this' I mean 'guys who wear their pants below their whole entire butt'. Not saggin'. I am not talking about saggin'. I mean the whole butt is hanging out of the back of the pants. The ENTIRE BUTT. HANGING OUT. ALL OF IT.

I don't know what this look is supposed to be conveying or who it's supposed to be emulating. All juggalo guys wear their pants this way; which is of course as one naturally expects from the developmentally disabled. 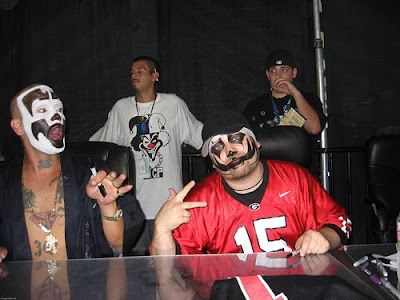 can you pick out which one... a. is only 14 years younger than his mother b. grew up in a single wide c. changed his name legally to 'Violent Hatchetman'?


But wearing your pants as though you've just filled them with shit isn't limited to the halt and the lame. Sometimes you see hip-hop looking guys rocking this look, sometimes meth-heads, dorkboys, rednecks... it just doesn't seem to matter.

For example, when I was in downtown Silverton last summer I saw this hipster kid coming down the street; black eyeliner, Hitler hair and all.
He was wearing a belt.
Cinched up tight.
BELOW HIS ASS.
He could not have pulled his pants up by tugging on the waistband in other words; he wasn't sagging. No, not in the least was he sagging. Them things were practically tattooed on. No, homeslice was doing this DELIBERATELY. Now even though I realized I was in downtown Silverton, smack dab inn the middle of the couture universe, I'm still trying and failing to cope with the sight of this Christmas tree farmers' slutty little 17 year old son taking tiny duckie steps down the sidewalk with his ENTIRE ASS HANGING OUT OF HIS PANTS.

I had no problem with the view as he came toward me. He was cute. Gave me a 'sup?' little nod, even. Hell, once he got close enough you could make out some dick-cleavage. I am all for dick cleavage. I am a huge fan of dick cleavage. But once he passed by I turned around to scope the back pasture and there was, just...... you know.

I cannot begin to describe what a complete buzzkill it was.

Guys, its stupid looking. And it's not even about the ass. It's

-well, actually most of the time, it IS about the ass. Like women and whale tails, it always seems to be the men whose butt you never, never want to imagine seeing who wear their pants like this. Still, you have to take into account the big picture. The whole enchilada. It's about the ass AND the underpants. Your hind end might be smokin hot; I'll never know. I won't care either. You know why? Because you're wearing guy's underpants over it.


Men need to not bother wearing underpants. Mens underpants are bad. They are pointless and bunchy and ugly. I don't even know why men wear underpants. You might think they're keeping your junk corralled; I say save your cash because thats already a lost cause, bucko. Brand new, mens underpants are at best depressing and vaguely medical looking. Once you run them through the wash a couple of times you lose all that sexy. You end up with a sexy which is a kind of 'are these my grandpas?' sexy. This is not a good sexy to have.

Do we see what I'm getting at here? Baggy wore the fuck out skivvies are what I'm getting at here. Look through your underpants drawer, guys. Do they really convey anything close to a 'come and get it' vibe? No they do not. They convey a 'my mom shops at Sears' vibe. Combine that with a less than optimum caboose and pants that hang down around mid-thigh and make you walk like you have a dozen bagels packed up your ass and what one is left with is the exact opposite of 'Let me enthusiastically sire many healthy children upon you'.

Now maybe if you're a 13 year old girl this kind of 'Woo! My butt is HANGING OUT!' retardation seems all daring and bad and therefore terribly alluring...the problem being that what you've just accomplished is to impress 13 year old girl. I mean, I once WAS a 13 year old girl. That's just....no. Guys, seriously. No matter how gross your ass is or nasty your underpants are, you can and should be aiming a LOT higher than that.