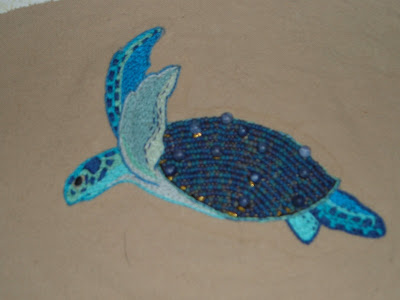 Check out your grumpy turtle!
I used your picture to get the face and the markings just right!
This turtle is not as angry as yours was, though; he's just kind of disappointed.

Ok.
When I wake up at three in the morning I want to wake up for a good reason. Instead I woke up at three thismorning because I was ferociously thinking about something I had gone to sleep idly considering. See, my daughter has a teacher who is convinced that Ingres is just a FANTASTIC artist.
The woman actually receives a paycheck to teach people this shit.
Ingres was not a fantastic artist. 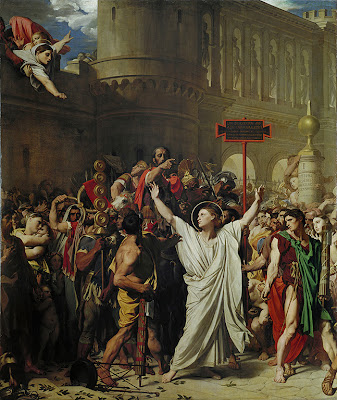 This is not a collage. It is a painting. Although it looks like he sat on the floor and cut random pictures out of a magazine and then pasted them to a canvas, you must remember that the magazine had not been invented yet.

Let's call in our guest hamster, B. Schmuggleware, young rodent about town and ENTIRELY WITHOUT ODOR, as you may recall. 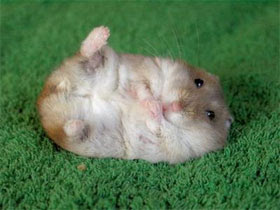 ...his fu is unbeatable

Mr. Ware, tell us in your own words what this is a picture of. Spit out the goddamn sunflower seeds first, though. And sit up straight.
_
Its.....wow. Ok. Um. Ok, its the barbecue scene from 'Oklahoma' and in the middle of it this guy doing star jumps knocked over a hibachi.
No.
...It's the Roman centurion dance number from Fame and everyone else stopped dancing but he's still going..."I'm gonna live for-ev-errr, Baby remember my name-FAME!' and the director up there is yelling at him. And a dog got in.
No, you silly hamster person, it is obviously the Martyrdom of St Symphorian!

...See; he is defiantly forming the letter 'X'! It's a symbol! X for No! X on sacrificing to pagan gods! Defiant, noble X to that crap right in your face! DEFIANTLY! Then they kill him.

Never mind that nobody in this picture occupies the same frame of time or space. Each and every item in this picture plane is completely unrelated to anything else. It's like a prop closet. And everything is marked out in a completely different light, which comes in from completely random directions, as though they were all watching a fireworks display, only it isn't night and they didn't' have fireworks, except for in China, but this is supposed to be Roman Autun so there you go.

The castle-y tower-ey wall thing in the background there just makes me sad. It has been the victim of an act of senseless, random miniaturization. No. Let me cry.

As you can see, this was a man to whom perspective was a complete mystery. So much so that I honestly think there was some kind of physical impairment there. The popular opinion holds that this was purposeful exaggeration on his part, but even a casual overview of his work gives lie to that. The guy just had no damn depth perception. It gave his pictures an odd quality...some things appear as though they are stamped upon the outside of a ball, they have that distorted, swollen, fish-eye lens look. 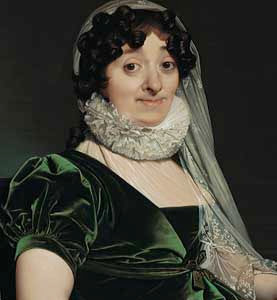 When the sitter was less than classically beautiful this could have really unfortunate consequences. 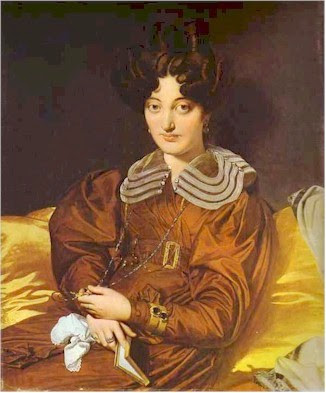 Things he likes are big and detailed and REALLYREALLYCLOSE. Things he doesn't care much about are small and barely sketched in. Each item is portrayed from it's own separate dead-on point of view, giving the whole the appearance of a luxury store window designed by a profoundly stoned child.

Ingres was also desperately uncomfortable with the undraped human form. 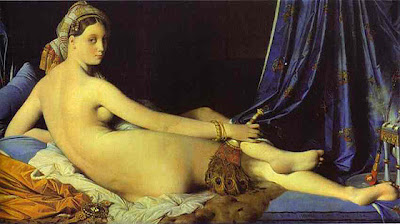 And let's not forget the guys... 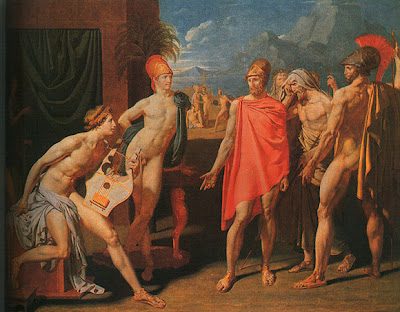 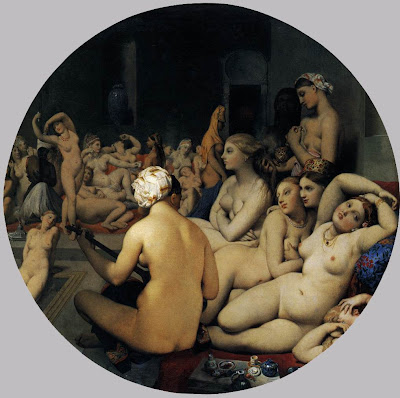 Here we have as lascivious an image as Ingres was ever to produce. Bare nekkidness as far as they eye can see. (I mean, no fluffies or anything; that would be gross.) There's even girl-on-girl booby honkage going on. But what you see are aaaaaaarmssss. Successive undulating waves of them which disappear into the distance like a seascape full of pink water balloons. It's one of his hallmarks. Most of his depictions of women have this trademark erotocized, plump arm.

Hand it to the man, his craft technique is fantastic. His paintings are beautifully finished objects. Furthermore, as is plain from his portrait drawings, the man can capture a likeness. He knows about texture and color, but he tries to make it all patch over his shortcomings in the depth of field department.

And that's what gives his work this odd, 'ahead-of-it's-time' modern look. Nearly all his stuff has the odd, flattened out, discontinuous look of modern art that is trying too hard. But that wasn't because he was a rebel. It was because he needed laser surgery.
Posted by FirstNations at 1:08 PM 30 comments: Links to this post

You are going to get your request, Tim.

Where did he go?
I want him back.
He is my beastly bud.

crap.
Posted by FirstNations at 8:18 PM 11 comments: Links to this post

When I was a kid we lived on the West Coast in a small town which is now a suburb of Portland, Oregon. My fathers' side were original pioneer settlers there.

It was an agricultural community to start with. My first generation dad would point out with disgust how whatever new shopping center or paved roadway used to be Gundersons' farm or Bardo's dairy pasture and what a shame they sold out during the depression. Or Nokamura's radishes, or Watanabes' celery field, and how they'd lost their land during WWII. Of course , they had to go. They might have been spies and helped the enemy. You couldn't take chances back then.

Which is how I grew up knowing about Japanese interment camps and never thought a thing about it.

When I was about 10 my grandfather died and a box turned up in his stuff. When it was opened it turned out to be filled with photographs and legal documents that belonged to the Watanabe family. My dad went through the whole thing...laid it all out on the table, had my mom read him the papers, went through all the photos. Some of them were extremely old... cabinet daguerreotypes with weddings, babies, stuff like that, things that came over from Japan.

My dad wanted to throw it away. Because it would 'just bring up bad memories' and 'it's just a lot of old stuff anyway; they've probably forgotten about it, if it'd been important they would have got it already.'

Now they might have been fighting at the time; probably. I don't remember. Anyway my mom made the phone call. (Small town, small phone book, few Watanabes, all related.) My dad stood in the background red in the face hissing 'Why'd you have to go and embarrass me like this for?"

The entire Watanabe family came over. Tiny, tiny little Great-grandma and grandpa came too. Grandpa was so frail that two big boys held on to him and helped him walk. He was swimming around inside of his best suit from about 1940 and wore a big old fedora hat that rested on the tops of his ears. He shook my dads' hand and thanked him and they lead him back out to the car to sit down.

His wife stayed and looked through the things and cried. She was overcome, and had to sit down, and everyone hugged her, and she rocked back and forth. The whole time somebody was thanking us and shaking our hands, and I mean me, too.

That little elderly couple had been in the camps.
Their citizenship papers and land titles were in that box.
The family's history was in that box.

As you might imagine, growing up with these people and having a different racial heritage had it's difficult moments.
Posted by FirstNations at 7:53 AM 27 comments: Links to this post