Right in the lungs. You passed Prop 8? You evil, bigoted hypocrites. How dare you legislate discrimination in my country. You make me ashamed to be American. 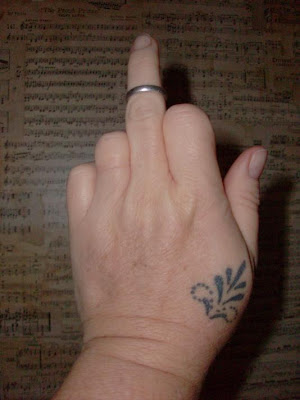 I add my fickle finger of fate to that of Joe In Vegas and Heather.
There's my wedding ring. That represents 22 years of marriage. I've upped it with the tattoo I got that represents my permanent commitment to my family. I put all that behind my convictions here,. I will not tolerate this bullshit in my country. Repeal Proposition 8 NOW.
Posted by FirstNations at 8:30 AM 22 comments: Links to this post

My husband is the type of man who might just happen to have a whoopee cushion on him at any given moment, sadly. He is also the kind of person who thinks it's real funny to gives said cushion to his four year old grandson. Who subsequently ran around for the rest of the evening frapping it loudly at people and then collapsing on the floor in hysterics. This made it difficult to follow Antiques Roadshow (shh, honey, quit farting for a second; grandma wants to hear how much the Victorian nipple electrodes are worth!) until his mommy took it away from him. And started farting it at people and collapsing in hysterics. This proves a. that there is such a thing as genetically heritable disposition, and b. we are a real classy group.

Despite the rain, this leaf season has been unusually brilliant. The deciduous trees that color up look as though they are artificially lit. I took a few pictures outside: 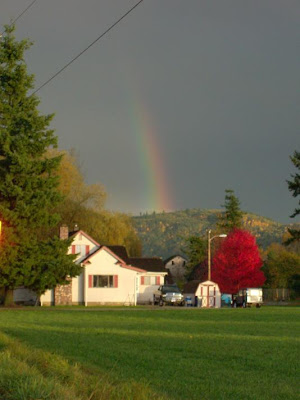 Welcome to the view out my front windows as of yesterday afternoon! Let's start by looking northeast from my front porch. What ARE they growing down in that white barn? 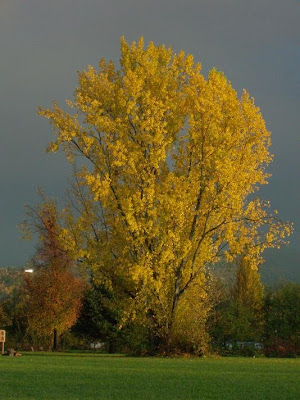 ...moving ese...the twin to this tree used to stand in the middle of my driveway. 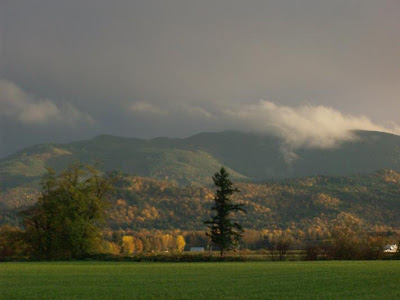 ...southeast, toward Tweaker Hill (or Kendall, as its known on maps) 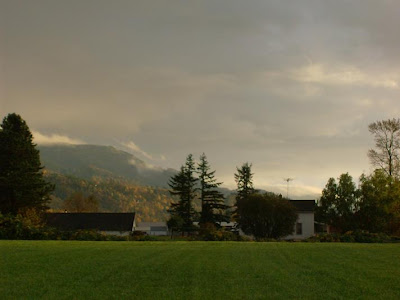 ...and straight south.
Let's give my zillion dollar view a big hand!!! This view is one of the many reasons I keep saying that Bill Gates has nothing I want. And I'm serious about this too. CALL THE SALVATION ARMY BILL. REALLY. NO REALLY QUIT IT BILL. GO AWAY. 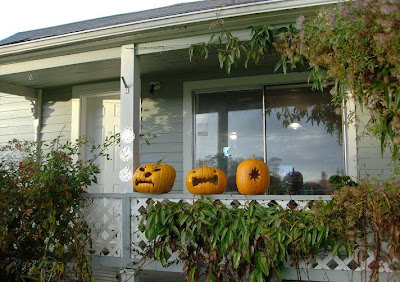 ...the full horror becomes apparent after a week out in the weather. 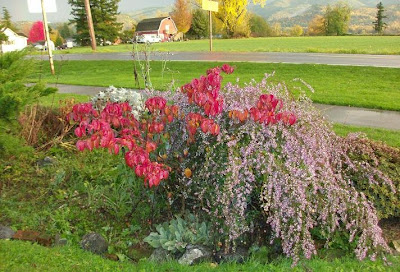 ...This is the Opie tree looking spectacular with a wild and crazy black cohosh coming up through it 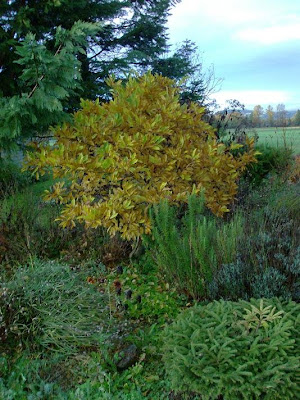 ...and this is my favorite little magnolia stellata going off like fireworks.

Now that we have worshiped the glory that is my view, lets take a quick rip through the galley, shall we? Yes, lets!

The best thing about being my age is that I finally know how do some things with a certain degree of expertise. It's taken me years to finally get to the place where I think that I know a little bit about how to make bread, for example.

Out of everything I've set myself to do, learning how to work with fermentation and grain flours has been the one that turned out to be the trickiest. You can produce a pretty and edible loaf of bread on your first time out provided you can follow a recipe carefully, of course. But to really turn out something that can stand up to an informed opinion means years of practice. You have to develop a knowledge of your materials, tools and even climate with all five of your senses. The only way to do that is to just plain make a whole fuck of a lot of bread. And eat a whole lot of bread, and read about bread, and baking, and flour, and yeasts, and talk about bread, and basically turn into an obsessive with a bread grudge.

At first, when I was around 10-11, I was afraid of the breadmaking process. The dough is all...weird. It was messy and floury. But I was bound and determined that I was not going to be defeated. My grandmother used to make bread every three days from the time she was eight years old for heavens' sake, and she worked with salt batter, sourdoughs, wild yeasts and nonstandard flours!!!! If a barefoot kid in a covered damn wagon could make bread in an iron pot then I damnsure was going to make some bread too.

Making bread is a basic human skill. Once you get into it your realize that you make bread by feel and by intuition moreso than by recipe or technique-once you dig your hands in you can understand how a bunch of pre-literates could have come up with it. The ability to make fermented (and thus easily digested and long-keeping) protein food out of grains is the one thing that separated us forever from the hunter/gatherers. Making bread is how civilization started. People think its agriculture? Oh lord no. Agriculture is just planting seeds in convenient places; good lord, robins do that. Mice do that. Civilization started from the need to settle near the supply long enough to not only plant, guard and harvest a crop, but to husband the final product through its different stages of refinement as a food, document the changes, record the amounts, and store it. As beer.
Yup.
Bread was not the intended final product. Bread was just a stage on the way toward making beer. Which proves that our ancestors were smarter than we are.

Because I am only partially civilized, I just make bread. In this case, challah. 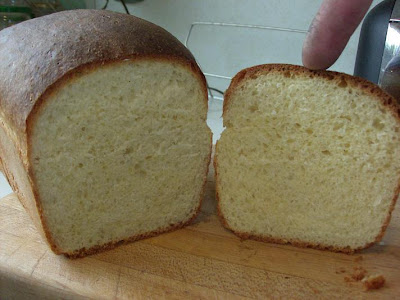 ...with a scroungy old Yummy Biker finger serving as a prop there upper right.

This is the best loaf of bread I have ever made in my entire history of making bread, and its also my favorite bread in the entire world. This, friends, is a challah for the ages. A resplendant challah. A perfect challah. Usually its braided, but this time I wanted it for toasted sandwiches so I left it loafy (which is a word because I said it was.) The next time I make it I'll braid it, because I'll be celebrating. Do you know why they braid it? So you can pull it into nice pieces and throw it. Yes. This is a fact. Apparently, you hand bread to people who are mourning. You chunk bread at people who are celebrating.
Consider yourselves chunked at!
Posted by FirstNations at 7:49 AM 35 comments: Links to this post