As you all know I used to be in Led Zeppelin.  But now I have a new band called 'The Frankenstein Vikings' which is: Frankenstein, Kenny Rogers, plus Me!  WOW I know.  This is our hot new single  'Freebird'. (Now you have to hold up a lighter. Go find one.)


OK this is the song.


I was walking through the woods with my best gal Brenda
I had to make a move and I wanted it to send her
Maybe a bear would attack us, and then I could defend her-
But no bears showed up.  Then I found a blender.

I ran down the siding and I jumped a freight car
Just the clothes on my back and an old steel guitar
A blind man stole it just outside of Enumclaw
Then his monkey bit my ear off. It's name was Francois. 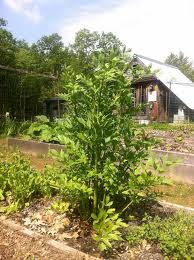 Lovage is about the easiest thing in the world to grow besides maybe dandelions.  It even has things in common with dandelions...it self-seeds, you can teach it to repeat simple words, and if you eat too much you'll piss your kidneys right out of your body.  USE LOVEAGE WISELY.  Don't wake up at 5:am tomorrow morning and decide today is the day you'll eat nothing but lovage for the rest of your life, because if you're stupid enough to do that then you deserve to have your kidneys land splat on the floor and I'm not going to stop you.

You can read all kinds of stuff about lovage on the 'net, and most of it is repetitive and doesn't help much.  Do you care that "The esteemed Irish herbalist K'Eogh noted that this highly aromatic and giant-sized perennial "expels flatulence; clears the sight; removes spots, freckles and redness; provokes urination and menstruation; and aids digestion." ??  I personally do not give a flying fuck.  Although I had no idea that the Irish had such quixotic surnames, or were interested in the expulsion of flatulence.  Don't they do it like everyone else does?  Is improper expulsion of flatulence a problem for the Irish?  If you take this guys' word for it the Irish have all kinds of things they should be worrying about, plus Enya, and the proper use of loveage, which is 'as a weapon'.

Loveage has an aroma of celery, if celery smelled even better than it does now, and lets face it that's actually pretty darn good.  But now imagine celery, only more concentrated, more perfumed, with a hint of fennel, fresh green basil, and line-dried laundry of all things.  Oh yes!  Now you're interested!  Well it does smell that good.  And it tastes that good too. It tastes amazing. Just minced lovage in an omelet is unbelievable.  Oh hell yeah. Or in a Vietnamese lettuce wrap... or in pho, in salads, with tomatoes, on burgers, IN burgers, in stocks....and good heavens, what it does for a soup, particularly if there's chicken lurking about in the wings.  Get it? Because, chickens are like theatres, and soup.  I'm glad we've cleared that up.
What I am trying to convey to your brain is that lovage is something you need to eat more of now.  Right now.  This shit is delicious.

Lovage is a real meal-type vegetable, unlike supermarket celery which is crunchy water held together with fishing line.  Nobody would eat fried celery by itself because that would be flabby and revolting.  You can fry the crap out of lovage, slap it on a plate, and people will give you money for free! And even if the thought of food with too much delicious makes you feel sinful and dirty you can still just settle for chopping up the young leaves and stems and using them exactly the way you'd use celery.  I understand you can even eat the root.  I haven't done this.  No I will not tell you why.

Lovage wants rich, neutral, average soil that stays on the wet side.  Full sun, part sun, front yard, north side of the house, it's fine.  Basically you stick lovage in the ground, you water it, stick some steer compost on it, and it sulks for a year and doesn't grow very tall.  But then the next year and forever after it grows about 6 - 7 feet high.  Now if you live in someplace that's only a state because we felt sorry for it, like Nevada, it will just die after a year so you guys are stuck with both celery and Nevada.  But if you live in Washington which is super ten thousand times of coolness, then lovage will grow and come back every Spring for what they say is twenty years or more.  I believe it; I've had it for four years now in heavy clay soil, planted in the most unprotected, dank,  floods-every-year part of my back yard and it hasn't noticed a thing.  And the shit is 6 ft. tall.  Or it would be if I hadn't cut it back because it was 6 feet tall.

Mature lovage plants end up looking a lot like several other plants, one of which can kill you:  Water Hemlock. Please don't be dead.  Buy your lovage plant from a regular nursery.  DO NOT buy lovage from some random grange fundraiser. Those little old ladies have cataracts, man. They get all drugged up and go pull shit up out of the lawn and then they stick it in a pot and throw out the first name that comes to mind. Yeah, that's a tulip. That kind has thorns. They don't care.   I NEVER buy edibles from plant sales. Don't you do it either.

Have I scared you?  'OO!  I'm too scared to buy lovage! I could die!'  PLEASE.  Be scared of something worth being scared of. You could be Irish and have gas.

Posted by FirstNations at 7:33 PM No comments: Links to this post