I am pleased to say that The Playboy of the Western World survived his final cardio assesment. You might recall that he momentarily died when he was injected with whatever heart accellerant crap they injected him with last time.

See, to me, the very fact that he is physically incapeable of the relatively gentle exercise needed kind of indicates that yes, there is a certain amount of cardiac stress already occurring here. But no, they wanted to be all scientific about it, so they sent him home (to stress out for three weeks about the upcoming do-over) made him starve for half a day beforehand (more stress) with no coffee or chocolate (inhumane levels of stress; I bought him a cheesecake) and then called him back in all early in the morning and shit so he could sit in the damn waiting room for half an hour after his procedure was scheduled AGAIN. And stress.

So we're cooling our heels, reading magazines together when I turned the page to reveal this advertisement: a big green wino monster with crap all dripping off it and huge block letters which say KISS ME I'M MUCUS!
We both went 'Aaaa!' and I tossed the magazine aside. The receptionist almost knocked her chair over.
Cardiac patients who jump and say 'Aaaa!' in the waiting room is probably one of the things she's trained to respond to as an emergency.

Finally they take him back, injected him with meth and shoved him in the easybake oven for twenty minutes and placed bets or whatever goes on back there. They wouldn't let me come back with him so I don't know. I'm left jitterbugging on the worlds most uncomfortable waiting room chairs reading back issues of People magazine so old that Jennifer and Brad are still together and thinking 'You stupid, stupid woman; thats BRAD FRICKEN PITT and you just let that run around off-leash like a dog at the park. Serves your moron ass right he ended up with Fishlips.'

He survives part one.
They roll him back out to the waiting room with a candybar and a bottle of water, and then 45 minutes later they DID IT ALL OVER AGAIN.
Twenty more minutes of wriggling and flumping from cheek to cheek on the giraffe legged cement chairs wondering if he's coming home in my car or the coroners van.

He survives part two.
And we hightail it out of there. And I mean he was banking up the corners up on two wheels like Dukes of Hazzard. I had to scamper up in front of him to open the doors and just impressed the hell out of myself; I can still scamper with the best of them. Dang.

Lunch at the Olde Englishe Halfe Timberede Lesbiane Bar. The waittress hadn't even fully greeted us before he looked at her over his glasses and cut her off. 'Coffee, honey' he said in regal tones. "It's been awhile. And SHE takes cream," he added, gesturing towards me.

I love this man.

Back to the Leopold. As I pull up to the porte cochere a lumpy old gent just wandered right out in front of the car and went lumbering cluelessly across my bow. " Oh that's Mr. Whatizface" says The Playboy. 'You can hit him.' He did look well insured. Still, Mr. Whatizface was a pretty solid looking chunk of geezer, and I drive a compact, so I asked if I could take a pass and The Playboy agreed.

All I can say is this better be the last time they pull this shit. His recent medical adventures are largely the result of his doctors not communicating with each other (I've seen it in action. Or not in action. Happening, anyway. Or not-oh fuck it.) All of them are trying out their pet theories one after the other. With my father-in-law as the subject, getting batted back and forth to various clinics and testing facilities like a well-insured ping pong ball with a walker, all covered with cotton balls and sticky tape. I mean come on. It's still a small town here, folks. Most of you see each other every day. Barring that there's email. What? Go old school then. None of these people can pick up a damn phone and arrange a conference call? What?
Welcome to Bellingham, home of the nations' C student medical school grads.
I SAY: Get over yourselves and do your fucking jobs.
You are pissing me OFF.
This you DO NOT WANT.
Posted by FirstNations at 9:28 AM 18 comments: Links to this post

It has been an interesting holiday, my darlings.
SWAG:
Almond Roca! (four pieces left) 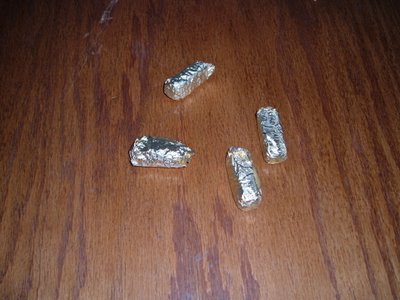 Handcrafted designer beer! (gone, baby)
Decorative fairy lights shaped like little chili peppers for my kitchen snack lighting!
A t-shirt with the word 'SEX' on it!
Casho dollars and buckolas! 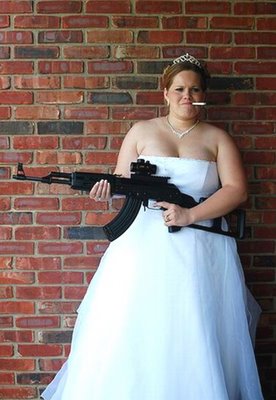 My daughter is getting married!
This is excellent news!
The Poor Bastard is a super good guy. He is great with the Goonybird and generally a really quality human being. He seems to have the Amazon's number, too, and this speaks well for him. I am all for this.
But the wedding?
A wedding?
I never had one, and I've been married twice. I never dreamed of one as a little girl either...Sure, give me the princess dress and the pretty cake. If you want a show, go to Vegas. If you want a ceremony join the Masons. Intimidated and without a clue; that's me. Great mother of the bride, don't you think?

My husband has a new job! He is now TORVOLD DOGSWALLOWER, WIELDER OF VOLCANIC HELL-BORN FIRES, ARMOURER TO THE IMMORTAL GODS!
Oh fine. He works in an aluminum smelter.
Yes I know. I do. I wish I didn't.
Now, this is a real job. This is American working-class heaven, in fact. The benefits package is actually the size of the Whatcom County phone book. 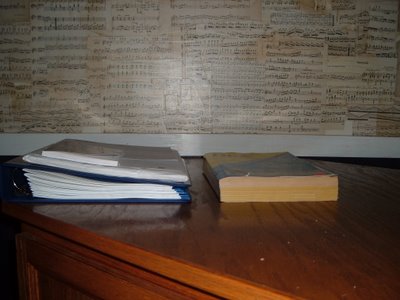 The pay is obscene. They hand out overtime like big crazy overtime-handing-out guys who hand out overtime. The company ranks number one in the world for its' high standards of job safety. (It's Alcoa, not Reynolds, in other words.)
It all seem like a devils' bargain to me. I wish I could shake this. After all, he qualified with flying colors on the preliminary medical exams. He is smarter than me and any of you all put together. And of course HE is convinced that he is sixteen, bulletproof, chews coal and shits diamonds. Meanwhile I feel like he is being deployed to Iraq.

Holiday misadventures: none. Despite having a houseful of stray bikers, grandkid (that's half a houseful right there) and sleep-deprived Amazon, only one minor skirmish occurred over the steaming pots, where I was accused of being touchy. Which I am not. Am not, am not, am not. I was, however, hung over and trying to make conversation while simultaneously performing delicate and complicated cooking operations over a red hot stove, and certain people were doing that 'question every move I make and stand right over me and stick your nose into everything and demand snap answers' THING THEY TEND TO DO instead of staying out of my face when they can clearly see that someone is busy and they should probably go away and watch that "Rudolph the Red Nosed Reindeer Prepares Human Flesh' show; which if that's what it was really about I'd be watching it too instead of COOKING YOUR HOLIDAY MEAL which I've been managing to do unassisted for a number of years now.

But really, one of the things we do best here at rancho FirstNations is provide warm and happy holidays. Nobody gets drunk, passes out, falls into the Christmas tree and splats facefirst on the floor with their pants around their ankles (one of my favorite holiday memories involving my father) Nobody has huge embittered arguments. Nobody gives or receives humiliating 'joke' gifts. The police are not called. No one sits in stupefied boredom staring at the 1120th annual holiday parade of scary inflated shit and marching bands on television. The sound of formula one cars is not heard throughout our land, nor are the electronically enhanced cheers of drunken sports hordes howling for blood from their televised arenas. We sort of romp and roam and munch and cook and make phone calls and mill around happily, play with toys, roll on the rug with the Goonybird, nap occasionally and then wake up and do it all over again. And the chow is always excellent. This year was no exception!
The Biker made a glazed ham; a perfect, flawless ham, a tender, pink and juicy ham. I did the overly complicated gravy, and a butter Yorkshire Pudding (a drippings one would have been kinda ick, under a ham and all.) The Goonybird ate mashed potatoes and peanut butter sandwiches. Don't Be A Dick, the stray biker, brought premium hoity toity beer, and the Stainless Steel Amazon brought chocolate cake and wine. There was other stuff too. It's all a blur. Ask the dogs; they made out like bandits. 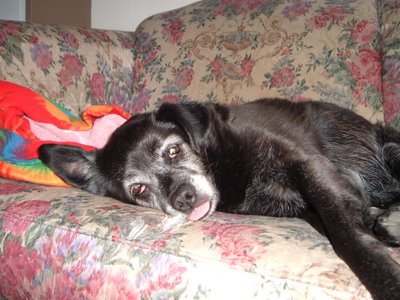 partied out dog on partied out couch
Posted by FirstNations at 9:16 AM 32 comments: Links to this post