What has FirstNations been doing lately, you ask?

1. Not doing a hell of a lot to quit smoking.

2. Gauge'n her ears out. I am presently wearing what appear to be large stainless steel curlicue fish hooks though each earlobe and while I don't recall the exact gauge they are about as big around as a common framing nail. They look wicked cool and divert attention away from the fact that I am 50, and dye my hair. Seriously. It works.

3. Chillaxin' here at the Rancho next to the heater while the ass half of me freezes (1 degree Fahrenheit, which is 'Shit, we ran out of degrees it was so fucking cold' in Celsius) and the other half of me watches large pieces of other peoples' barns whip past at 30mph. Well, actually that was the week before last. It snowed at some point during the proceedings but it all turned into freezing white sand and blew away north someplace. Of course, the only thing north of here is Canada. And our used snow. So that's OK.

4. Trying to offload some excess muffin top after a Lucullan Thanksgiving at my sons' place. Two duckies, half a delicious sugar saturated pig bottom, lots of gravy and gratuitous usage of butter makes Muks chubby. You too.

5. Slapping on the Retin-A with the same clandestine recklessness as Michael Moore hiding in a rented room with a jumbo sized jar of Nutella and a big spoon. And the news is: the stuff WORKS. I mean, the stuff works crazy good. Are you all old and shit? Run out right now and get you a big ol' Costco-sized jug of Roc and start slapping it all over yourself. It actually reverses time. Did you see that Superman movie where he makes the world revolve backward so fast that time itself reverses? Exactly like that. I now look just like my third grade class photograph.

6. Making a lot of bread. Loaf bread, not money bread. Although you'd be happy to pay money to eat this bread because it's really that good. I turned out a challah for Thanksgiving that would have made the Pope reverse his circumcision. Really.
In the quest for better bread I even made myself a new little friend: it's name is Dave, and it is a sourdough starter that lives in a mason jar in my kitchen. I feed Dave some flour and honey and a little of this and that and then shake the living daylights out of it a couple of times every day and then when Dave gets good and bubbly I dump off part and make bread with it. Owning a Dave is like owning a dog....it smells funny, its gassy and you have to feed it every day, but unlike a dog it doesn't hump the baby or eat cat crap.

7. Working on a super spectacular post about Canada, which is a secret.

9. Sitting underneath a nice new haircut, which is really really short.

10. Owning three new tattoos: an einkorn plant on the inside of each forearm going from the center of my palm up to the inside of my elbow: 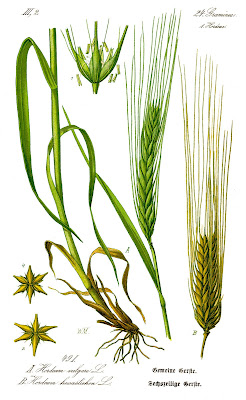 ...this exact picture, only I copied it so it would be one whole plant and made the roots look better and drew in a taproot that ran down into the lifeline of my palm which didn't feel real wonderful but was worth it, plus both plants mirror one another which looks awesome.

...and a nice picture of John Lee Hooker on my left shoulderblade. Jimi Hendrix is next up, and he'll be on my right shoulderblade. And yeah, I know exactly what you're thinking and you should get your mind out of the gutter.

What are you doing?

Posted by FirstNations at 8:13 PM No comments: Links to this post