Yesterday evening the Biker and I went to our weekly therapy session, and I found myself regaling our counsellor with the following tale (apropos of what exactly I don't recall.)

I had an arrangement with my parents the year I was 16. I would, without complaint, accompany my mother to every single one of the crackpot, embarrassing, bizarre, humiliating, excruciatingly awkward religious events she attended, and in return I got to continue to live in their house*. I've gone into the reasons why this arrangement was made elsewhere; the short version is that my mom wasn't going to put up with anyone who was 'possessed by an unclean spirit' using her bathroom.

That any arrangement was made at all was sheer lucky timing on my part. Shortly prior to this my mom had found Jesus, and apparently Jesus doesn't like for people to turn their daughters out in the street. Now I was grateful as all heck to Jesus for the opportunity to continue to sleep indoors, and maybe I shouldn't complain; but to tell you the truth Jesus- who was a great guy otherwise- could not manage his money for jack shit.

Fortunately for him, as long as my mom was around Jesus never had to worry about his credit rating.

The only thing about any of this that benefited me personally was that it got me out of the house, and gave me an opportunity to meet a entire sector of the American public that I never would have known existed otherwise.

One day my mom decided that we were going to go to Las Vegas and see Kathryn Kuhlman. And so it was done. The woman who saved bacon grease until it grew an afro and hoarded boxed muffin mix in case another depression suddenly hit coughed up the wherewithal for a couple of round trip airplane tickets, two event admissions and a sizable 'love gift'...and my dad drove us to the airport.

Kathryn Kuhlman's popularity is difficult to describe to anyone who isn't familiar with 'Born Again' evangelical culture. How she was able to get away with what she 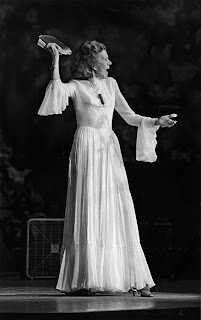 did for as long as she did is a testimony to the same American tendency to 'willing gullibility' as was noted by that other giant of the religious community, Aleister Crowley. Weighing in at maybe 70 lbs, standing about four foot nothing, with bad hair and a voice that alternated at random between alto and baritone, you could not call her physically compelling. Her preferred dress was white chiffon. When I saw her she'd added a cape and train, wizard sleeves and a Mary Poppins neckline, all of it edged in scallop.

This show was one well-oiled machine. She had an orchestra. She had a choir. She had soloists. She had costume changes. She also had a crack team of gimps. 'Patients' on gurneys parked around the front of the stage with 'nurses' and 'doctors' in exaggerated attendance, a large coterie of the 'differently-abled'; the whole crowd of them clearly playing roles, slicker than hell. I'm not being bitter here. It was so clearly rehearsed and had been repeated so many times that it looked as mannered as a kabuki theatre production. While whatever passed on stage took place, the folks down in the pit area on the floor ground through their accompanying routine...a nurse suddenly rushing to the side of a patient struggling to get out of their wheelchair...two doctors holding an impromptu emergency consultation while one of the gurney folks showed the first signs of consciousness in years; ushers rushing to their sides and then whispering loudly to one another 'She was blind for 14 years! She says she can see shadows!' and sending rumors up through the crowd**. All clearly cued by orchestral flourishes, key lines, and the ends of songs.

I had been under the impression that we were here to attend a revival. After a short while of watching it,though, I thought 'Oh, OK. This is like a play' and settled in to patiently wait for the whole weird-ass thing to be over.

I was right, as it turns out. This was a theatrical performance, in the same tradition as psychic surgery, the medicine show, and the carnival pitch . It even has a name. It's known as the 'straight healing service'. What Kathryn did was, she got the crowd whupped up, stuck her hand on people, they fell down, and it cost 65$ a head to see her do it.


Meantime Kathryn is healing the halt and the lame hand over fist. A long queue of people snaked down through the aisles and up onto the stage. As soon as she'd stick her hand one one person WHAMMO down they'd go like a sack of crap. The ushers would expertly catch them under the arms and hardly have them drug off before the next one hit the floor. People in the audience were standing and waving their arms in the air, speaking in tongues! Huge ovations went up when the formerly speechless uttered their first words in years! Plane crash victims with both feet sewn to their faces gave eloquent testimony! Cancer patients who'd had their entire brains removed calculated square roots! The crowds went wild!!!!!

And all of a sudden Kathryn stretched out one scrawny arm and everything HUSHED.

The whole place-silent. All eyes on her. 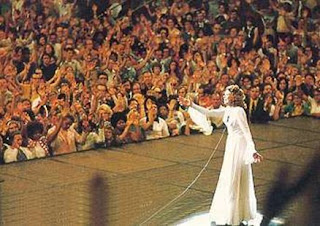 She swept to the very edge of the stage, faced 'A' section, stretched out one arm like a flagpole and announced "SEIG HEIL!"

She stretched out one arm like a flagpole and announced "FEEL THE POWER OF GODS LOVE!"

And every single person in 'A' section went down like they'd been scythed.

She suddenly darted across to stage right! Stuck out her arm toward 'C' section and shouted "FEEL THE POWER OF GODS LOVE!"

Every single person in 'C' section hit the floor.

I'm seated in 'B' section, center floor, with my mom on one side of me and her best friend on the other. We are standing up praising the Lord with our arms upraised. Everyone around us is speaking or singing in tongues, moaning, swaying, crying, laughing...

Kathryn sweeps to the center of the stage, and out goes the arm. She's pointing at us. 'B' section falls silent.

And everyone in 'B' section goes down like dominoes.
Every single person.
All of them.


Now imagine for a moment that you're a 16 year old girl who's been told that she is literally harboring demons. I showed up at this event carrying quite a burden of guilt and shame and fear. And lest you think I had my mind closed, know that I did not, not this early on; I was all for Jesus and love and forgiveness and God. I thought that a lot of what I had already seen was sad and embarrassing, but there was enough sincerity floating around to keep me hoping that maybe I was just missing something and that eventually I'd 'get it'.


These people were all nuts.


* instead of at the Perry Center Home for Wayward Youth, where my cousin was currently being raped by the staff and her fellow inmates.


**How obvious was it? When the program was over and we were all filing out, the 'doctors' were helping stack up folding chairs.
Posted by FirstNations at 10:29 AM 8 comments: Links to this post

Labels: My mother and religion

I am here to tell you that money most certainly does not buy happiness. It buys choices, as the saying goes, but you can have a whole pocket full of cash and a whole array of choices and still be having an absolutely suck time.

This is the first time in my life that I can say that; at least the part about money. The Playboy of the Western World (my father in law, now gone to that big bath house in the sky) left us pretty well off. Having money is definitely better than the alternative, but it made no difference in the quality of the suck factor when everything around here decided to take a massive shit.

I am a person who likes my home life stable, happy and free of drama. I work hard to keep things that way. Growing up surrounded by alcoholics, criminals and sociopaths, I swore that I would never let my family life be tainted by that kind of chaos, once it was my turn. That decision had absolutely no magic 'drama-averting' effect on my life subsequently, but it did mean that, like any other vermin, problems were hunted down and exterminated as they arose, instead of being left to fester and multiply. I loved my family, I sacrificed, I made good decisions, blah blah blah blah fucking blah.

I don't know if it's just American culture or just me or what, but once you have achieved the home and family thing, the societal models kind of peter out. So I assumed,like a doofus, that things must pretty much just peter out on the inter-familial stress front since there was apparently nothing left to report. I figured the kids moved out, you got wrinkly, you went to Vegas a lot, then had a hip replacement and eventually died.

There are times over the past year that I wished I'd never made the decision to have a family. That's a new one for me. I went into the endeavor thinking that if I did everything 'right' that things would, you know, turn out right. Which in retrospect was astonishingly naive of me. Had I been raising feeder mice perhaps that expectation might have proven closer to the mark; feeder mice don't cause a lot of drama and either way you end up feeding them to anacondas. During the course of this past year, there were people in my life that I would have liked to have fed to anacondas. I would be surrounded by obese anacondas right now. Obese, non-dramatic anacondas.

Half the problem is me. I might be pushing 50 hard but the rotten kid who used to vandalize things at random and get into fights is still very much alive and well here. I should be mature enough by now to be able to keep my shit together; to be able to pull back, to separate from things that are no longer under my control. Am I? I am not. I want to leap onto things that are no longer under my control and rend them into bleeding shreds, kind of like what happens to stray teenagers out for a casual walk through the woods around Forks, Washington on a moonless night, only everyone involved would be wearing a shirt. The only difference between me now and then is that back then I used to get off on being enraged. Now it just makes me feel like shit.

So are we in counselling? You bet your little red wagon. This rotten kid does not give up. Ever. Resistance is fucking FUTILE.
Posted by FirstNations at 11:55 AM 18 comments: Links to this post