I can't think of another actor with as interesting a career trajectory as Robert Patrick, but then it's early too. For some reason, someone early on decided that Mr. Patrick had a 'science fiction' face. 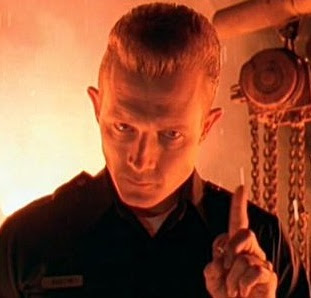 ...this guy here. Robert Patrick. you know exactly who i mean.
See, that's not a conclusion I would have made. As one reviewer pointed out back in 1984, 'he doesn't look particularly creepy or villainous; he looks more like a really mean waiter'.* And in his younger years, he resembled nothing so much as one of those rough trade boys Armani used to pull off the boulevard and stick a suit on. Which was niiiiiiiiiiiiiiiiiiiice.

Suddenly he turns up in one of the best, quirkiest science fiction screamers of the last 20 years; The Faculty.** If you haven't seen it; do so...it's that rarity, a well written, well acted scifi. (I don't even remember what the space monster looked like, but it could shoot out disgusting babies that would tunnel into your skin. Which is rad.)

Robert Patrick plays the coach of the football team. At first glance this seems like a miscast. Every high school football coach I've ever seen was fat, middle aged, bitter and drank heavily, screamed often and had delusions of past glory. Patrick, however, captured the sneering, macho, 'Head Thug' attitude perfectly. And when he goes over....oh my. Oh gracious me.

Next he crops up in That Which May Not Be Named.

...i hate even looking at the cover ew ew ew ew ew
Here he doesn't play much of a role, but he gets to add another well done, memorable scifi to his credits, and look cute in a beard. Aaaaaaand she skips over this quickly......

And then we come to Terminator 2.
I had no idea prior to this movie that a medium sized man of average looks could generate this much menace simply with an expression. Add that to the fact that he's this fucking insane evil robot that can turn into shit and grow swords out of the end of his arms and kill the fuck out of you and ruin your WHOLE day....man, everyone talked about him on the way out of the theater. "Who was that guy who played the cop? You know....'Saaaaaaaay....that's a nice bike' that guy. The melty robot guy. God he was cool!"

Next we see him pop up in 'The X Files'. And he does a creditable job here; he's vivid enough to hold his own against the glorious Dana Scully, but he was merely placeholding for Fox Mulder and everyone knew that. Which was sad; I was getting kind of sick of Mulders' weak chin and whiny problems. Mr. Patrick would have been a dynamic replacement-but of course then Dukovney returned the next season. Still, another groundbreaking, memorable scifi gets added to Bob's credits.

The next time I saw him I was sitting in the theatre next to my buddy Coon Dog watching Walk the Line. I'll be damned if Bob doesn't crop up playing Johnny Cash's hateful white-trash father. And once again, vivid enough to stand out, but this time so submerged in his characterization you have to stay and watch the credits just to win the argument 'no that is him!' And I did.

You go through Robert Patricks' filmography (courtesy of IMDb) and you find more of the same....uniform types in action-scifi contexts. One odd foray into wrestling, which we will ignore. He also does some voiceover work, and again the projects are a cut above average...among them Batman Beyond, Avatar: The Last Airbender 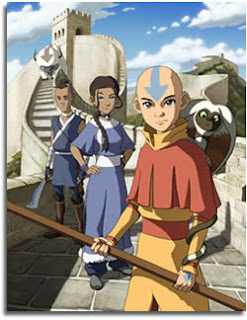 ...an excellent kids show. of COURSE i got addicted.
and Race Bannon in the brief-lived New Adventures of Johnny Quest (which kicked ass just as much as the original one. More actually.)

Autopsy is Mr. Patricks' latest project. I seem to recall it's having been released for a short time already back around Christmas of last year (because nothing says 'I love Baby Jesus' like watching a guy run a drill into some chicks head while she screams and brain matter shoots out of the hole.) but then Seattle's a test market. A lot of things open here briefly; and those that don't fly here never see the light of day again. Of course, if it is re-released I will not be buying a ticket, because a. I have to ingest a backhoe full of tranquilizers simply to get my teeth worked on. My definition of entertainment doesn't include a medical setting. b. Robert Patrick holding a fucking scalpel? With hospital syringe restraints not quite deceased eyeballs infected with parts, stomach contents, bleeding congealed lymph with incision maggots, and matter, with eyeballs? Nooooooo, Paco. Of course I'll rent it; what I mean to say is there ain't no way I'm going to a theatre to see this IN A CROWD OF STRANGERS? Am I stupid?
Just think of the kind of person a movie like this attracts.

*Either Siskel or Ebert; one of them.

** Frodo (Elija Wood, you know) was in The Faculty too, doing an excellent job and suffering beneath several layers of concealer; puberty was not treating him well at the time. Also a young man I've always suspected of being Leonard Nimoy's son. Kid had some wicked yeshiva smoulder going on. If I'd have gone to that high school, that's the guy I would have been blowi
hanging around with.
Posted by FirstNations at 8:46 AM 14 comments: Links to this post 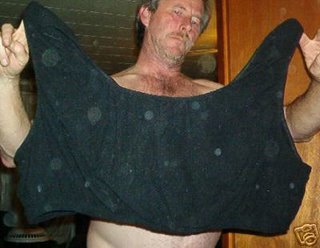 This image was pulled from Ebay one year ago and shows us a man in the act of exhibiting one of my bras for public inspection.

Actually no. But I think he may have just removed it. And his pants too for some odd reason. Perhaps the weather is a tad sultry where he is. (We will cling to this assumption like barnacles to a rock anyway.)

Now he could have upped the ante by describing all the little floaty spots you can see drifting around as 'orbs' and by claiming that this bra is haunted by spirits, phantoms, ghosts, boogies, spectres, Marie Antoinette, Don Knotts and Christmas Past. But no. I quote from the sellers' description: "Sorry about the spotty picture".

Whatever else he may have (we refuse to speculate) this hairy, naked guy selling a bra has INTEGRITY. 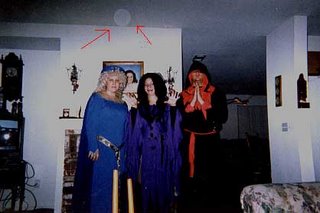 "See! Our superior spookiness has attracted a powerful phantom ally! You cannot defeat our spooky fu!!!"

This photo was posted on a ghost site. We are helpfully provided with two red arrows which point to the terrifying circular anomaly hovering above Bad Devine and Premenstrual Woman (apparently Scary Bathrobe doesn't rate supernatural hoverage.)

Now, what I find most disturbing about this picture is that there appears to be a great weight pressing down on their house which is bending the wall over on the right there like a banana. I think that they missed the REAL picture. I think while they were busy immortalizing their Dungeons and Dragons personna a BIG HONKIN UFO LANDED ON THE ROOF. And what would have totally kicked ass bigtime is, if what happened next is that they all started melting and smoking and getting big gross blisters from radioactivity and then the alien spacecrafts landing gantry thingies came spearing down through the popcorn ceiling there and skewered our trio like three badly costumed Ball Park Franks.
Now THAT would have been a cool picture.

I used to play around with hobby photography and darkroom stuff. This type of thing just makes me rabid. Ladies and gentlemen, its not a ghost. It's crud on the lens.

Now maybe Naked Guy spilled the urn containing Aunt Rita and didn't get all of her out of the carpet. Or maybe he lives atop an Ancient Indian Burial Ground. Lord knows, America teems with these; we have to fly our deceased around in airplanes because the ground is so full of dead Indians. In any event, even if what we are seeing here is particulate human, it is still DUST. And God bless him, Bra Dude may be naked, he may have bad paneling, and he may even be kinda icky when everything is said and done, but the man knows the difference between shit that doesn't exist and a dirty lens.


with a tip o' the hat to frobisher, who wondered why there were not any pictures on my blog. well, why not indeed?
Posted by FirstNations at 6:15 PM 24 comments: Links to this post

He is not only a good man and a smart one, he is just as wild as his mother was/is. He is a family man, he is handsome, and he knows his USDA zone. Ladies and gentlemen, this is a happy ending not even Frank Capra would have touched. it is BEYOND HAPPY. he is AMAZING.
he looks like me.

I promise i'll post up-or try to-whatever pictures i get permission to post. and that there'll be a better description of the proceedings (mostly us bragging about the quality of our soil and talking about our mispent yoooths.) I gotta go. I love you all, my darlings. You are wonderful, twisted people, and being acquainted with you has made my life better (and substantially weirder).

Now go party amongst yourselves! Bring on the federally controlled substances and go take over a small rural town! ONWAAAAAAAAAAAAAAAAAAAAAAAAARD!!!!!!!!
Posted by FirstNations at 9:14 AM 24 comments: Links to this post