I have too many collections.

The only collection I have displayed in its entirety is the pop bottle collection. The rest are in storage, either in part (eggs, display pottery, animal heads) or in whole (all the rest of the stuff I haven't mentioned.)

My husband got me started collecting purely by chance, way back in 1986, when I mentioned that I needed a measuring cup for the kitchen. He brought me home a depression-era glass mug-style cup. "Aw," I thought, "how nice."

A need for an eggbeater (still in use) brought a 1942 Foley with a green handle into the house. Similarly, when our coffeemaker tanked, we picked up a 1935 Pyrex glass percolator (still have two of them, guts included.) Of course, by now we were both hooked. At one point I had every single item in this collectors catalogue:

(...well shit, I sold it and I don't recall the name. Had to get temptation completely out of my path. Anyway, it was a pretty comprehensive book.)

In the meantime I had branched out into collecting antique working kitchen appliances, Bakelite, vintage crocheted hot mats, vintage Fire King and Pyrex (curse you Martha Stewart for making latter so desirable that it got priced out of my reach, you bitch!) and I had the Biker halfway talked into doing an entire 1940's kitchen.

Because I was working in rental properties I had my choice of any style of vintage appliance or accoutrement I wanted just for the asking. And they ALL WORKED. Condenser-top refrigerators, gas ranges, you name it- anything my demented little heart desired. Wringer washers? Check! Enamel double-sink with attached drainer? Yup. Light fixtures, fans, hardware, counters, trim....fricken' towel bars, even. LIGHT SWITCHES.

Bear in mind that at the time, we lived in a MOBILE HOME.

I finally woke up one day right before my daughter was going to have a birthday party and looked around at a kitchen that was almost entirely encrusted in vintage kitchen tools and asked myself "Self, why are you nuts?" I sold it all. Well fine, most of it. At least didn't lose money, but still. The habit remains, and I still find myself looking without even meaning to.

Same with the pottery. I found a lovely ikebana piece and it fit so nicely in with my decor. Then I found another, and it complimented the first one, and it was only .10 so how could I NOT buy it, right? And so on, and so on, and....yeah.

The dead animal parts collection is just strange on a couple of different levels. Once again, my husband started it. He presented me with a deer skull with antlers intact, and I displayed it, and then one of his buddies brought me a badger skull, and another guy brought me a coyote jawbone, then my daughter found an entire coyote skull...a crow in a tree dropped a squirrel skull right at my feet one day while I was gardening....the neighbors cat drug a rabbit into my shed and the bugs did the rest. I figure when the Universe wants you to collect something, you'd better heed it.

The problem is, I live in a small house. I really don't mean to accumulate all this crap either; its just once you develop an 'eye' for something, you see it everywhere. Like when you buy a certain make of car and suddenly it seems like the entire world owns the same one. And if you're me and you have the scrounge-bargain gene, you see it everywhere, for DIRT FRICKEN' CHEAP.
Whats a little Muk to do?

...Get buried in crap like the goddam DiAmato brothers if she doesn't watch out.

Anyway, I am seriously thinking about selling the mid-century modern pottery. Here's some pictures. You can enlarge them and enjoy the dust and smudges! The only one with any kind of a flaw is the tall white vase, and it has a chip on the base. Which you can't see in these pictures. So, yeah. 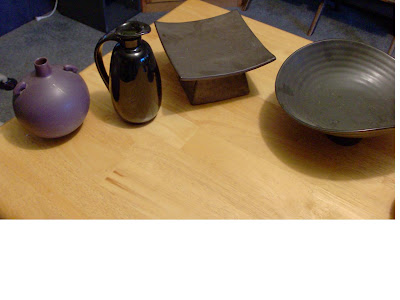 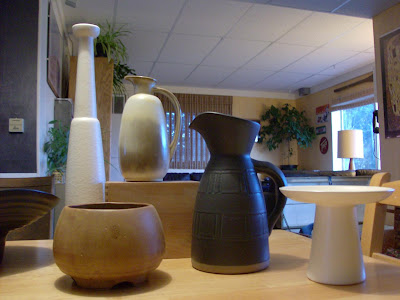 Anyone interested? I've got some sweet stuff. Gimme a dingle.
Posted by FirstNations at 8:21 AM 24 comments: Links to this post

Visually, The Watchmen ranks right at the top, with Dark Crystal. 300 runs a distant second. It is photographically true to the artists work. It reaches further by being absolutely, painstakingly true to the original story and writing style as well. This is no loose adaptation, and furthermore it works exactly because of these things. The two-story scale of the theatre version can barely contain it.


I'm pretty inured to screen violence, yet parts of this had me absolutely revulsed. It's not the graphic gore-which there is in plenty-it's that its not treated incidentally. You are meant to pay attention to it. Its meant to be ugly and squalid and disgusting and petty and cruel. And it is.

This movie is a lot of things...visually wonderful, exciting, intense-but it is not a 'fun' film. I thought it was almost as emotionally exhausting as Das Boot was. ( and at 2 hrs and some-odd minutes running time your ass ends up almost as numb afterwards.) This film makes a very caustic, mature statement about idealism vs. reality. It's R rated for a reason. Another large, blue, uncircumcized reason is waving around randomly on Dr. Manhattan for most of the movie. And then theres some hot costumed superhero sex too. So its not exactly a total bummer.

Go see it NOW. And go see it while it's still playing on the big screen. It's worth whatever you have to pay. It really is that good.
Posted by FirstNations at 8:30 AM 15 comments: Links to this post