Would you like to know why I have finally decided, after some serious deliberation I might add- to cast my vote for Barack Obama? 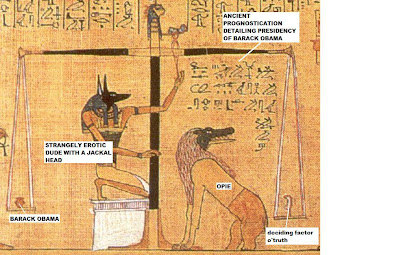 Here's the feather that balanced the scale: 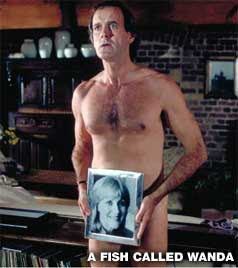 ..Mr. Cleese cradles his picture of Martha Stewart protectively, daring the world to pry it from his grasp
As long as I'm going to be participating in a ersatz political exercise like the American presidential election I figure I might as well back the intelligent choice. (Using the word 'choice' in this context with an almost unbearable weight of irony attached.)

Yesterday while I was out buying denture adhesive for my father-inlaw I saw the most amazing MULLET I have ever, ever seen. I think it deserves its own unique classification, although I'll be damnded if I can think of a name for it. In fact I can't even think of how to describe it completely without pictures, and of course I didn't have my camera. I'll have to resort to 'Paint' here: 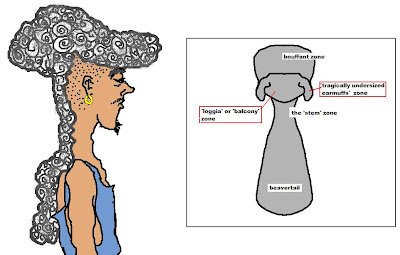 The inset frames a representation of the hair as it would look without a tweaker standing underneath it.

As you can see if you bothered to click it to make it bigger, this hairstyle was divided into distinct 'zones'. I believe this was the result of two combined factors: the highly original cut, and partly because the mans hair was just...huge! Tons of huge! Tight and loopy like black astrakhan, which is the peelings off an unborn baby sheep.

Guy was pretty obviously street to the core. You probably can't accuse him of laziness...it's got to be difficult to hold down a job when you have to spend so much of your time whapping about at random with a shitty stick just to keep that 'poon at bay.

Really, though, what would you call it? You've got some undershave going on, then an abrupt detour into DeBarge - Milli-Vanilli country, some fade, a distinct disco vibe, a certain anarchic whiff of punk, another tangent we'll name 'Cyndi Lauper meets Raymond Loewy'...and of course the whole 'West Virginia Waterfall' theme overall.

It plumb fuckin' eludes me. Any suggestions?
Posted by FirstNations at 8:17 AM 19 comments: Links to this post

Do I look smoking hot?
Do I look sly as fuck?
Is my shakin' fu unbeatable as hell in this hat?

The moment I put this hat on my head my sexxxay skyrocked into the infinite. Men were giving me that 'Sup, momma?' chin thing. Yes they were! And I was walking alongside my husband!!! High school boys were checking this out. I'm 48! I busted one kid, caught his eye and said 'Oh yes. M-I-L-F, honey" and he BLUSHED. (My husband had a dip in and nearly snorked it laughing.)

Honestly, ladies, do NOT underestimate the powers of the black trilby hat. Honey to the bees, my darlings. Honey.

Yes folks it's a SMUTTASTIC SMUT-O-RAMA of SMUT, SMUT and more SUPER SMUTALICIOUS X-CITEMENT! It's a nonstop swingin' spree of KREAMY KITTENS and red-hot STUDS hungry for aXXXion! God how I love that sleazy 70's Russ Myers copy lingo! I could go on like that for PARAGRAPHS AND PARAGRAPHS AND PARAGRAPHS AT A TIME! And you want me to! Admit it! ADMIT IT TO GRANDMA! YOU WANT THE

ok fine.
Posted by FirstNations at 10:28 AM 25 comments: Links to this post

MIGHT ANYONE HAPPEN TO KNOW WHAT THE BAG LIMIT ON HIPPIE IS RIGHT OFFHAND?

A short while back while I was outside gardening with my son a vegetarian-looking fellow floated past and said 'Hey, you better watch out or someone might come and steal those poppy pods from you."

Just stepped right into the middle of the bed and tore the plants out of the ground when the pods wouldn't snap off. 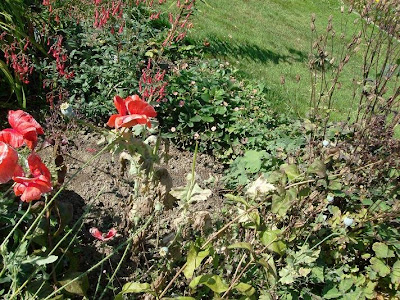 And here's where he knocked the dirt off. Wouldn't want to carry that around. 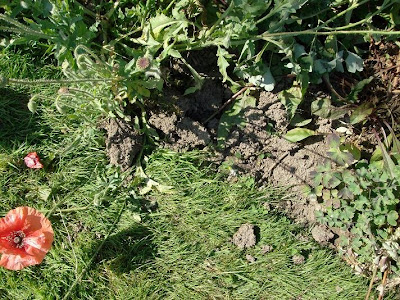 Aw, but look! He paid! He left some money on the bottom step of my front porch! 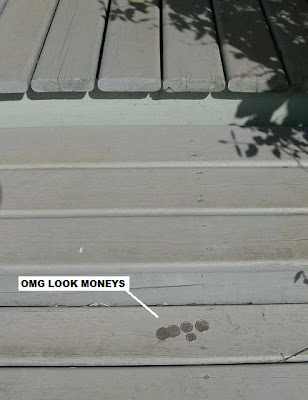 I left him something, too.

Guess what, Mr. Hippie man? You missed a couple! That's right, you didn't quite clean me out, you dickless bakehead!

Gosh I sure hope you come back tonight.

Yes, do.
Posted by FirstNations at 4:02 PM 20 comments: Links to this post

I Want To Believe

We have a stack of early, early biker magazines that we circulate through the bathroom reading rack every summer. 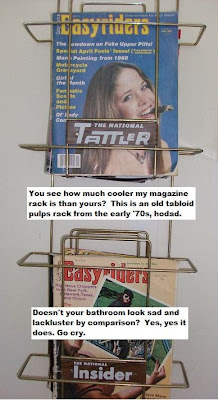 People experiencing the afteraffects of our barbecue have their spirits lifted and their attention distracted by the bright colors... and all the pictures of extra-fluffy 70's snatchola sprinkled throughout the pages. 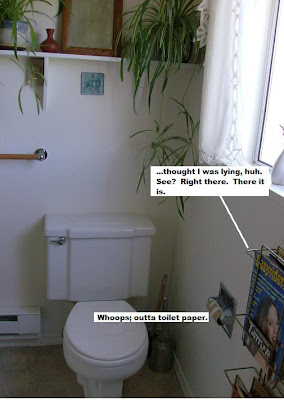 Old Easyriders, and other biker oriented rags like Supercycle and Outlaw Biker, are always good for a hoot. The goofy snapshot they provide of the subculture during that era is entertaining as hell. Easyriders magazine is where I first indulged what blossomed into my present shameful obsession with crap fiction and 'outsider' writing, in fact...although in the case of Easyriders, 'outsider' hardly begins to describes it. Aside from the rare article, on the main Easyriders constituted an excellent example of what public-funded education turned out around the middle of the 20th century.

Not only is the writing...charming, the advertisements themselves make up a whole subgenre of stinky bad potty toilet that just can't be conveyed using mere words. 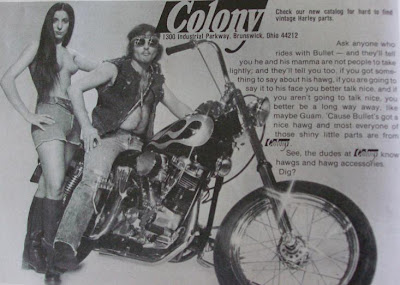 Yes, I was glad I was sitting down when I ran into this one.

This comes from ish #58, published in April of 1978. As you can see, while the rest of the nation supped from the lip of purulence that was disco*, certain sectors of the American public had only just entered the 1960's and were still experiencing some difficulties adjusting to the whole 'groovy' thing.

My entire being wants desperately to believe that the girl with the a-cup roo guards there is a very young, pre-op Cher.

Yes I know Cher was older than that in '78 geeze Louise. You ever heard of negatives? Remember them? Ok then. Keep up.

Seriously. Take away the heavy false eyelashes and the nose job, and you have a young lady that looks suspiciously like the Armenian titwillow. I am dead serious. If any of you are rabid Cher fans, I want you to take a long and serious look at her very earliest, earliest work, the stuff from back when she was a tender teenlet doing JC Penny's ads and shit like that. Yes, I know this ad flogs a company in the Midwest. That really means nothing. Back before Svenga I mean Sonny took over her career she could have done a shoot and signed one of the standard rip-off models releases of the day; and her image could just as easily have ended up on a can of Japanese underpants as anyplace else, depending on who bought it from the photographer.


I don't know who the mook sucking in his cheeks is though. 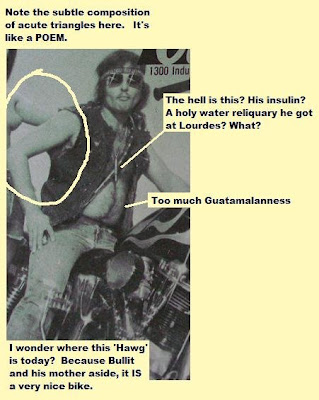 He could have used a shop vac and it still wouldn't have distracted anyone from the fact that he was a good four months along there. Look at that chub chub. Don't you just want to blow farts all over him until he pees?

God it would be SO rad if it were the mayor of Palm Springs, wouldn't it??

Do read the copy. It's happening. 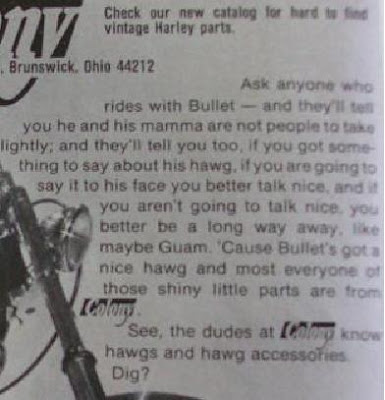 I am totally using the 'Guam' threat. Seriously. Fuck with me, man, you BETTER be in Guam. Yeah thats right.

This is the whole page. Yeah, that's a windjammer! Remember power hitters and and cold tokers and shit like that? 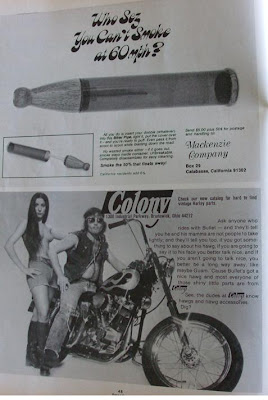 Item: a new television series coming out about bikers called 'Sons of Anarchy' 'Nuff said.
Posted by FirstNations at 7:33 AM 10 comments: Links to this post