I'd have to nominate Campbells' Soup as the biggest negative influence on the average middle-aged Americans' diet. It was a soup, of course; although unless it was Chicken Noodle I am hard pressed to remember it being served as such.  More often, Campbell's Soup was used as a sauce, an extender, a binder... 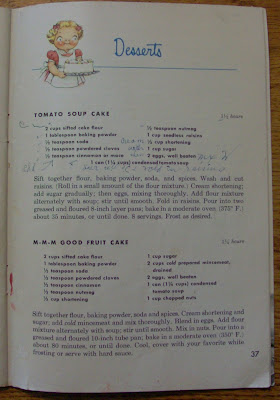 ....and apparently as a cake ingredient.

In my house, as I suspect it was in many other homes, it was also used a culinary band-aid.  Don't throw away unrecognizably charred horrifyingly over boiled perfectly good food! Just blop a log of Campbells' Cream of Something on top and bake the sapsucker! And don't forget to stick some cheese, pearl onions, tater tots, Corn Chex, cornflakes, fried onions-in-the-can, Doritos, Fritos, Ritz crackers, soda crackers, coconut flakes, walnut chunks, whipped cream, miniature marshmallows or barbecue motherfucking potato chips on top particularly if what's underneath is extra disgusting.*   Take it from one who knows...you could hide a lot of evil under a thick coating of Campbell's.  Or a locomotive, or your mother.

There was no escaping it! The stuff was everywhere! Any family or group event you attended - weddings, funerals, picnics, reunions, potluck dinners and birthdays - half the food on the table would have been made using Campbell's soup.

And so, in the spirit of sharing the dark side of our American culinary heritage, I'd like to present this recipe to posterity:

AUNT LILLIANS' BISQUICK, CAMPBELL'S AND VELVEETA PIZZA
... My cousins used to tear this shit up like wild pigs.

CRUST:
-2 cups Bisquick
-1/2 cup water...knead for 1 minute then roll out and shape into circle 1/4 inch thick on pan. Pinch dough around edges to form slight rim.
TOPPING:
-1 can Campbell's Tomato soup, undiluted, shlooped out of can directly onto raw dough and spread with a rubber spatula to cover thinly
-1 lb hamburger (crowd pan and boil until grey. DO NOT DRAIN.)
-Velveeta cheese, sliced, to cover every single square inch
-1 can black olives, sliced in half
Bake at 425 for 30 minutes.

The thing about this recipe is that it would probably be marginally edible if the cheese was anything but Velveeta.

Velveeta does not melt well when baked.  What it does, is burn.  And at this temperature, it burns rather spectacularly, complete with flames, black smoke and little specks of ash floating around the kitchen; and this is exactly what happened every single time my Aunt Lillian served it.   The smell was exactly what you'd expect any milk product in flames to smell like (i.e a sweaty t-shirt covered in baby formula barf and then used to clean a wood stove.)  In presentation this dish resembled a well-used manhole cover, the hamburger sticking up in craggy lumps beneath a fragile vitreous glaze of burnt processed cheese-food, the olives laid out all shiny and wizened up on top of the thing like little black Volkswagens caught out by an asteroid strike.

I trawled the back alleys of my cookbook collection, and here's the closest printed thing I could find right offhand to the above: 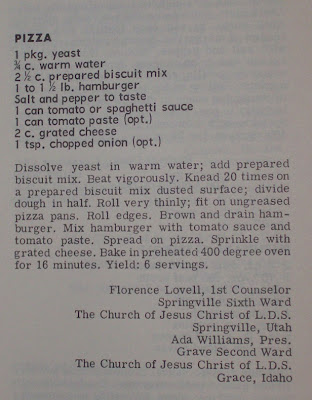 You see? I'm not making this shit up.

Neither am I making this up: 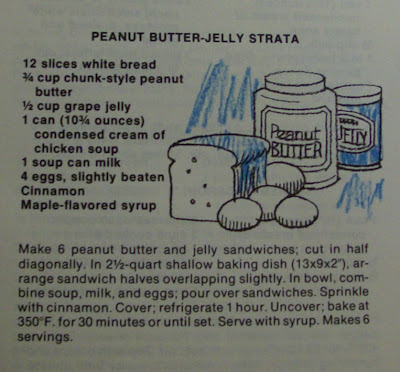 Campbell's Inc. clearly gave less than a lukewarm, runny shit about what went between the covers as long as there was something there besides clip art.  Now you market this shit to newlywed girls with little to no clue, and put it on the table in front of a public who all smoked like fiends anyway, who's going to know any different, right?

Campbell's is responsible for popularizing such staples of the mid-century table as:

Green bean casserole, from the kitchen of someone who likes food, is really delicious and something to look forward to. This one will give you something that looks and smells like the aftermath of a nuclear incident nearby a tiny alien logging operation.

I don't remember anybody ever making this with Cream of Chicken soup, probably because that would have been marginally tasty. No, they always made it with gross-ass Cream of Mushroom because vegetables are supposed to be obligatory and disgusting, not delicious.

The Campbell's version of stuffed peppers was something I used to dread... a slimy, wrinkled, parboiled punishment on a plate. You stuck a fork in them and they burst, and this liquid that tasted like over-boiled green beans ran out and filled up your dish as the pepper deflated and laid there  like a gross saggy wrinkled Jolly Green Giant scrotum. 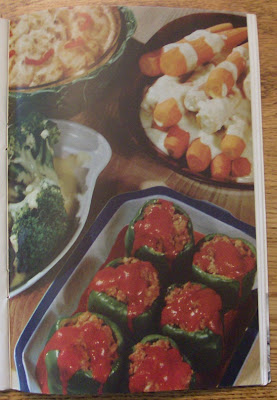 Looks pretty good, right?  Until you look closer.  That pan has never seen the inside of an oven.  Those peppers are raw. That's right. This is fucking staged.  And  you know why; because they took the first pan out of the oven, recoiled in horror, and called in a professional.  You make this dish according to their recipe and the peppers come out all pale and squatty and freaky, the tomato soup on top burns black because it's full of corn syrup.  Remember?

And what about these taste temptations?

...this wins, hands down, as the defining gross childhood dish of the 20th century.


I have no idea why this even exists as a recipe. But this is the actual Ur-tuna casserole recipe, right here. Lucky you!

Everyones' parents LOVED this shit. Absolutely loved it.  I have no idea why. Not only did it look disgusting and taste disgusting, it smelled like a taxicab seat. And there's fucking PEAS floating around in it.


And vying for number one with 'Pressure-Cooked Anything' on my childhood list of culinary horror: 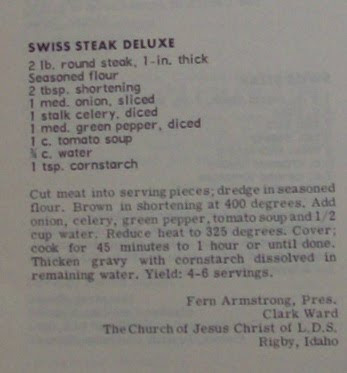 This isn't out of the Campbell's cookbook.  It's out of this one again: 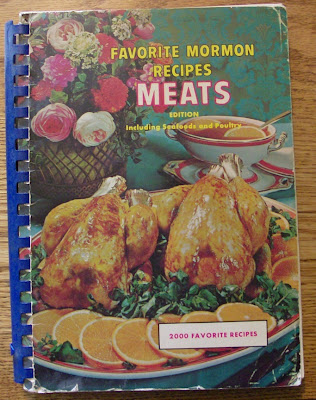 ...published by people who really, really did not like Mormons, although that's just my opinion.

This recipe is absolutely the most horrible thing that's ever been done to a piece of beef in the history of food.  It's absolutely revolting.  Our house version was, you took the steak and dumped the seasoned flour all over it and then beat it to death with a toothed mallet for about 20 minutes, turning it over and scraping all the frag and flour off the board and dumping it back on and whamming it in until the meat was pale gluey Easter pink and thin and holey enough to read a newspaper through; and so huge you could use it as a bathmat.  Then you just flopped in in the pan with everything else and let it boil for an hour while you stood over the stove with a Pall Mall dangling from your lips and poked it with a fork.

So remember, middle-aged America, the next time anyone tries to face you up about some of your food horror stories, you just show them this.  And don't forget to tell them...it gets worse.
Much, much worse.

Posted by FirstNations at 1:32 PM No comments: Links to this post