I have a really, really sensitive nose, at least when my sense of smell happens to be working. Most of the time it isn't. (Weirdly, this effects my memory.) When it is, I rival a pedigreed trufflehound. I can tell if something I'm cooking has been salted or not. I can tell where any given cloakroom is by the smell of all that concentrated detergent and hairspray and smoke and aftershave. I can smell peoples' individual scents before they enter a room. And that's creepy. I don't like it a bit, particularly after discovering the fact that smell is particulate. Bad enough I can identify you in complete darkness, but to know that I'm huffing actual matter shed by God only knows what...regions... No.

Still, its a cross I bear. Without warning. This makes it worse, like a sneak attack. One minute I'll be wandering around in an absentminded fog and breathing will be the involuntary, unconscious activity that it's meant to be....another moment and suddenly I WILL KNOW what brand of douche the woman on the escalator ahead of me uses. Or if she...does. Yeah.
No really, it's honestly that bad. Ignorance really is bliss, kids.

If I'm in a public place and my nose suddenly decides to work I instinctively switch to breathing through my mouth, which is always attractive. I don't know why this makes it any better; I'm still sucking in funk chunks. I guess not being instantly aware of their probable source is a comfort. Huffing ass frag is one thing... KNOWING it's ass frag is another thing entirely.
An assy thing.

Assy things were plentiful in the hospitality trade, as you might imagine. I dreaded Monday mornings for just this reason. I would walk in to a recently vacated room, a room that had been closed tight for at least two solid days while the guests drank, smoked and performed carnal acts of slappity squittiness on each other. Sometimes it was all I could do not to give notice. Motel rooms are typically tiny and stuffy to begin with. That compounded with the rank, porklike human smell of skin and hair and sweat, the body-temperature humidity, knowing you were inhaling other peoples' exhale, stirring up their buttflakes and dick particles when you stripped the bed, shuffling up clouds of foot frag as you vaccuumed...it was not propriate. Or beautiful. At all. You tried not to think about it.
Particularly because you still had the bathroom left to do.
__________________________________


I used to do a lot of amyl nitrate during vocational training class. Me and my buddy would roll in already baked, and then run back to the darkroom and take a couple rips just to get into a 'graphic arts' frame of mind. We'd sneet a few more for the road during break. Beside giving you an excellent sweeping headrush, amyl, and the combination of various noxious darkroom chemicals, would effectively kill your sense of smell for about 15-30 minutes. Once we discovered that our intake doubled, since we used it pre-emptively for those times when we knew we'd have to deal with Meg, our instructor.

I have no idea what kind of medical condition this woman had, but her breath smelled like boiling cat urine. The most ammoniac, venomous piss stench imaginable, like a bus shelter full of winos. The fact that it was definitely her breath made it even more disturbing. It made you wonder what she....ate.

Her office was a small glassed - in cubicle and it had absorbed that pee-breath smell deep into its very subatomic structure. Opening the door was like taking the lid off a diaper hamper. That held true whether she was in there or not.

During class she'd come around and appraise everyone's work on the light table. The atmosphere back in that area was already pretty thick; light tables, adhesives and teenagers give off a lot of heat. Every time she'd lean in to speak to me, my eyes would literally begin to water and sting. It was beyond belief! You could taste it! You could practically see it shimmering like paint thinner fumes, scorching your sinuses, bleaching all the color out of your eyebrows. It was just horrifying.

Me and my buddy went through an entire 8 gram perfume bottle of amyl during that quarter. That in combination with the chemical darkroom stew we were already breathing probably destroyed a whole lot of vital brain cells, which may go a long way toward explaining why I am the way I am now. Or not.
Posted by FirstNations at 8:03 PM 20 comments: Links to this post

We've hit that stretch of 'false spring' we get up in these parts. Certain signs: bulbs breaking dormancy with frostbitten noses, eagles sitting their nests, and FirstNations ass-up next to the road pitching and bitching. I nabbed back some shrubs and trees, tore out a bunch of old dead stems and seedheads, and walked around shaking my head and squinting at things. Still, it COUNTS. I made a mess. It's gardening.

I'm going to finish up all my late winter pruning, stack that up, and then get into some serious compost turning action, weather permitting. I cannot wait to stick a pitchfork into that stuff and see what happened over winter. I had an amazing amount of breakdown this season, about 2/3 less mass than what I started out with. Usually it's about 1/2. I think its because of the extreme weather we've had; that, and all the visitors, like crows and ravens and raccoons and mice and hippies and whatnot.

I look forward to the first turning of the year. I really get a kick out of seeing who's been in there and the traces they've left behind...tunnels, seed caches, tiny round nests, flask-shaped hibernaculums lined with clematis fluff, and occasional mortal remains. I'm particularly curious to see if maybe I have an extra large number of angleworms in the heap because of the flooding we had during the winter.

After any spell of cold or rainy weather the compost heap will have a zone of giant freaky long angleworms, chased up out of the deep soil by the rising water table, knotted up in big tangles like spaghetti all around the edges . If I'm careful I can transfer them in handfuls without waking them up too much right into the soft soil of my raised beds and cover them over. Once they wake up they're amazingly fast, strong and agile. They go through my heavy clay soil like mining equipment and leave tunnels as big around as my index finger. These are some buff damn worms. They can beat up your angleworms. Seriously. I try not to piss them off.

Anyone else that gets uncovered has to take their chances, though. The robins always line up on the fence impatient for me to finish and watch me while I turn the heap, giving me one-eyed glares with their heads thrust forward in a grouchy manner. When I get done I watch them from the kitchen window going back and forth from the fence to the heap, flinging chunks of compost out into the yard in their greed, getting chubbier and chubbier as they feast on all the slug eggs and redworms and centipedes and potato bugs I've turned up.

This year I have to take out a couple of trees...a Bradford pear and a Leyland cypress. The Bradford is simply a nuisance. We bought it as an ornamental. It was supposed to be male. It wasn't supposed to fruit. After a few years of throwing a single pear, if that, it suddenly decided to blast out bushels and bushels of fruit like a mad thing, much to the delight of every hornet, crow and raccoon in the neighborhood. Time for you to die, Bradford pear.

The Leyland simply got away from me. And take that as a warning, kids: cupressus leylandii grows like a mad motherfucker. I had been nabbing it back pretty faithfully, keeping it low and stout, but then I left it go for a year. That was all it took. Now instead of a nice short, trim, full tree I have a tall wandy nuisance that's shading out my magnolia stellata. I have to jump on it too before it gets too big for me to handle myself, thus begging the intervention of the Yummy Biker, who does NOT belong in the garden because he makes my plants very sad. (Plus he has cooties and boy germs.) Besides, this gives me an excuse to use my chainsaw, and I'M BY GOD GOING TO USE MY CHAINSAW. 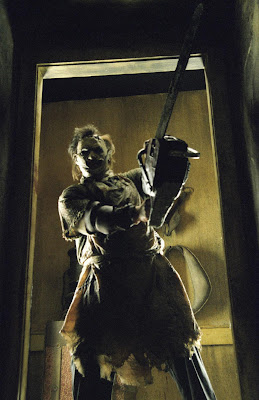 ...my chainsaw! MINE!!!!!
Seriously, can you think of a better way to bring in the new gardening season than by using loud destructive equipment to kill a perfectly healthy tree? I can't. It's gonna be awesome!
Posted by FirstNations at 4:44 PM 27 comments: Links to this post