The Biker and I visited Laughlin, Kingman and Oatman, and a little bit of Las Vegas, which was horrifying. We took pictures with our digital picture taking thing. There are batteries inside it. It is called a 'camera'. 'Camera' is Latin for 'room'. Now quit bugging me about it. The pictures show images of things we saw. Like this: 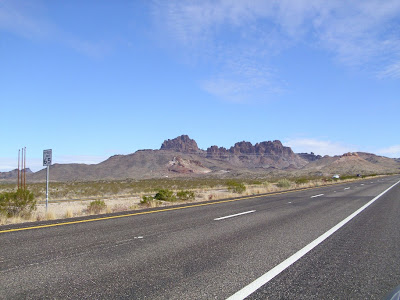 This is the road to Laughlin. Whole lotta nuffin, is what you see in Nevada, in between casinos and tiny, bleak towns filled with mobile homes and identical tan houses. Why didn't I take any pictures of Vegas? Because you can go online and see pictures of Vegas. That, and we spent only as long as it took to rent a car and return that rental car in Vegas. Fuck Vegas. I mean seriously fuck Vegas.

This was taken on the main street of Kingman. Why didn't I take any pictures of Laughlin? Laughlin is fucking ugly, is why. Laughlin consists of one main street with five or so bigass casino-hotel complexes, surrounded by identical tan houses, and desert. Fuck Laughlin. The Colorado River runs through it, and it's ok as rivers go but it's a RIVER, PEOPLE. If it were on fire, or was filled with hybrid dolphin-humans, that would be another story, but it isn't. 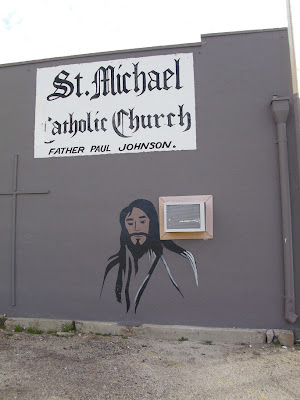 This is the side of the storefront Catholic Church (traditional) in the last picture. Remember? The one with the fat chick? That one. Jesus has an air conditioner on his shoulder. Remember back in the 80's when everyone was carrying around a bigass boombox on their shoulder? Yeah. But Jesus is a practical guy, and this is the middle of the Great Basin desert. If he wants to hear tunes he can duck into a tavern. 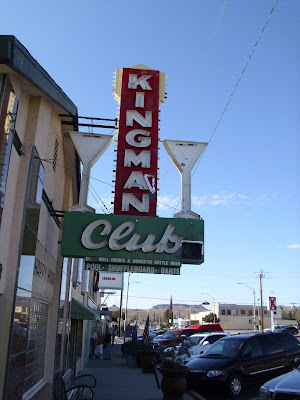 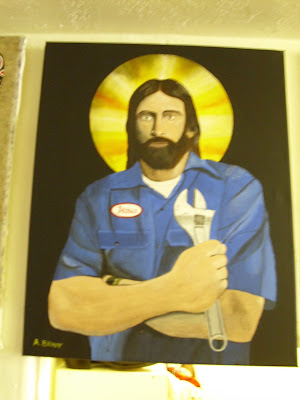 This is another painting of Jesus we saw in Kingman. Someone needs to buy this because it is cool as shit. You want it, it was in an antique shop called 'Bubbies'. The same person painted another awesome-ass painting of a Chicago Dog, and I wanted that sapsucker bad, but it cost 300.00 and there isn't a hot dog in the damn world I'm going to spend 300.00 dollars on cool or not. Fuck hot dogs. 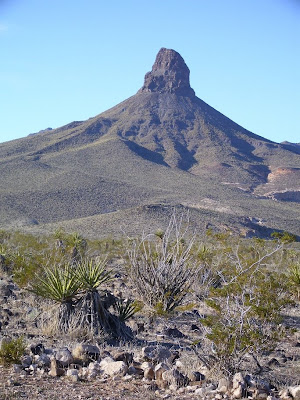 This is a random mountain just poking up out of the desert outside of Kingman. This mountain is so old it is actually CRUMBLING into dirt, just from standing out in the hot sun getting baked to shit and then freezing at night for weeks on end like it has. If you have a mountain you should think about this. You can ruin a perfectly good mountain without meaning to really easily. 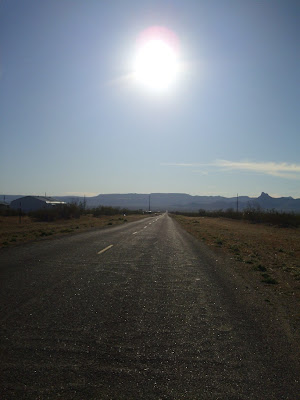 You see this here? This is the reason me and the Biker came to Nevada in the first place. This is some of the last few remaining miles of the original Route 66. We wanted to see this and travel on it ourselves. Now it's paved. It wasn't 60 years ago.

This is a ghost of what the Dust Bowl migrants faced in their desperation--20 unpaved miles across waterless, shadeless, open desert, headed straight toward the sudden dangerous grades and washouts of the jagged stone mountains in the distance. Crossed with sand-filled arroyos that the tires of the cars sank into, washes that could turn into a pit of death and erase you without warning if a flash flood occurred...caused by a rainstorm you never saw, that happened far away in the hills. The desert is still giving up the bones and belongings of these people. 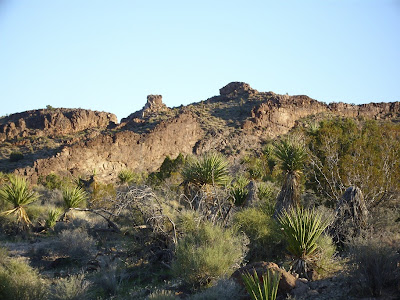 Once well into the hills the stone and sand begin to give way to amazing desert plants, cacti, mesquite brush, palo verde and spanish dagger, alien and spiny. There is no sound and no smell of water anywhere. The still air perceptably draws the moisture from your skin and your hair crackles with static.
In places the road is supported on piles of stone rubble. Once well into the mountains it shrinks down until it is barely two cars wide. The hairpin turns and switchbacks are short enough so that you can scrape your car on the stone walls of the mountain in navigating them, and the grades are dangerously steep. Some of the washes you cross are so narrow that long vehicles can get lodged tight stem and stern between the downhill and uphill. This shit is not for the fainthearted driver even today. Imagine it in a Model T. I wish I could have gotten pictures of it to illustrate what I mean, but there was literally no place to get out of the car to do so. This was taken on the only wide turnout we found. It's some plants. 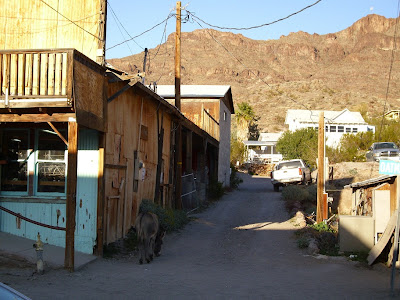 Up in the middle of these mountains you suddenly come into the little town of Oatman. Named after a Victorian era woman with a facial tattoo who was enslaved by the Paiute, in fact. (go Red Team!)

Among other inhabitants of the place are a herd of semi-tame hippie-ass donkeys that were turned loose way back when the mine up the road switched over to mechanized transport. The donkeys lie down in the middle of the road. They wander into the stores. They lick your windsheild. They eat cactus. They crap where they want. They do not give a fuck. 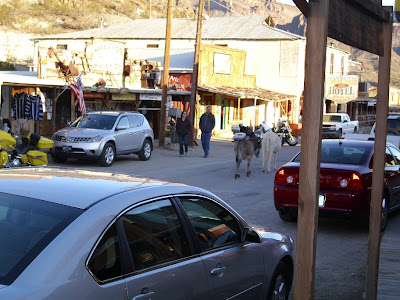 This is pretty much it for Oatman. It's in a ravine, and the town, such as it is, is perched up on the hillsides on either side of Route 66 going right through the middle. 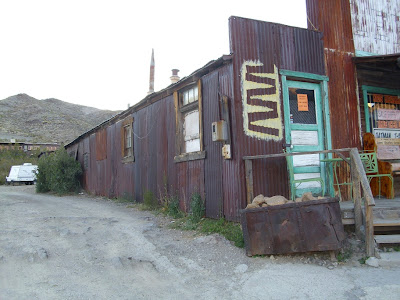 You have to look around the corners for the 'old' Oatman to peer back at you. A lot of what stands is whats been built and re-built for years out of what remained after something fell over or burnt down. Some of it still remains, though. 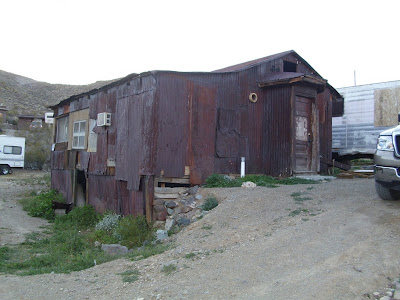 If I have to live in Nevada, I'm going to live here. I'll craft motorcycle 'windsheild wipers' out of donkey leather and sell them in the summer for beer money. Come winter, I'll just pop the air conditioner out, give it back to Jesus, unblock the stack and stick on the tin chimney, fire up the woodstove with 100$ bills, uncork the Recipe, light up a cigar and watch the snow fall in my living room. 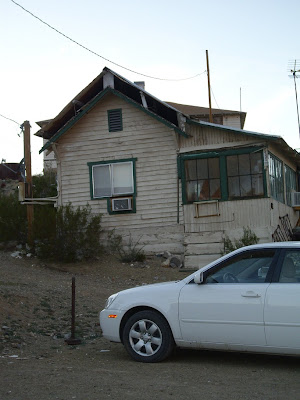 This'd be my next door neibors. The house is a cabin thats been sided and drug up to another cabin as an addition. It's built up on mesquite posts and rocks for a foundation, and the gap between the floor and the hillside closed in with shaved log slabs. The aluminum windows are salvaged, and the old shingle roof is roofed over with another roof of tin for whatever reason. 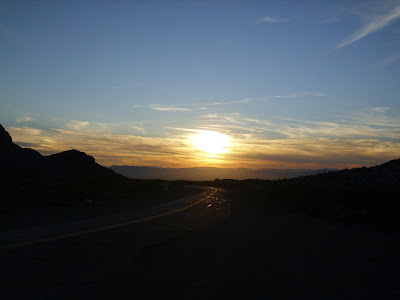 Just out of Oatman the road flattens out and becomes straighter, the grades become less nerve-wracking, and it's a long glide down into the desert along the banks of the Colorado River. This is the perfectly magic, perfectly timed sunset we saw as we rounded the last bend on Route 66. It went straight through me.

Now I have to go pee. You should probably go pee too.
Posted by FirstNations at 12:58 PM 1 comment: Links to this post