Ever spent much time around chickens?

Nobility is not one of their attributes.

If you live in these parts, it isn't 'bald eagle', it's 'ball-headed eagle'. This is not only an example of poor enunciation, but a strange meeting of vernacular and inner wisdom. Your common eagle has about as much sense as a cue ball. Shits quite a lot more than the average cue ball though. In venery terms this is called 'slicing'. What it is in reality is nine gallons of partially digested road kill ejected at high velocity. (The only other creature that produces biohazardous wastes in excess of intake and body mass aside from the human infant.) 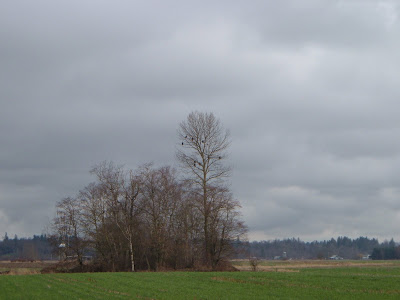 Favored eagle roosting sites are heavily coated, Jackson Pollock style, with this substance. The ground below them is...crunchy.

What eagles do, mainly, is stand around. 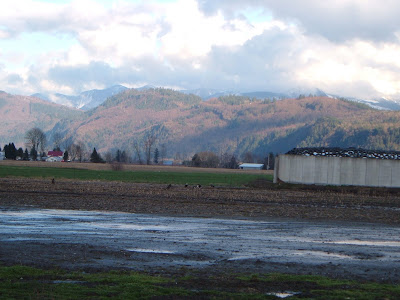 And stand some more. 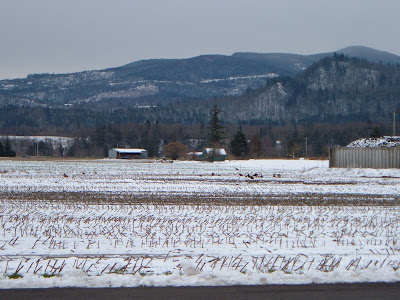 Very occasionally they have minor altercations, which vigorous event entails some flapping at one another and then one flying off a few feet.
Where they stand.

They will cooperate in breaking up kill. A family group will patiently deploy around, trudging through the mud like grumpy toddlers, tugging and twisting until everyone has a leg or a head.
After which they drag their lunch-chunk off, and stand.

It is a stirring and inspiring sight to see one of these great birds in flight.

It is somewhat less inspiring to see one with its head buried to the shoulders up a dead cow's ass, making the entire carcass shudder and jump.

This is a regrettably common sight around here, too. Farmers set down cows out next to the road so that the dairy service can haul them off for incineration. What is convenient placement for the Morgans' truck becomes a traffic- slowing sideshow for tourists.
Welcome to Sumas! Ignore the eagle backing down the side of the road pulling the intestinal tract out of that dead cow there. Nature is beautiful.

They wonder why we still have ten empty businesses on Main Street.
Posted by FirstNations at 7:07 AM 19 comments: Links to this post

This years' ABATE motorcycle swap meet was held in the substantially warmer and more civilized Exhibition Pavillion at the Monroe Fairgrounds. The bastards usually cheap out and put it in one of the unheated 'small animal' buildings, which is hardly appropriate, OR suited to March weather conditions, but I digress, y'all.

This year the clubs were out in full force! I can say with confidence that at least 75% of the people in the picture below are affiliated. That's why most of my people pictures didn't turn out; I had to be stealthy. 'One little muk : giant room full of large psychos with prison records' is not a safe muk- to-psycho ratio. 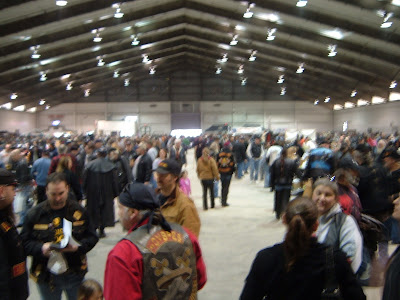 Same politics as last year...despite the colors, most of the clubs are HAngel affiliates, with the Bandidos representing out front. Nice guys individually, morons in groups.

Now I'm going to stop here and explain something.
There are bikers, there is a lifestyle.
Some bikers belong to clubs.
Most do not.

The Yummy One has been asked to prospect for several but has turned them down because his idea of individuality does not include things like hanging out in a group wearing identical clothing. We've done high school already. 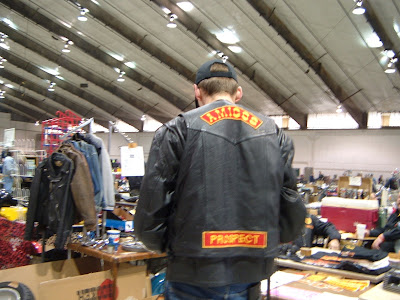 ...because freedom's what it's aaaaaaaaaall about.


Then too, there's the whole 'catch a wild animal and fuck it, beer stein full of piss' thing and, just, no.

On a whim, because we are biker assholes after all, we went around back, sauntered in through the cop entrance, past the cops, past the Banditos, and strolled around all day long. When we gate hop, we don't fuck around. (Don't start with me. It was a Red and Gold event. It doesn't count.) 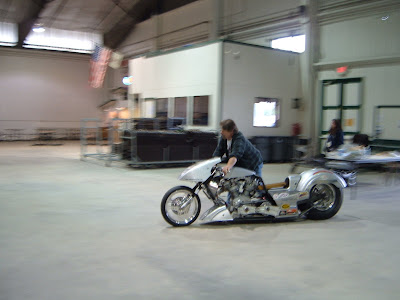 ...a little drag never hurt anyone.

Our buddy with the Ferengi-head had his usual hooch full of the usual stuff, and just to fuck with him while he was off visiting, I sat down and sold a bunch of it for him. Albert is a trip-he doesn't really need or want to sell anything. He's just there for the event, socializing away happily while people try to shove money in his face. He finds this distracting, so he avoids his booth.

I ended up with 200$ of his cash in my pocket by the time he finally came back. I handed him the money and he stood there and looked at me like he'd been hit with a brick. 'What's this for?' he said.
I pointed out all the empty space in his booth.
No clue.
I know, I know; I should have booked ass. 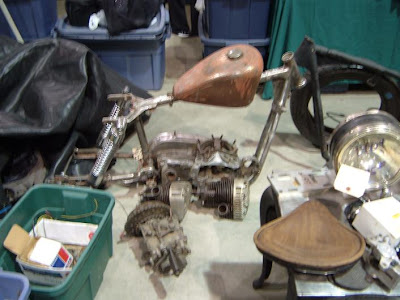 At first I thought this chick's cutoff was stupid, but then I took another look at it and realized that it was true folk art, utterly sincere. This is all beadwork, all hand done.
It knocked me out. Don't you wish you owned this? 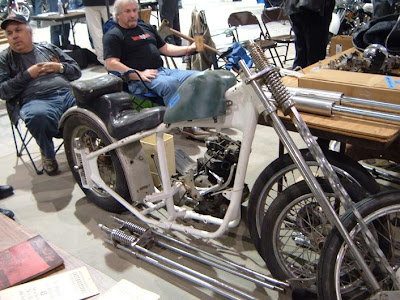 That's a 'Monster' series Ducati, kids. I just wanted to lick it all over. 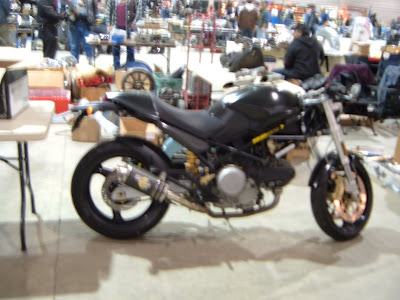 Here is a stone stock Harley Whizzer. It's a runner, too! 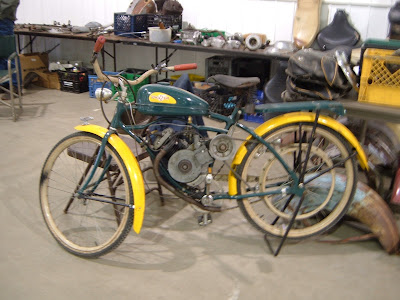 
The acoustical tiles above each throne in the ladies' room had suspicious holes poked in them, each one positioned directly over the bowls. All the way down the line, too...I checked. But hey, it was indoors. 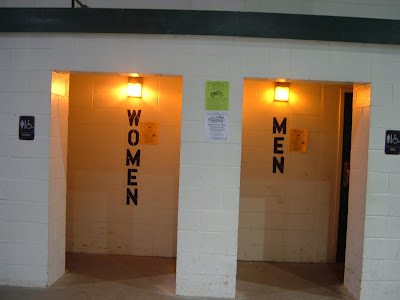 You ever looked in the mirror and asked yourself this question? 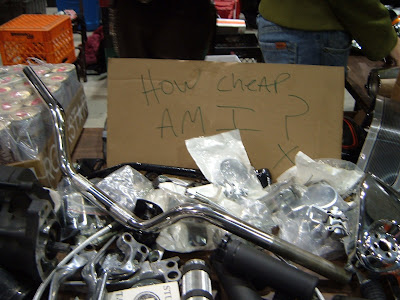 ...if you were wearing this sluttay lil' number, the answer was '49$ worth of cheap'. 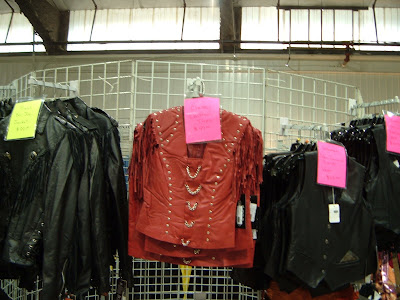 
Ha! And conservatives claim to be against abortions. 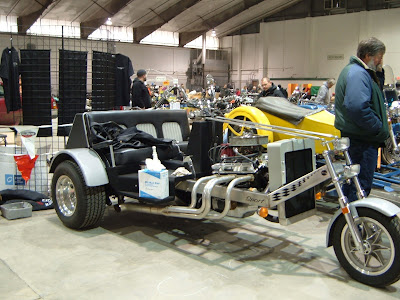 It has been a busy week and it ain't over yet, except it is. The Yummy Biker just went back to working days, after having spent last week working nights, and my pineal gland is really really upset about the whole thing.

The Stainless Steel Amazon took me to an art show at the Frye exhibit hall in Seattle!!
I was ready to take The Leaker, but The Yummy Biker insisted we take the Park Avenue, an automobile which is essentially a geriatric care facility with a big block.
Yes, my pimp hand was showing strong.
Still, it looks exactly like one of the big unmarked sedans the sherrif's office uses, which means it's really fun to pull up behind a carfull of teenagers and tailgate them for a couple of miles and watch them throwing shit out the windows and checking the mirrors. There are always compensating factors if you just take the time to look for them. 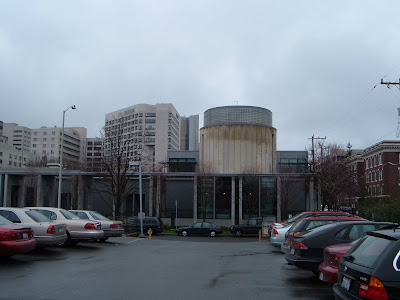 You can just tell that that is a building filled with interesting, priceless and important works of art, can't you? Unfortunately for you it was and unfortunately for you again, they were real buttheads about the whole 'no photographs' thing.
Review:
Mr. and Mrs. Art Collectors went over to France a lot. France was getting tired of Realism. Paintings where you could tell what they wuz were going for firesale prices to make room for the Impresionists. Mr. and Mrs. Art Collectors had cash. They came home with a geeeet big pile of paintings. Unfortunately, Mrs. Art Collector seems to have been the one who did the picking (while Mr. Art Collector stood in the background, signing checks and rolling his eyes one assumes). The collection on display is mainly pretty girls, pretty children, pretty saints, pretty landscapes, pretty buildings and pretty groups of farm animals.
Life sized farm animals.
Duckies, goosies, chickies, piggies, sheepies.
Horsies.
Cowsies.
Life sized.
Imagine that in your dining room: this bigass wall - cow looking at you with it's cow eyeballs while you tuck into your standing crown roast.

There were a couple of Hoch landscapes that I thought were very fine. Early Impressionist, standard fare, but rendered very poignant by contrast.

Part of the permanent collection on display, an interesting Nouveau 'evocation of lust', after Edvard Munch, but with some odd Manet-style brushwork thrown in for good measure...set into the most ridiculous frame I have ever seen.
What were people thinking? It was the size and shape of a Rumford fireplace, all in gold leaf. Poor Ms. Lust in her green, dusty cave with her carnival prize anaconda peeps out at us from under the mantlepiece, utterly cowed by her frame. I imagine the men of the period found her very stirring nonetheless but I felt kind of sorry for her, stuck in the fireplace with her goofyass snake.

Oh, and there were some ok Dutch Modernists from the 'Giant Enormous Fucking Canvas' school. I liked one called 'Film' but had nowhere to hang it.

Here are some pigeons that tried to mug us on the way out: 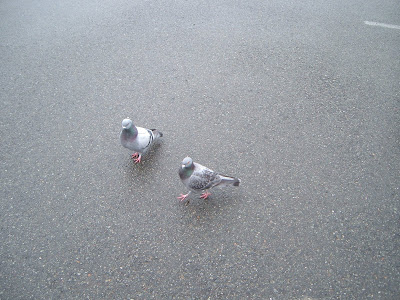 The fattest, sleekest, roundest pigeons I have ever seen. You could actually hear their feet pattering as they surrounded the car and started to rock it.

Later the Stainless Steel Amazon and I got lost looking for La Conner and ended up on Camano island. Here is a picture of the exclusive supper club we dined at: 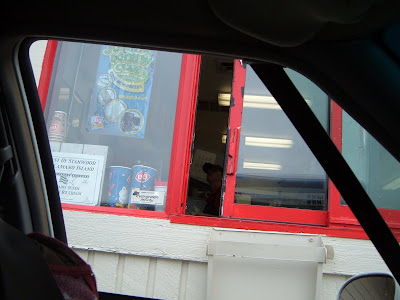 Mainly, it was a nice 'girls day out', no boys allowed. We drove around and discussed things like how buouyant are ducks really, and if one went over a waterfall would it sink or bob back up and if it mattered how big a waterfall it was.
Yeah.
_________________
Posted by FirstNations at 6:18 AM 16 comments: Links to this post