SANDWICH ONIONS...so simple yet so delicious
developed in the test kitchens of Rancho FirstNations by the Yummy Biker

1 quart jar of Kosher Dill Pickles, minus all the pickles, juice retained. I don't care what you do with the pickles. Stick them in your ear, decorate the Christmas tree, teach the dog to fetch...

1 head of garlic, crushed...more or less to taste

Ziggi wanted WALDORF SALAD...or, as it came to be known via an unfortunate spelling error, HOT TO MAKE WALDORF SALAD 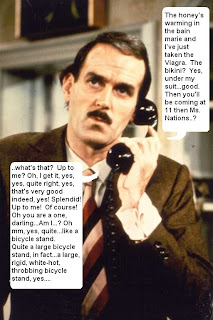 I am sorry, I'm afraid we're all out of Waldorfs just now.


(apples, mayo, celery and broken walnut pieces served on a piece of lettuce.)
Posted by FirstNations at 8:17 AM 20 comments: Links to this post

Portland , thanks to the mismanagement of it's city council, decided to go the 'tourist destination-renovation' route back in the mid-70's.
Of course, the first thing you do to turn your dying midtown core into a tourist destination is rip up all the streets in the main shopping district and put all the stores out of business. Then you make all those streets one way, no motorized vehicle throughways! And run the worlds saddest excuse for a public transit system through the middle of it all! In fact, you turn it into the central transfer hub of the entire far-flung metro system and pack it full of grouchy lost people making minimum wage and make them stand in the mud outside the closed department stores in the rain. Xerox off a few sheets that say 'Bus Stop' and staple them to some two-by-fours, call it a 'transit link' and there you have what passed for urban development Oregon-style.

Don't forget to stick a couple of hot dog carts in the middle of it all for that 'Noo Yawk' ambiance and man them with drug dealers.

It was to one of these hot dog stands that I was delivering a shipment from Hawaii. I had on my 'don't look at me; I'm a secretary' outfit and was carrying two ki's in my denim handbag, artfully hidden by a scarf and a pack of Salems.
There I stood in my denim smock dress and slingback shoes, reeking of Charlie and Clairol Herbal Essence shampoo, mildly stoned and thinking about the money I was about to get. I could have walked the ten or so blocks up to where my hot dog guy's stand was, but I was wearing high heels and couldn't be bothered. Any bus that came though would take me there, and I wasn't worried about paying the fare; since the new 'honor ticket' system had been implemented on the buses nobody paid the fare. You could , however, buy more than a ride from most of the drivers, and I was halfway hoping I'd get a cool one so I could do just that. It was beautiful: incompetence at the city level had turned it's transit system into city wide dope distribution-mobiles operating on the public dime.

I waited for my bus by the wall in front of the old courthouse, a beautiful grey stone building that dated back from the earliest pioneer days. Behind me, past the spear-tipped iron fence, a group of hippies were camped out on the lawn in quilts, selling bamboo bongs, roach clips made from hemostats and beads and jewelery twisted up out of discarded stripey electrical wiring. Next to me sat a tall Northeast guy dressed in a lavender suit and four-inch platform shoes. He gave me the hanging eyeball but was too busy to make conversation, using a credit card to clean an ounce of shake on an open album cover in his lap, letting the seeds fall to the pavement. College students passing pipes made from plumbing joins sauntered past in groups and left a trail of reek behind them.

A cop rode up on his horse and immediately a crowd gathered. Mounted policemen were another innovation intended to bring a little big-city flair to dirty old Portland. I flirted with the policemen while I petted the horses nose. Flicka stuck his head into my purse and started lipping the scarf off the dope. I rolled the scarf back around the plastic bag of bricked up ki's and the cop and I laughed. "You got a bale of hay in there or somethin?" he grinned.
The cop rode off, trailing mommies and little kids. The guy cleaning his dope smiled up at me and said 'The got those things trained like drug dogs, you know."
"Oh fuck you," I grinned.