I just got reminded that the word class has a straight definition.

When I was in making a payment on my furniture in ultra-Christian, ultra-conservative Lynden the other day I happened to use the term in passing. Extreme 'have you taken all your medications today?' look from the clerk. WHOOSH! Right over the windmills. Gone.

Our own Pamelas' son, Burning Buffalo Chaos, shows an innate understanding of the term. Not content with chopping enthusiastically at a pumpkin close to his tender regions with a huge knife, he subsequently filled same with gasoline, lit it on fire and lost all the hair on his arm in the resulting mushroom cloud. Then, in a brave attempt to save his home and family he kicked it. It rolled across the patio and into the yard leaving a trail of flaming cucurbitty devastation in it's wake.
As this demonstrates, class is equal parts panache and disaster. And fire.

The Hells' Angels showing up for a members' trial en masse in full colors THINK they have class.

The president of the Hells'Angels motorcycle club carrying the Olympic torch through the streets of Los Angeles riding his Harley actually WAS class...on the part of the Olympic Committee. Although they didn't realize it. Which actually kind of makes it even more classy.

A wealthy socialite getting stabbed in her own apartment by a burglar is a stupid rich twat who should have locked the damn door.

A wealthy socialite getting stabbed in the lung by a burglar in her own apartment, who PULLS THE KNIFE OUT OF HER OWN CHEST AND JAMS IT THROUGH THE PERICARDIUM OF THE BURGLAR AND THEN CALLS THE POLICE, PUTS ON A NICE ROBE AND WAITS FOR THEM ON THE COUCH WHILE THE BURGLAR WRITHES IN AGONY AT HER FEET is true class. Yea, a camel passes through the eye of a needle more easily, but this broad did it.*

Phantom class, with modifiers:
An apparition marching around the Tower of London with her gross messed-up severed head tucked under her arm and blood totally running down her dress and the stump of her neck all sticking out with tendons, and nasty ill gross crap all hanging down it is pretty goddamn classy.

An apparition of the spirit body of John Lee Hooker standing on top of a pile of burning Harleys is very fucking classy. If it hasn't happened it needs to.

A poltergeist manifestation of George Washington appearing to George Bush in the can and giving him a presidential twirlie while sticking a chicken up his ass is probably too classy for this dimension to sustain for more than a nanosecond without tearing a cataclysmic hole through the screen door of reality and letting in a bunch of flies and shit.


See! That wasn't so difficult! In fact, like MJ that was both fun AND easy!

Now that you have mastered this term you can hold your head up high at the next ABATE run. To be absolutely certain, take this quick test:

1. Guy in a brand new Viper doing burnouts in front of the Harley shop crashes into a line of parked bikes is...

* True story, too - even though I can't find it anywhere on the www; dammit. She had a fairly well-known name, too. Anyway it happened in the 1970's.
Posted by FirstNations at 9:06 AM 16 comments: Links to this post

Hold still, duckies.
I have a burlap sack here full of pine cones and I know how to use them.
I'm tagging all of you. 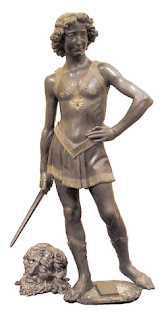 See, it just ain't gonna be a perpetual bouillabaisse of syntax errors and the word 'fuck' around here, kids. I have another, darker side. A side that I fully intended to blog about as much as I do all the other stuff until I became seduced by the bright lights and applause.

I am a history nerd.
I like medieval and renaissance Italy.
I read classical literature.
I DO IT FOR PLEASURE. Because I LIKE IT.
And I have questions. Several of them. I damn well intend to get them answered.
And what I need from you, my darlings, my lurkers, my pseudonymous peeps, are answers.

The mere mention of the first item on my list made one womans' e-mail go down and blew another blogger completely off the www for a period of months.

Scared yet? Too bad.
Because I am leaving this shit up until I get TEN USEFUL ANSWERS.
Specifically, I need the assistance of someone who has braved at least the Confessio and come out the other side alive, and who can hold my hand and pass me Kleenex. Only in book form.


UPDATE: the lovely and frequently transplanted ARABELLA comes in at number ONE! only nine more USEFUL ANSWERS to go before we're back to stories about public restrooms and how much I hate my cousin's wife!

VioletForTheMoment via her Companion Viola just came through with more Augustinian references than Carter has little liver pills! Companion Viola, you are a strong and brave viola with the cast iron constitution of a grizzly bear. I get to the part about the damn pear orchard and I throw the book against the wall every single time. ONLY SEVEN MORE!!!

PINK saves your whining asses with TWO SEPARATE ANSWERS bringing the total to FIVE!!!!!!!!!!!!!!!! The South HAS RISEN AGAIN AND THE SOUTH IS PINK!

so if the South is Pink and the East is Red...fuck it.
Posted by FirstNations at 8:55 AM 38 comments: Links to this post

Short version of story-
This morning I was sitting in my favorite chair, watching my shows, stitching away, when my glasses fell off.
Ok, fine; this happens all the time.
Upon finding them I realized that the earpiece had cracked off the frame.
So I fixed them: 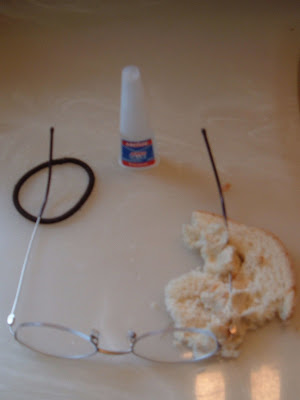 Note the innovative use of sandwich bread, and the attitude correction which a hair elastic provides while the superglue hardens.

The moral of this story is a long one, but read it anyway. Or did you have something else to do? So:
When you purchase glasses, bear in mind that the reason you need glasses is that you have POOR VISION. Hence the glasses themselves should be massy and/or colorful enough that finding them is at least a remote possibility when you are not wearing them. Do not be lured by the promise of light weight and unobtrusive design.

Also bear in mind that, having purchased the wrong frames (i.e. weighing no more than a cotton ball, cobweb thin, partially held together-and I shit thee not-with heavyweight nylon FISHING LINE) a safe resting place for them is probably not on the deceptively convenient shelf your boobs provide when you are sitting down. Because the phone will ring, and you will forget they are there, and you may hear them clatter faintly to the floor. Where they will lay. Invisible. Completely, utterly and tragically invisible.
And in the process of searching for them you might step on them and crush them flat.
Really, really flat.
Except for the piece that fell off.
Stuck in the sole of your slipper.

I hope we can all learn something from this. Besides the obvious 'I am a dipshit' implications.
Posted by FirstNations at 9:05 AM 20 comments: Links to this post

update!
you say you feel like deep fried doggie squattos? you say all your clothes smell like the carpet in an elevator? you say your mother braids your hair all funny? dammit, bucko, go HERE now and read the post entitled 'Nothing Compares to 02' and get over yourself! you, like me, will laugh so hard you will pee yourself a little bit.
NOW GO!!!!!

This group carried with them a GPS rescue locator.

This device costs about 500.00. It can be rented from REI for FIVE DOLLARS.

This group was nowhere near as experienced as the group that Mt. Hood took back in December. They probably had no business up on any mountain, really. They brought a Labrador Retriver with them, for heavens' sake. But unlike their counterparts, they did realize, apparently, that
1. Winter on a mountaintop means the chance of shitty weather. This has the potential to make 2. mountainclimbing, a dangerous sport at the best of times, an even more dangerous sport. And so
2. taking reasonable precautions is a good idea.

The governer of Oregon is considering making these GPS devices mandatory for climbers statewide.
I say well done. Do it yesterday.
It's about goddamn time.
Posted by FirstNations at 8:54 AM 13 comments: Links to this post

This here is my boydog Opie. 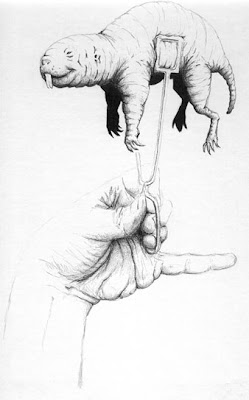 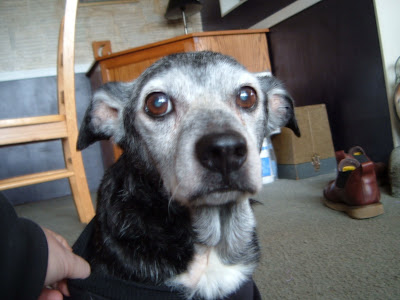 The vet pulled every tooth from his upper jaw two days ago. All he has left up there are the incisors.

I am a sucky dog owner.

Now, in our defense I will say that neither my husband or myself have ever owned a dog that lived to be Opie's age (either 14 or 18, depending on who examines him. We got him from the pound as an adult dog.) So when he gradually became smellier, skinnier and grouchy about having his head touched we figured 'well, he's just getting old' and continued on in our ignorant, brain-dead stupor. Then my husband happened to catch him asleep and lifted his flews to see what was going on...and came into the kitchen white as a ghost. That poor dog's mouth was BAD. I won't even describe it and that's not to spare your sensitive constitutions but because I'm ashamed that something in my care reached such a condition and I never noticed.

The good news is, we took him to the vet, they cleaned him up, and now three days later he is tatoing around, burping and farting and saying 'eeuroop' like NOTHING HAPPENED. He is a new dog. He slept off the anaesthetic and never looked back. He has to eat soft food now; that's it. I am absolutely blown away.

I really feel like shit about this. He must have been miserable for so long. It's a lot like when you have an infant and they get an ear infection...they can't tell you what's wrong, they just cry all the time, as usual, and you never get a clue until they get really bad.

I want to apologize to the poor little guy. But he's a dog. So he still loves me like nothing ever happened and nothing was ever wrong.
I just feel like shit.
Posted by FirstNations at 9:24 AM 22 comments: Links to this post