You know how your significant other will usually have one friend who is an utter waste of skin? Someone you cannot imagine anyone associating with, much less the wonderful person you love?

For ten years now my husband has had a friend named George.

George, according to George, knows Tom Robbins, the author of 'Still Life With Woodpecker', 'Another Roadside Attraction', etc. Grew up with him. Blood brothers.
Whenever Tom's in town he visits George secretly, at night, and is gone with the dawns first light, because he doesn't want to cause a lot of media hoopla.
According to him, Tom Robbins weighs 500 lbs and is probably going to die of a heart attack.

According to George, he grew up with the Kneivels...Evel and son Robbie.
Rode motorcycles with them. Blood brothers, in fact.
When Robbie came to jump some cars here in Deming a couple of years ago, ol' George says he went up there and tried to (play the 'known him all my life' card) get in to see him, but Robbie Kneivel said 'Never heard of the guy' right to his face.
George says this is proof that Robbie Kneivel has gone Hollywood.

His daughter has recurring spells of hysterical blindness caused by his ex-wife's infidelity. According to George.

And yet, illogically, and according to George, he (profoundly and continuously stoned every waking moment ever since I've known him and unable to lift a finger, let alone Mr. Happy) and his ex-wife (300 lbs, full time job, depressed and raising two teenage girls alone) were swingers (unable to pay rent or buy groceries, had their Christmas turned in to a charity media event by a local radio station, yet paying dues to all these private clubs) screwing celebrities and government officials and people you wouldn't even believe, man.
This means that if you swing, and you live in the Seattle-Everett-Bellingham area, you probably have fucked either George or his ex-wife, according to George.
I hope you were wearing a condom.

George is incapable of paying a bill or keeping a running car.
But according to George, he came into a huge inheritance two years ago. In the middle of a raging statewide housing market, George claims he lost it all investing in real estate.

George has several original M. C. Escher lithographs and several Aubrey Beardsley prints in a safe deposit box. And a rare match edition ( Wurlitzer-Bullshitpalooza, signed by all twelve apostles with engraved meteoric silver and unicorn horn inlay something or other) rifle.

Seven years ago, George claimed that doctors had given him less than year to live.
He begged my husband to kill him. My husband refused. George said he understood.

George then had a premonition.
He would die that coming April 24th.
In June, after everyone (including George) had forgotten this dire prediction, I pointed out that he was 1. Well past his expiration date and 2. Still miraculously undeceased.
This was widely regarded as having been in poor taste on my part.

George has been dying of a mysterious ailment for the past sixteen years, according to George. As proof, occasionally George will suddenly remember he's supposed to be dying, freeze, contort his face, gak a couple of times and keel over.
No.
I am NOT KIDDING.
He has run up several hundred thousand dollars trying to get this mystery ailment diagnosed.
He cannot pay these bills. Not even Bill Gates could pay these bills.
Not even Tom Robbins.

George, as you might have guessed, is captain of the good ship Munchausen.


His latest pile landed in my ear about an hour ago. (I wrote this yesterday. Now it's today.)
"Uhhh...I have a question...You probably know what I'm talking about when I mention... Aleister Crowley...? Maria Blavatsky....?" is how the conversation started.

According to George, he had come into the possession of a hand written, original manuscript of the book of Dzyan. He alluded to its having been found in mysterious circumstances, and that some poor guy died right on the spot, probably suicide, man, where it had been found, and that there were lots of other really sick, weird stuff with it. That it was probably worth a lot of fuckin' money to someone.

Now, George has been in jail for the past couple of months.
According to George, he has been in Venezuela.
Despite his outstanding warrants.
According to George, one of his 'big dope growing buddies from Wenatchee' took him.
Out of the country.
To Venezuela.
Where he found this hand written manuscript of the book of Dzyan.
In a cave.
Along with an infants' skull.
"...And you know what that means..." Said George knowingly.

When George arrived he produced an old, mimeographed transcript of a Theosophy lecture.
No skull.

See, that ruined my entire fucking day.
I was really looking forward to the skull. I wanted to hold it in my hand and gaze into it's hollow eyes. Maybe lick it.

I wonder how much money he borrowed?


...And yes. I AM a pitiless bitch. But that's aside the point. George can't afford child support, he can't afford rent, but he can ALWAYS afford to cram every illegal narcotic known to pharmacy science into his head.

He knows. Oh fuck yeah, he knows.
Posted by FirstNations at 5:29 PM 27 comments: Links to this post 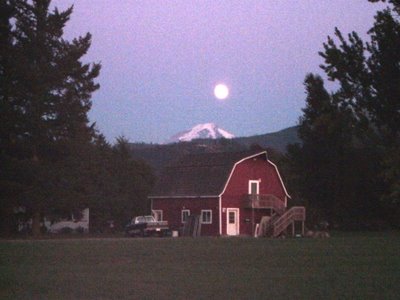 This was the view from the end of my driveway last night...the full moon rising over Mt. Baker with my down-the-street neibor's barn in the foreground.

Next month something interesting happens, sky-wise; so if I remember, I'll try and take a picture of the moon in the same position, but with a bright yellow star directly over it: star, moon, mountain, barn.

Well, enough of that. 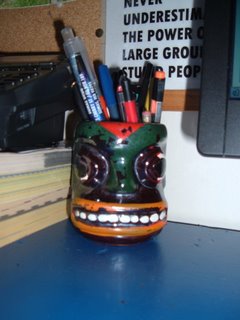 Right now this is what's staring at me...this canadian severed totem pole coffee mug head with pens stuck in it.
Gaze upon it's potent tackiness.
Ponder it's unnerving gaze filled with mysterious knowing.
Thank whatever God you worship that it is no longer at large in the community. 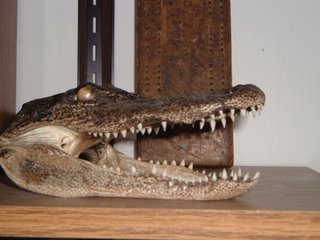 "Hey Coon Dog!" we said. "When you go back to Louisiana this year, bring us back a souvenir!"
We got a severed alligator head and a half-empty bottle of hot sauce he stole from the resteraunt at the airport. 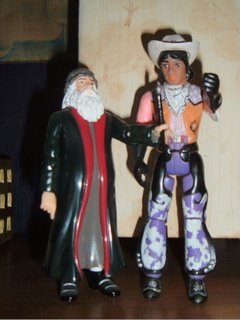 Leonardo DaVinci and Cowboy Curtis sharing a doobie on my bookcase.

" ..But dude, I still dont get whats so funny about Snakes on a Plane."
" Now gol-durn it, Leonard, jest lay offen that subject for about five muthafuckin minutes, wouldja?" 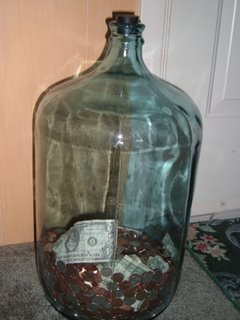 To further my image as the wealthy, devil-may-care citizen of a first world nation, I leave giant jugs of money lying about my house.

There must be virtually oneses of dollars in this one alone! 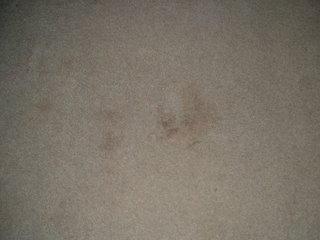 This is the stain that was on my carpet yesterday. Now you tell me why a bunch of Crisco appeared in my sink.

Was it a miracle? 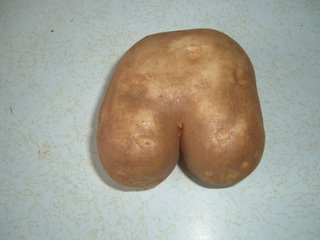 Check this out! It was in my cupboard!
You know how people are always finding tortillas with the face of Jesus on them? 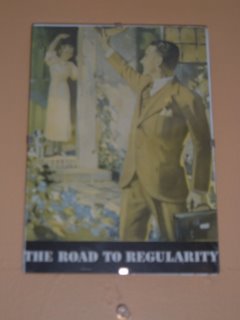 For the past twenty-one years the Yummy Biker has hung this picture over the doorway of our kitchen.
It may be a compliment.
It may be a warning.
Mainly I think he likes it because it says 'Regularity' and thats funny if you're German. Or Beavis and Butthead. 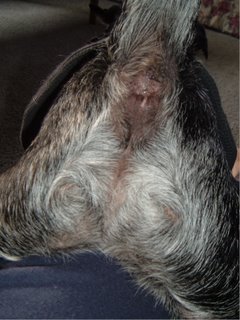 WORSHIP THE GLORY THAT IS OUR SPORTSTER 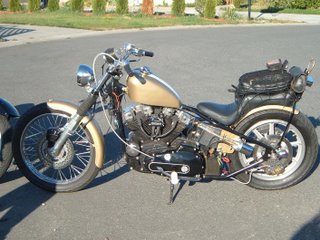 
Deal with it, bitches.

I had a spot on my carpet. I have no idea what substance was responsible, although I suspect it was something goonybird-related. Anyway, for an amount of time that I refuse to admit to I have been treating it with the attitude 'if i ignore it, it will ignore me', and while it has been ignoring me, it has also been getting darker.

I finally broke down and scrubbed it out oldschool, down on my hands and knees with (a large tube of Astroglide and a mardigras mask), a handfull of rags, a brush and a squirtbottle of oxybleach. Leaving me with a nice clean spot on my rug, but since it's now a spot of a color sometimes found in nature I figured I was still ahead of the game.

Until I went to rinse shit off in the sink. Suddenly I have this blossoming of small flakes of white, hard grease appearing. Like flakes of suet...on everything I was using and all over the inside of the sink.
Where the how the fuckin what in the hell?!?

It was like a strange little cosmic event. And really, thats the kind of cosmic event that I'd rate. Other people get alien monoliths with cryptic inscriptions; I get sink crud from another reality.

That probably caused a few new grey hairs, and we can't have that. So I decided to touch up the roots.

Now I am cheap. (and judging by the above I'm dirty too. So why am I broke all the time??) When the hair dye warns 'Caution! Throw unused portion away! Storage of the mixed product in a sealed container may result in explosion!' fuck; that's like a challenge. And a challenge delivered with the promise of something exploding? Who in the fuck do they think is buying this stuff??

So it was that I reached for the mixed product that had been sitting in my medicine cabinet for a week, unexploded, cautiously undid the cap-still no explosion dammit-and proceeded to lose that grey.

Hair dye doesn't smell real good on the best of days but when the funk off this shit hit me it about made my eyes cross. What did it smell like?

But it was already on my head.

So I left it there.

And forgot about it while I vaccuumed the carpet.

One hour later when I reached up to adjust my glasses I realized that I wasn't wearing glasses and that I had a head full of goop. I rinsed it off...no more hairs in the tub than usual...dried it with a towel...no hanks of hair coming off in handfulls...checked my look...no bald spots...

So far so good. In a couple of days I may break out in pus filled head hives, but for now, I look ten years younger.

And my house smells like the bathrooom floor in an 'Eighties nightclub.
Posted by FirstNations at 9:42 AM 21 comments: Links to this post