Lets take a peek at how things are going so far, shall we? 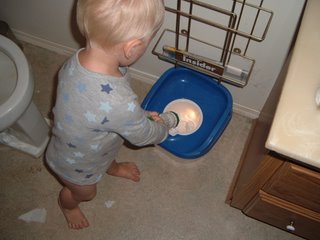 So. Just where do things stand here at Rancho FirstNations at the beginning of the Fall season, mouseketeers? 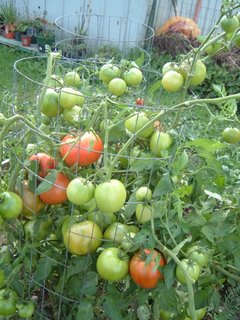 Right about here. Take a look at this shit. I have never in my life had tomato plants that produced like this. It's almost FRIGHTENING.
I went out to 'stop' the plants yesterday...clip all the leaves, sucker the vines off and basically put an end to the tomato tidal wave for the year. This is only a small part of what's left. This is about ten gallons of sauce, folks.
HO LEE CRAP. 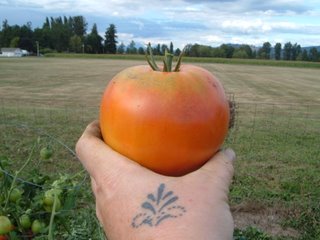 ...and this is a little LESS than the average size of what I've been harvesting. Beefsteak tomatoes BIGGER THAN (whatever that huge damn mountain in the background is called. The one you can't see. So much for that set-up.)

You know what? Nobody knows what that mountain's called. Nobody. I've asked. Blank stares.
Americans have no clue. Who cares? It's in Canada.
You can ask Canadians. I have. Standing right there in the parking lot of Revy with this huge glacier covered motherfucker looming in the background. And they say:
1. Oh. Is that in Canada?
2. Uhhh....Baker? (Bzz! Wrong. Baker's south, in the U.S.)
3. I dunno.
4. It's the Sawtooths. (Bzz! no, thats a RANGE.)
5. Isn't it the Cascades? (Bzz! Thats a range as well.)
6. Oh, thats the Olympics. (Bzz! Another range. To the west. In America.)
7. Vancouver Island. (Bzzbzzbzzbzzbzzzzzzzzzzzzzz....oh, fuck it.)
8. Oh. Is that ours?
9. Mt. Canada. 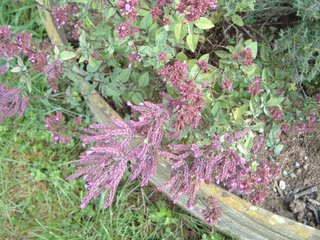 My oregano did wonderfully this year. This is a 'border' variety, grown more for it's pretty purple flowers and buds than its culinary value; although it is culinarily valuable despite that. (Woo, that just about caused an aneurism; time for coffee.) 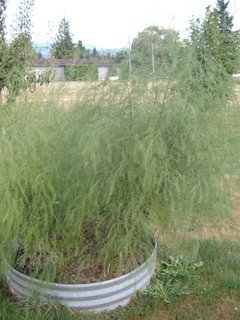 Asper Aggus! Grown from seed, baby. Thats right.
Next year is the big one! First harvest!
Once this frost kills I'm going to put some composted manure on it and let it rot down all winter long. Oh my yes. 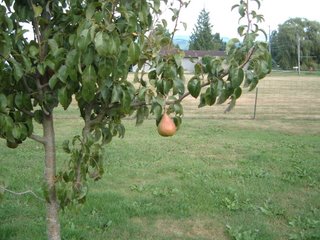 My magnificent pear harvest. Always just one, always in the same location. This never bothers me since I bought the tree as an ornamental; it's not supposed to have fruit to begin with, but there you have it. Froot.
One lonely pear.
*snif* 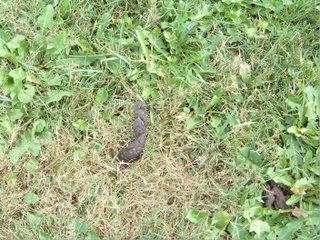 One thing the recent rain did was to rehydrate all the dog crap in the yard. It's a fricken mine field out there now! How do two small dogs DO all this? It reminds me of like how a newborn baby barfs up three times as much as your pour into 'em. 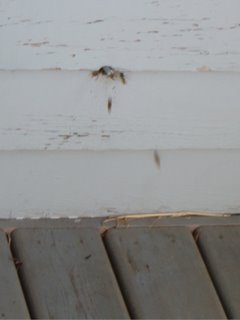 I hate to tell you I burned through 53 images before I finally got this one.
This is the bee nest on my porch. It's hornets, and they're living in the wall. Their entrance is where the old cable service was let in. Right by my front door.

Imagine me hanging by one cheek out the dining room window with this camera, shaking like a leaf with a huge cloud of hornets buzzing around me. I was obviously never able to get a picture of the way this really looks due to the limitations of the technology-and my courage - but believe me when I tell you there was about thirty of them at any given moment and at times they were hanging down from the entrance in clusters. GAAAAAAAAAAH.

There have been no Jehovah's Witnesses thus far this year, though.

Ah, but for all I know there IS one. He's been killed, nipped apart into
tiny bits and stored in the wall.

You can't make it out, but the wall around the hole there is spotted with crud dabbed by the hornets, who leave empty but return carrying blobs - every single one of them.
What are the blobs? Glad you asked.
Hornets live on two things: dead animals, and shit.
True fact. Didn't you ever wonder why the woods are so tidy? Hornets.
They eat shit.
My wall is full of carrion and shit.
And hornets.
Tonight, hornets, you must DIE.
Posted by FirstNations at 9:08 AM 19 comments: Links to this post

Now here's a meme I stole via a long and twisted journey... kat thru goodgirl via brian after G!

People who make me laugh.
1. John Cleese
2. My husband
3. My Goonybird

Things I hate most.
1. theives
2. liars
3. criminals...who are thievish and lying, so there ya go.


Things I don't understand.
1. most foreign languages
2. Most people
3. How my daughter got to be a supergenius... She's one of those people who reads books about math for fun.


Things I'm doing right now.
1. cooking pasta
2. smelling dog ass...not voluntarily, btw. The tatopig is lying under the desk by my feet and kind of slowly deflating in his sleep. As Opie has advanced in age gas frapulence has become kind of a constant thing, which I suppose is the fate which awaits us all.
3. hoping for rain (update-boy, did I hope GOOD. Raining pitchforks and drag queens out there now.)


Things I can do.
1. tiny, complicated, dainty hand sewing and embroidery. Were this the 1800's I'd not only be employable, I'd be in high demand.
2. draw a fair likeness .
3. raise healthy plants

Things I think you should listen to.
1. yourself.

Things I'd like to learn.
1. Italian
2. latin
3. how to generate cash out of thin air


Shows I watched as a kid.
1. Batman
2. Bugs Bunny
3. Star Trek-the origional. I was a trekkie before there WAS such a thing and grew out of it before it became synonymous with 'unlikely to reproduce'

Once again, duckies, looky looky....look who's got nice breaaaaaaad...*gathering pinecones* thats riiiiiight....swim a little closer.....
Posted by FirstNations at 9:39 AM 12 comments: Links to this post

Some of you have been living the breezy alternative life on the coasts of Spain, partaking of exotic drugs and hairy heinie....

Some of you have been *ahem* wind surfing (is THAT what they're calling it now?) in
the Mediterranian...

I went here over the weekend: 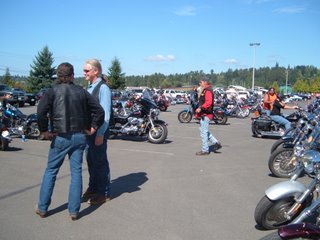 ...with the COOL people.
This is a partial view of the parking lot of the Fall Monroe ABATE swap meet. Most of what you see parked belongs to patch holders. ABATE swap is one of the big 1%'er events of the year in this neck of the woods. 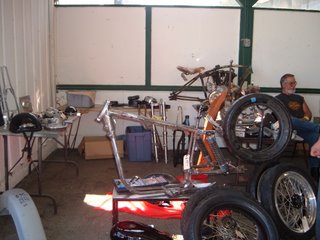 Here's our hooch. The left side looks a little bare because our crap sold out pretty quick. Most of the rest was our buddy Albert's stuff, and a lot of it was not meant to be sold, just attract attention...like the 1919 engine and frame in the background. 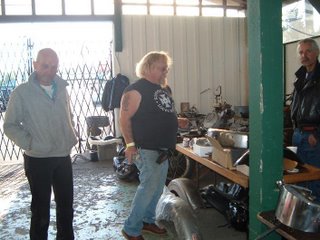 The guy on the far left with the giant moon head is Albert, early a.m. looking pretty normal and subdued, for Albert. This guy is 62, looks 40, acts 20 and has never finished a sentence in his life. He's a lifelong biker and holds a Masters in engineering. About five years ago, everyone on the mountain with a scanner heard the aid call go out when he broke two fingers AND sent a woman to the emergency ward with a dislocated vertabrae when he fucked them both right off the bed.
Ooo - See that hot rockin' bear center stage? He hung around all day. That is Prime three-Legged North American Technicolor Griz. Fine? Cute? Butch? Oh my GOD. *fanning self briskly* 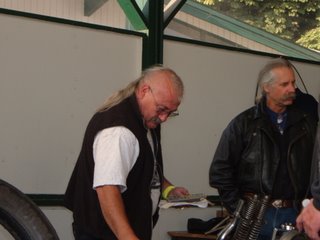 Here's our next-hooch neibors. Deal with the hair on the little fuck. That's a shaved mohawk with a rattail mullet. Last year it was down his back...he must have got it caught in something. Both these guys are officers in the Banditos we've been seeing around for years. They turned out to be pretty cool for patch holders. 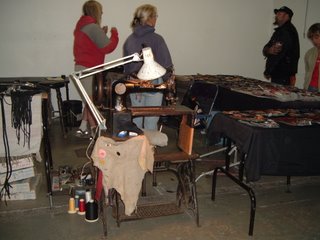 Hardcore alternative. Until her husband died of cancer a couple of years back, they both lived totally outside the straight economy, on the road, travelling around to bike events, sewing patches and doing leather repairs.
Once the event opened they were completely surrounded three deep all day long. Thats been the norm during every event I've seen them at for 20 years now. They clear several THOUSAND a day. Not bad for no overhead and 10 hours of work a WEEK. 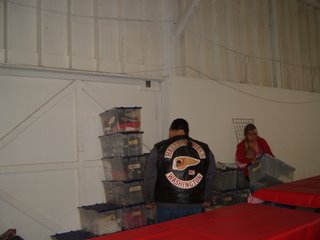 Here's the Red and White setting up just like regular ordinary mortals.
They sell stickers, t-shirts, halter tops and thongs with 'Support your local Angel' on them.
Right.
Like I am going to
1. pay MONEY to
2. wear Hell's Angel underpants.
Perhaps not.
Should I feel the need, perhaps I'll just get a Magic Marker and write 'Yes, I am a big ol' loser' across my forehead instead. 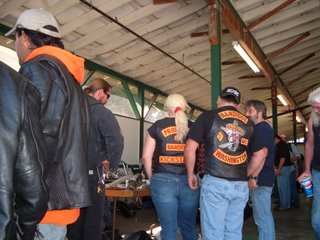 What you are seeing is real, and it was not the only one in evidence by a long shot. This is a woman in her forties, in the year 2006, wearing a 'Property Of' vest.
Thank you madam. You have just set the Women's Movement back 150 years.
Now to be completely fair, when her old man turned around, it could clearly be understood by anyone with normal eyesight WHY his roadname was 'Kickstand' so maybe she doesn't give a hoot in hell what I think about her wearing the 'Property of' vest either. Hmmm. 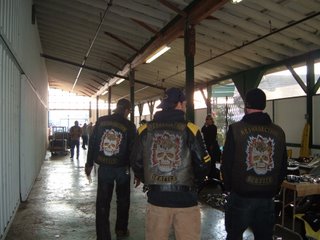 This year 'Resurrection' was representing pretty well. In years past maybe one or two guys would show up, but this year they were all over the place. If you can't make out the picture, it's a motorcycle bursting out of a fiery skull. Goofy, but a lot of these patches were designed by tattoo artists in the 50's so they have that retro thing happening. They seem like pretty good guys, and they don't wear Bandito affiliate patches, so they're two points ahead with me. 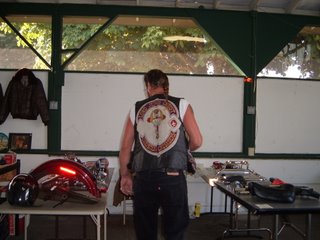 This mullet belongs to an 'outlaw' Christian m/c. These guys are just about the most scuzz-encrusted, greasy losers you'd ever want to avoid; and this in a subculture not known for it's personal daintiness. Most of them found religion in jail. Their prez was a huge, fat sonofabitch with long white hair and the delicate, lingering aroma of armpit ass-socks. His cut was literally stiff and shiny with filth. I had to nudge his flab out of my path one day to look at something and he gave me one of those 'you dare exist?' attitudes, which I ignored, coming as it did from his punk-raping jailbird ass. This year everyone is wearing 'R.I.P. Preacher' patches. One pities the mortuary technician on duty that day....eugh. 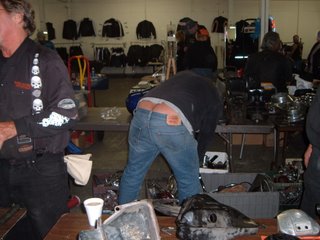 Goddammit; where is Nancy Reagan when you need the bitch? 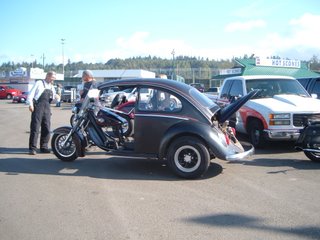 Remember these?
Sucker ran like a scalded cat, too. You take that much mass off a Volkswagen bug, though, and that's what will happen. His bars stretched back about 2 1/2 ft into the cab.


You know, despite my tone, I had an excellent time. This is my peer group, after all...black clad rowdy smartasses who like to go fast, travel light, set shit on fire and make loud frappy noises.
I can take or leave most of the women, but if I am predeceased by my present husband, I know exactly where to go for a replacement. No shit- I spend a day at this place huffing all this leather, motor oil and testosterone, and by the time we leave - ahem. Never mind. Sometimes my daughter reads this. But thats a fact.
Posted by FirstNations at 7:24 AM 26 comments: Links to this post