He's taken, Back off.

I'm sitting here at 8:30 pm and my Biker is making a country sausage gravy to take for a breakfast potluck at work. He's using organic boar sausage and making the cream gravy base from scratch, whisking the milk and flour and spices about behind me here in the kitchen and making the place smell like heaven.

As I've said before, this man is a genius of flavor. We can confidently hold our own against most restaurants serving American home cooking and better most of them; but its his ability to divine the source of the flavors and knowing how to bring them into the mix that makes what we cook here so goddamn excellent.

It's 9:pm and the sauce is finished. The Biker is in bed. The sauce will mature overnight and tomorrow morning when he serves this at work he's going to have straight men begging to suck his
*ahem*
begging for the recipe. 20 minutes spent, scratch to done. Sausage browned with onion, cream sauce thickened, corrected and finished. Simple and absolutely SUBLIME.

Another guy is making southern style beaten biscuits, and this gravy will go over top of that, with eggs on the side.

You WISH you could be there, bitches.
Posted by FirstNations at 8:32 PM 33 comments: Links to this post

If Pither can do it then so can I

In this corner, God of rant REG PITHER ! 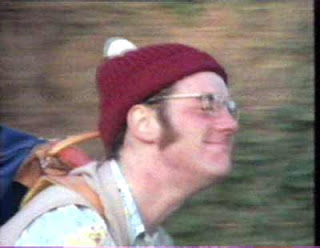 Well informed! As far as I know, anyway;
he writes about British stuff. Sounds good.
Pissed off anyway.

IN this corner: DANGER MUK!

1. Researchers are claiming that they have found the reason the Titanic went down: substandard rivets.

Folks, the Titanic hit an iceberg the size of the Balkans. At that point the quality of the rivets became moot. Get over it already. It sank. It's over. Move on.

2. Was there a US-government based conspiracy to assassinate JFK?

3. Was there another shooter on the grassy knoll?

Your momma was on the grassy knoll. With J. Edgar Hoover.

4. Was Marilyn Monroe killed by the FBI?

No. Kennedy played hide the salami with every woman who crossed his line of vision. Some of them were married to his political cronies and some of them were the girlfriends of mobsters for heavens' sake. He wasn't exactly scrupulous - OR careful. So out of all the women he ever nailed why kill the one who posed NO THREAT WHATSOEVER TO HIS REPUTATION? (Enhanced it, in fact. The leader of the free world was 'entitled' to bonk Monroe. It was a man's world back then and they're still going 'har-de-har-har' about it the same way they did when Clinton nailed Lewinsky. Please.) Is anyone dumb enough to believe that he laid up in bed with her and gave her a bunch of ICBM fire-codes or something? She was Marilyn Monroe! They weren't talking! The poor woman accidentally did herself with booze and pills. Please just leave in her grave already.

5. Was Princess Di killed by the British Government because she was making squishy squishy with a sand minority?

Princess Di should have been knocked upside the chops for even coming within a city block of Dodi 'Greasy Lowlife' Fayyed, but she was killed in a drunk driving accident. Shit happens. Nobody killed Chuck 'Cardboard Applicator' Windsor and look what he's been...*ahem* up.
To.


6. Did Bush steal the election?

He got Christmas presents that year, didn't he? Well, there ya go. Do you think he would have got any Christmas presents if Santa Claus thought he'd stolen the election?
See, now you're just starting to piss me off.
Did your mother huff Regular or Ethyl? Did she drop you a lot? Have you spent the last 30 years of your life wearing a helmet and eating sugar out of the bag? Jesus CHRISTgrab a CLUE.

7. Should Northern California, Oregon, Washington, Montana and Idaho secede from the Union and set up a sovereign nation of their own and call it Ecotopia?

Yes. If y'all hadn't been so busy selling Oregon to the Japanese and mating in public discotecques like a herd of Aquanet-glazed mink with the music all going WHUMPA WHUMPA WHUMPA WHUMPA you would have realized that Ernest Callenbach was a prophet inspired by GOD, and done the right thing. Well, like any prophet Ol' Ernie wasn't honored in his native land, and now his native land is overrun with trash-ass lowland Southern Californians and effete failed New Yorkers who won't be satisfied until this place is just as big a shit-up wasteland as the toxic sewers they left in their wake. You had no excuse. The technology existed. Disney preserved Walt's brain in a jar so they could hook it up to a motherboard and route their payroll department through it; well, you shoulda done the exact same thing with Tom McCall. 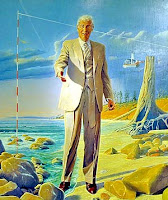 We could have mounted it in a Dalek-type thing with a toilet plunger on the front and he could have rolled around and been in parades and levitated and shit. We'd all be living in an 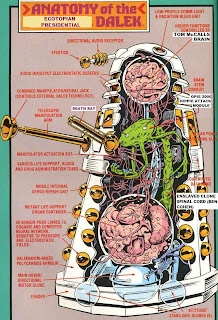 environmentally pristine, socially enlightened country instead of a place that the rest of the nation considers an inexhaustable grab-bag of natural resources where picturesque Native Americans roam through the forest primeval bapping each other with little sticks and Laura Ingalls Wilder kicks the shit out of gas station attendants and pees in their soup. Tom wouldn't have put up with that shit!! OO! You don't want to pay a reasonable market price for timber? You don't care if our native salmon are getting ground up in the Bonneville hydroelectric dam just so you can leave the Hubble space telescope on all night long and spy on naked broads in Iowa? Is the mean ol' president gonna get pissed off? Is he gonna send some black helicopters? SEND THE MOTHERFUCKERS! OOOOO, IM FRIGHTENED! OOOOO, WHERE DID THESE MYSTERIOUS UNMARKED HELICOPTERS COME FROM! OOOOO, MAYBE I OUGHT TO USE MY DALEK DEATH RAY ON THE HELICOPTERS! HUH? WHADDYOU THINK, BITCH? And he would win!!!! Then we'd all be happy walking through our old growth forests breathing our clean air and drinking our nice espresso behind our nice safe wall and everyone would say 'Thank you, thank you, Tom McCall, you saved us!'
And there would be a big party and you would be invited!
But you'd have to go home after.

...See? Theres nothing anyone can do about it. I'm drunk on power, baby.

Posted by FirstNations at 1:29 PM 34 comments: Links to this post