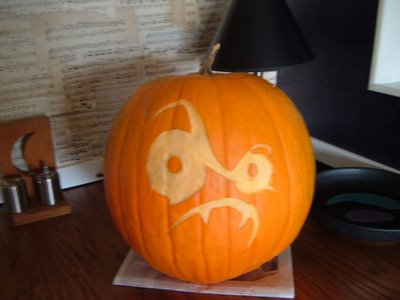 Now go HERE, and read this post
(Sunday, October 29, 2006 My Son Has Outdone Himself Once Again )
and find out how a pumpkin should REALLY be done. And join me in welcoming the newest member of the FlatButt Nation, Burning Buffalo Chaos!!!!

Well. Now It's time to write the dreaded Halloween Spooky Post you've all been waiting for and I'm a little reluctant to do it. But here goes.

Yes it really happened. And thats the first and last time I'll ever say that here.

I have had lots of bizarre things happen to me in my life...some of them perpetrated by the living and some of them perpetrated by the living in ways I didn't quite understand at the time. I strongly suspect this story falls into the latter case. At the time I was so frightened it didn't all hit me at once but kept rolling over me in waves for weeks afterwards. At the time, I thought it was proof of Satan.

My mother, up until the time of her conversion experience, was a deeply superstitious person. She was a believer in spirits and Spiritualism, communication with the dead, angels, demons, posession and ghosts. When an item would turn up missing in our house, once everyone had been found guilty and then dismissed through lack of evidence she would head for the hall closet and pull out her Ouija board to ask the spirits for assistance. This was standard procedure for years.

From the time I was old enough to sit still, about four, I was often the second set of knees under the board and the second set of fingertips on the planchette. I recall her using the thing by herself, too, seated in a chair next to my bed while I settled down for a nap. And this never seemed odd to anyone, not even to me, not for years. It worked.
And thats something to remember here. Bear that in mind.
It worked.
Lost items were found. Forgotton names were revealed. It was used to find lost keys, jewelry, paperwork, gravesites (we were the caretakers of our town's Pioneer Cemetary and records were sketchy) waterlines, etc. In fact it succeeded on the waterline location issue where the city and a dowser we'd called in had failed.

My mother was convinced that I had either a gift of 'sight' or at least attracted unseen helpers gifted with same. In any event I grew up believing that an unseen world with purposes of it's own surrounded me, rearranging small items around the house, making the cats stop and stare at nothing and generally dicking with our heads, and that I was attracting them.

By the time I was eleven or twelve the weird was running full bore. My mother taught herself to compose astrological charts. I had been given a set of Tarot cards-her old ones. 'Fate' magazines littered the basement and front room, Edgar Cayces' collected works were in the bookshelves, Jeanne Dixon was a household word and Yuri Gellar was taken at face value. Oh, we never missed Yuri. And each time he appeared my mother would send me into the kitchen and dining room during the commercial breaks to check and see the clocks were still running and the silverwear wasn't jumping around inside the drawers. In fact he got the blame when her watch stopped running and she wondered whether or not she should call the Mike Douglas Show and tell them about it. I suspect she may have, and I think she wanted Gellar to pay for it to be repaired.

One evening we had company and the subject of the Ouija board came up. Everyone was all for it, until the thing actually came out of the box and then they chickened out. My mom came and got me, and I was happy enough to join her. Everyone gathered around us and we set up, chairs facing, knees touching and the board resting on our laps, fingertips barely contacting the planchette. My mother was very particular about all this.... your fingertips had to be arched high and over, like a pianist, so that only the barest dot of skin actually contacted the surface. Nobody could talk. Nobody could laugh. Nobody could interrupt and the television had to be turned off.

I don't remember what the questions were. Stuff like 'name everyone here' and what's your name' and 'when did you die' and shit. The questions never mattered much because the whole point of the experience was watching the planchette glide around the board, A, B, C...Yes, No....and this time was similar. And as soon as I touched the thing it set off around the board in long, slow arcs and away we went. Our company was absolutely fascinated.

The initial glee and amusement wore off instantly when the planchette began moving faster. It started spelling out words so quickly that our designated scribe had trouble keeping up. The whole company started calling out the letters. Everyone was gathered closely around watching.
The damn thing would not stop. It circled around and around the board, stopping over letters just long enough for the group to call them out to the scribe.
It started to be a chore to keep my fingers on the planchette. My mom realized this at the same time and we glanced up at each other in surprise a couple times. Her touch was so light you could hear her fingernails chattering lightly on the plastic. Finally I had to lean over the board and follow the movement with my arms in motion just to maintain contact.
The group was still calling out the letters and the scribe was frowning at her notepad. She started to act concerned, then irritated and then put the notepad down. 'It's a bunch of dirty words', she said, only half amused.
My mother took her fingers off her side of the planchette and settled back in her chair. My fingers were still on the thing, and I was still concentrating on keeping up. The planchette kept racing around, pulling me after it.
And then suddenly it shot sideways off the board, across the room, and hit the fireplace like a bullet.
Pause.
And then scream. Everyone jumped back, my mother stood up, knocked her chair over backwards, and there I sat with the board still on my knees gaping at the fireplace with my hands still poised midair. Everyone was jumping out of the way and yipping and milling. 'Why'd you do that for!' shouted my my mom.
'She didn't!' replied several guests. 'I didn't', I added. 'It did it itself!'
The notepad was being passed around and when it reached my mom she laughed, tore the page off and threw it away, with me clamoring after her to show it to me.
The Ouija Board got burned.

To this day I look back on that and time still hasn't changed my perspective or my understanding of the event. And I really want that to happen, y'all; I mean, I want a rational explaination for what I remember clear as a bell. I was barely, barely touching the planchette when the thing thing shot away sideways-horizontally-like a whipcrack. It shot across the room like an arrow for twenty five feet, hit the fireplace in the next room with a crack and rebounded off it. I felt it take off. I was looking at it when it took off. My mother, my aunt and uncle, and a woman named Meta were looking too, and my father and another man were present in the living room and complained loudly when the thing hit the fireplace near them. The lights were on, I for one wasn't in an altered chemical state and...there you go.

Oh yes. Happy Halloween!
Posted by FirstNations at 7:45 AM

Labels: The Ouija Board