Because YOU ASKED FOR IT!
Actually nobody did but here it is anyway; the floorplan of the Meadows' lair: 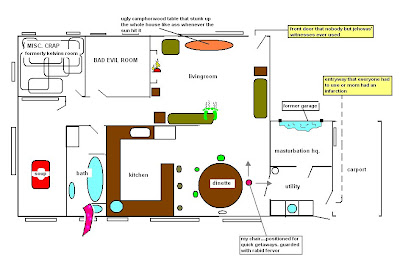 As the summer wore on the Meadows started showing up at the abandoned house for work parties more often. This just harshed the fuck out of my mellow. Gone were the hours when it was just me, a broom and a garbage bag, or me, the lawnmower, and Aunt Audrey's charred bone fragments.

By July I had to show up every single morning down at the house for the daily unrealistic remodelling goal/harangue and then off to the hardware store, Eldest Brother driving, Kelvin asleep in the cargo bed.

Kelvin and his father worked nights. This is why they greeted the dawn with a nutritious glass of orange juice and vodka; early morning was their evening.
Nonetheless, Kelvin was expected to spend his days working on the remodel while daddy slept. That he usually didn't wasn't something I held against him; shit, I didn't want him around. And besides, the creepy little pervert genuinely needed his sleep. Between his night terrors and daddy rousting him out of bed every morning at 6am he wasn't getting much. Sleep deprivation was certainly not making him any more normal, that was for sure.

Eldest Brother didn't have a straight job. I have no idea what he usually did with the greater part of his day. Probably worked on his Interociter. But he'd usually roll in to help about late afternoon. We'd get a couple hours worth of the heavier work done together; some linoleum removed or some old tile chipped off.
Then we'd retire to the back room and put some repetitive strain on the floor joists. Wotta demon!

There is one member of this sideshow that I have not mentioned previously, and that's because she was an expert at not being noticed.
We'll call her Mysterion.
Remember in The Munsters TV series, how Marylin was the only normal member of an otherwise bizarre family? How she sort of drifted through the cobwebs and dragon crap completely untouched, not a hair of her neat little flip-do out of place, as though her home context was nothing more than a bluescreen image? That describes Mysterion exactly.
I saw her a total of five times and spoke to her maybe three out of the five.

I do know that her room was at the back of the house. And I knew that the door to her room had 1. a handset lock, 2. a key lock, 3. a keyed turning deadbolt and 4. a security chain. And that Kelvin made it a habit of TRYING THE KNOB EVERY TIME HE WENT DOWN THE HALLWAY.
I shit thee not. I saw it.

But one morning Kelvin came down the hallway from the bathroom grinning.
"Hey, Mysterion left her door open! Nations, you want to see something sickening? Come look!"
Before the words were out of his mouth Dad and Eldest Brother were out of their chairs and headed down the hallway. Oh hell yes, I followed. I figured it had to be pretty good if they thought it was worth seeing.

Mysterion's room was light, feminine, with gauze curtains, lavender walls, a frilly white bedspread. Fluffy white rug on the floor. Ruffled shade on the dancing lady bedside lamp.
I stood in the doorway gazing around at an absolutely typical teenaged girls' room.
Okaaaaaaaaaaaaaaaaaaaaaaaaaaaaaaaay. 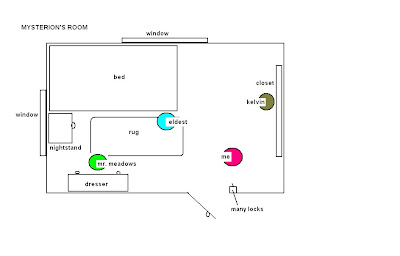 "Look at all the good stuff she gets", he hissed. "We have to dress in crap! Just crap! She gets everything!"

I thought, "Wait a minute. Your ass works and you're 22, Kelvin. Ever thought about buying your own clothes?"

To be fair, what I didn't know at the time is that his mother bought all his clothes. The one time Kelvin had shown up in things he'd bought for himself she'd thrown a screaming, crying, hysterical fit, made herself sick and made everyone's life a living hell UNTIL HE RETURNED THEM TO THE STORE.**

I noticed some boxes on the top shelf. Boxes for shoes? Boxes for dresses?

Bisquick, Instant Quaker Oats, and Jiffy mixes.
The whole top shelf of her closet was filled with boxed food.

I came into the house one afternoon to hit the bathroom, and as I entered the back door I was met with the most extraordinary sound.
Oh no.
Was it the refrigerator motor malfunctioning? No...
Was there something caught in the agitator of the washing machine sloshing around? No.....
After the hibbity bibbity incident I was pretty leery of repetitive moist noises in the Meadow's house, so I advanced cautiously.
Peeked around the corner.
From where I was I could see the crown of Mr. Meadows uniform hat just peeping above the edge of the couch. the noise continued, but now I could hear him too.
He was grunting. Huh Huh Huh Huh. Kind of....under his breath.
I heard a faint jingle.
Aw SHIT.
I had to go past him to use the bathroom, so what the fuck; away I went. What I saw when I got halfway through the living room just stopped me, stopped me absolutely dead in my tracks. Just thinking about it now makes my stomach feel wierd.
They had a Sheltie dog. Named Darla.
Darla was down at the end of the couch.


Have a nice day.

I'm sorry to say that yes, it does continue. The question is:
IS IT SAFE YET?
....actually no. There's a couple footnotes.

*Here's your first REAL EXAMPLE of what I mean when I describe Mrs. Meadows as a tapeworm segment stuck to Satans ass.
This woman took the nastiest, bowl-filling Doberman dumps it has ever been my misfortune to be in the same state with.
And didn't flush.
On purpose.
Let me repeat that. She was fully aware of what she was, or in this case WAS NOT doing.
On purpose.
To her, this kind of thing represented lighthearted family hijinks. Ha ha! Whoops, I guess I forgot to flush!
But it didn't stop there.

Whoops! I harked up a big ol' yellow wad of snot into the sink and all over the vanity and the mirror! Gosh darn me!

Whoops! Guess I'm having my period!

Whoops! There must have been a REALLY BIG SNAIL using the toilet last night!

FOOTNOTE 2...........
**And here's your second example of the evil which was Sunflower Meadows.
I witnessed this.
It was my fault, too. I was the one who'd convinced Kelvin go shopping for new clothes.
His mother took one look at the bag in his arms, snatched it away, upended it on the sofa and promptly began hyperventilating and freaking. "Is this yours? Are these for you? Don't you love me? I don't understand! I don't understaaaaaaaaaaaaand!" And off she went. Crying, screaming, throwing herself against the walls, into her husbands arms, stomping off to the bedroom, screaming in there, coming back out, crying, stomping off the the bathroom, slamming the door, pretending to throw up, coming back out, pretending to throw up in the kitchen sink... Poor Kelvin kept following her all over the house frantically trying to reassure her that it was all going back to the store but she'd shove him away and scream some more.
Finally Mr. Meadows looked at me with genuine embarrassment in his face, and said " I know you were just trying to be nice. I think you better leave now."

Good plan.
Posted by FirstNations at 8:41 AM