Malachite Waxwing Have One Thousand Of Debt!

I looked out the back window this morning and noticed the dead cornstalks thrashing about. "Aw hell, please don't tell me I've got a skunk," I prayed to the varmint god as I ran for the binocs.

When I raised them I saw a flicker awkwardly hopping around in my garden. This lady was nearly the size of a banty pullet; soft dove buff on the sides, with her gorget of shiny black. 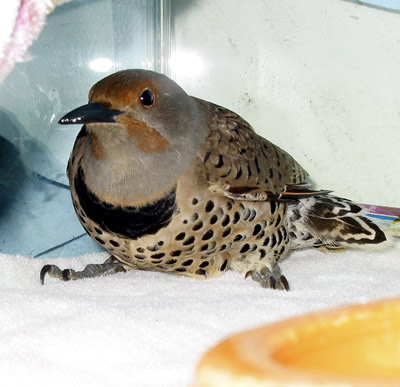 I've never seen a flicker this size before. The flicker one usually sees is a slender, thrush-sized bird, and usually stuck on the side of a softwood tree ring-barking it in search of sap and bugs. I checked out my plantings. Everything seemed good on that front so I settled in to watch the bird instead.

A Flicker has two toes front and two toes back like a ptsittacid, designed more for clinging to the sides of trees, so it wasn't making very good headway as it bumbled along. What it lacked in traction, though, it made up for in brute force, wearing a little circle of mud on its face where it had driven its bill further into the dirt than it had planned on doing. While I watched it went along pulling disgusting huge grubs up out of the soil. They might have been harmless; they might not have been harmless. I don't care...they were disgusting; now they're dead. Godspeed, birdie.

This autumn has brought the starlings out in their hundreds of thousands, so many that in flight they stop cars and darken half the sky. This time of the year their crops are full of rotted pears, apple mush and spoiled pumpkin. This effectively silences their wirebrush -on-steel flock voice, although one pays for the silence with the paint on any vehicle that isn't parked in a garage.

They flood in low from the field across the street and land on my lawn to pick and roam about, making all the browned stems in my neglected plantings jiggle about. (I know, I should have pulled this stuff out a month ago but I was too lazy; and it was raining. Probably.)
This late in the year they still aren't any smarter than they started out in the spring, I note: plenty of feathery little road pizzas out there have yellow feet, particularly when the pavement runs past an orchard or a hawthorne tree.

My hawthorne is down to bare twigs, too late for the starlings. A month or so past the robins beat them to the berries, and within two hours' time had stripped the tree bare of not only fruit, but leaves as well.
An American robin is a pretty sensible little guy, and not a destructive bird at all. When I noted this happening I clambered up on back of the couch to look outside, and after I watched the robins for a few minutes it dawned on me what the problem was.
These robins were bombed. 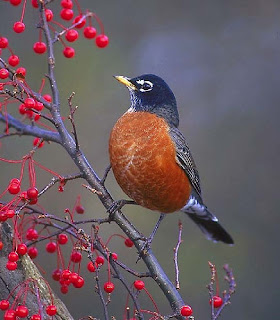 They flung themselves around at random through the branches, picking at whatever they spied...buds, fruit, each other, leaves...falling off their perches, missing them completely and crashing into the tam juniper, falling asleep in the grass while their friends walked over them. I think what had happened was, what few scarlet berries had fallen from the hawthorne by themselves had frozen, thawed and then fermented over the past few days. The robins were having a kegger.

Now a young sharp-shinned falcon destined for great things had taken note of this impromptu gathering of feathered hors d'oeuvres and had settled in to my 'Jackie Kennedy' rosebush nearby to spy out the situation. This bird was ingenious. As I watched he started up suddenly, frightening the robins into all directions like buckshot. It was fascinating to see. Both times he came out of the canes in a burst of motion and color, all eyes and talons and feathers-everything falcon, deadly and sudden 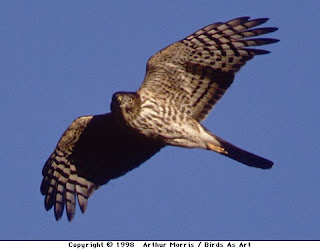 completely on display and just that quickly folded back into something rapid and hungry. The robins responded to this in blind panic. They bounced off the siding and left feathers in the overhanging shingles as they fled. Both times the falcon sailed past my window, around the hawthorne and back into the rose canes in an effortless gliding figure eight. Out, past and done.

Both times the robins flew as far as the neighbors willow tree and clung there swinging from the whips like awkward parrots, talking themselves into going back to the party. Both times they did. One minute the hawthorne tree was bare and the next it was full once again, robins hanging upside down, robins losing their footing and tripping, robins having arguments, trying to order drinks with complicated names, using the wrong bathrooms and hitting on the wrong women, robins attempting to pick up the same berry seven times in succession and dropping it each time.

The final time the falcon came rampaging out of the roses one robin smacked right into the glass only inches from my face. Immediately behind it sailed the little falcon, glide, whip, flare and land, right on a branch just outside the window. It paused, yellow and streaked as a little flame, looking down into the plantings at the meeping robin standing in the grass. Then it opened its wings slightly, drifted down and bit the robin just behind the dome of it's skull.
It happened quickly and neatly in as much time as it takes to read about. I drew back from the window and just sat there in awe.

Today the same young man came dancing past in his full adult plumage being harassed by the raven couple that live next door in the alder tree. Nothing much daunted he flipped his tail and sailed into a nearby cherry tree. Once they felt that this undersized menace was taken care of, Mr. and Ms Raven parted and circled and regrouped and parted again, and played in the air all the way back to their raggedy pile of sticks high up in the limbs of the alder.

I get a kick out of watching the two of them. Back when they first met they were all young love and sweet nuzzles. They would sit on the roof of my shed and watch me weed the garden while they tenderly fed one another tidbits of baby bird. They whistled musically, or said 'Mao? Rom? Mop' while the fat broad toiled below, one nestling down like a comfortable chicken on the tin roof while the other one strode around picking in the corrugations for hidden treats. When I was inside my shed I could hear them up there on the metal just over my head like two romantic bags of nails as they shuffled around.

The two of them are like an ace barnstorming team. When the walnuts ripen down the street they play catch midair over the fields. One flies high with a green walnut and drops it; the one flying low flips over onto its back in midair, at the last possible moment before the walnut would bonk it on the head and catches it with its beak and feet. High dips low, close to the ground, while low flies high. Once the walnut is dropped, it is caught; but this time it is flicked up into the air by low. High snags it, flapping its wings hard, and shoots straight up into the air to drop the walnut once again. Over and over they loop, switching places and altitude randomly, and yet seldom does either of them ever miss a catch. 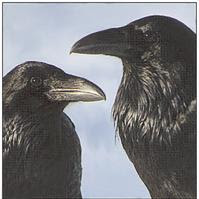 When the house sparrows built a nest in the clematis just outside my kitchen door this summer I lined up a row of clattery milk jugs on the porch rail to make the ravens think twice about robbing their nest.
Once the noisy little family was fledged and the nest abandoned, I took the milk jugs down and left a cob of corn there to lure the ravens back.
When I checked that evening, the corn cob was gone; and in its place was a small, small egg...palest blue with dark maroon speckles...a sparrow egg left behind in the little nest just beneath.
I still have it.
Posted by FirstNations at 1:37 PM