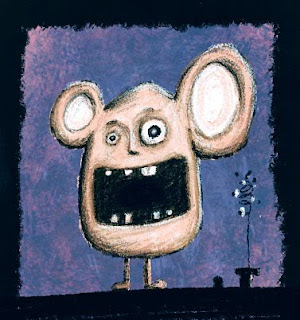 I noticed the first unusually casual Norway rat on my property about five years ago while I was out gardening. What I thought was a mallard duck bumbling around in the flowers turned out to be one of the biggest Norways I've ever seen. This thing had an ass the size of a softball. And there it was, maybe three feet away from me, ambling along, making no attempt to hide. It just gave me a casual 'S'up?' kind of a glance and paid me no further mind.

The first thing that springs to mind when you've grown up around wild animals and one of them starts acting atypically is that it's probably sick, and 'sick' usually means 'rabid'.

I eased back toward the house. The rat ignored me.

For the rest of the afternoon I looked out the living room window and watched while the rat sauntered around in my flowerbeds. "Jesus Christ come look at this thing!" I'd say, while my husband continued to watch Powerblock. "No seriously! The goddamn thing is still out there! Come look at this!"
"I've seen rats," he'd reply.

Over the next couple of years we saw a few more, from a distance. Since I have no problem with distant rats I grew to accept their presence as one of the unpleasant aspects of living in a rural area, like Avon products, fundamentalists, and widespread methamphetamine abuse.

Then we had our next close encounter. You can read about that here. G'head. I'll wait.

As the next couple of years went by I began to see more wildlife around the place, rats included... but since they weren't parking their Winnebagos on my lawn or trying to sell me Amway I shrugged it off. Until the morning I stepped out onto the front porch last summer and a huge goddamn Norway rat came trotting up the steps toward me.

No shit! Just heard the door opening and came merrily right on up the steps like it was going to come in the house! Like a dog!

It stopped short and looked up at me, totally perplexed. Just flummoxed.

When it finally dawned on me that I was standing out on my front step attempting to interact with a feral garbage rat as though it were a stray poodle, I booked ass into the house and slammed the door.

I looked out the window a couple of seconds later.

It was on the porch. 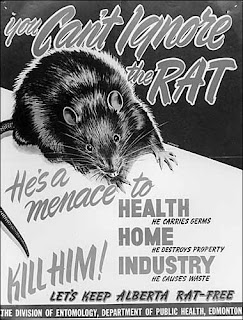 Over the next couple of weeks I watched as several more rats came roaming through the yard. Now, not to be boastful, but up until then I'd had one of the showplace gardens in my town. Nothing takes the bloom off that 'showplace garden' image faster than a couple of huge rats wandering around. Not even cement deer. Not even Canadians.

These were some chill rats, too. Nothing phased them; not pedestrians, not passing cars, nothing. They were out there basking in the sun, washing their little ratty faces and licking their little ratty asses! Seriously! And some of these newer rats were not doing real well. They had some kind of scabby rat disease and their hair was missing in big patches. So not only did I have rude rats; no, that wasn't bad enough! I had rude diseased crack addict rats with eczema out in my front yard performing acts of intimate personal hygiene!
No!
This was not acceptable!
No way in hell was this acceptable!

You want to know what was really unacceptable, though? When my husband, the Yummy Biker, walked into the mud room a few days later to find a huge goddamn disgusting filthy vermin covered rat calmly eating out of the dog* bowl.


A wild Norway fucking rat had come into my house THROUGH THE DOG FLAP, and was EATING THE DOGS FOOD.

Now, I was outside when this happened and had no idea what was going on. I remember a huge shout going up and then a lot of loud crashing and banging and yelling. I decided my presence was not required.

Apparently upon seeing the rat, my husband grabbed a broom and began randomly flailing away at the rat there in the small entryway. The rat responded by leaping at the broom and hanging onto the end of it, which caused the Biker to whip it around in the air, kind of like rat lacrosse, which activity finally flung the rat up into the air and behind the dryer. The Biker jumped right up onto the dryer after it, and with the broom now held like a javelin began stabbing at the rat, which was jammed back there down in the small space between the dryer and the wall. All this did was dent the dryer and chase the rat beneath the nearby washing machine. My husband leaned over, yanked the washer out from the wall, and continued to try and skewer the rat with the bristle end of the broom, something he reports wasn't getting him much of anyplace fast, although it seemed to annoy the rat, which ran out into the kitchen. Where it went after that he didn't know. It disappeared. So he ran into the bedroom, grabbed a rifle and systematically began tearing the entire house apart. Broom in one hand, rifle in the other. He was prepared.


Thank God it was summer. We think what happened was that the rat ran straight through the house and out the front window. We never found a single trace. Still, getting to sleep that night was....difficult.

*we briefly owned a dog this last summer, but he will be the subject of a future post.
Posted by FirstNations at 10:12 AM