it's hot; I'm grumpy, and i blame the Pre-Raphaelites, goddammit

"When I was a child I spoke as a child I understood as a child I thought as a child; but when I became a man I put away childish things." I Cor. xiii. 11.
Which is fine as far as it goes, save the part about being a man. Well then.
(This one goes out to Arabella! who is a Brit; so don't get all poopy with me ya limey bastards.)
When I was young I was SWOONY over the Pre-Raphaelites. 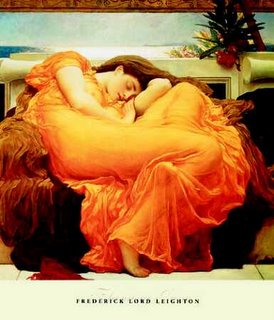 My God, the opulent colors, the dramatic poses, the ethereal forms and languid gestures! No one was more shocked than I was to discover that these paintings came out of a 'serious' school of art. I had always thought they were book illustrations.
Now that I am a grown woman *ahem* there isn't a one of them I would hang in a main room of my home. I still look at the 'serious school of art' aspect with the same bemusement, though. 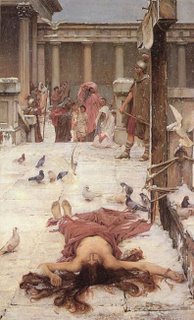 William Waterhouse occupies the nadir of the pretty wallpaper-whups, the Pre-Raphaelite movement. I believe he had a keen enough appreciation of business to realize that in the end he needed to create something in keeping with a passing trend that would look nice on a clients' wall. Take poor St. Eulalia* here, dead in the snow with the pigeons picking at her toes. Somehow he manages to make even this decorative. Give the man his due; he was a fantastic artist and technician. 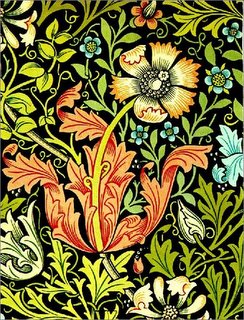 Wacky, zany, loveable madcap commie William Morris actually DID turn out pretty wallpaper. Pretty textiles, pretty furniture, pretty homes and pretty bad fiction, too. Still, good for you, Bill. He stated exactly what his aim was; elevating craft, and by God he did. He may have been a goofturd, he may have been windy and self-important, but he was honest about his calling. Publicly.

There are lots of other artists who gathered under the Pre-Raphaelites' banner, and many of them were quite good at what they did and worthy of a favorable mention. But I, uh, don't know very much about them. And since it's more fun to leave a flaming bag of shit on someone doorstep than it is to sing praises, I present you Holman Hunt.

Holman Hunts' work has an extremely visceral effect on me. It makes me long to travel back in time and beat the living crap out of him with a pitching wedge for being such a SENTITOUS WAD OF PUKE. Remember the kid on the playground that smelled like pee, the tattletale, always trying to kiss girls and wipe boogers on people? I am certain that this describes Holman Hunt as a child.

I can't help it. Everything about his work makes me want to dig him up and set him on fire. His use of color BLOWS. His models are ugly and have a strangely unwashed look to them, many times.
And he uses INDOOR light on OUTDOOR subjects. GOD, this makes me nuts! 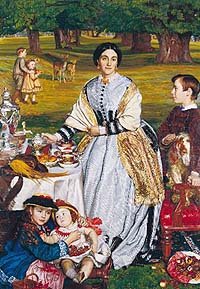 This is like bad carnival superimposition. Am I not supposed to notice this? What the fuck? GAAAAAAAH.

Yet stay; and let us focus for a while on his poor grasp of symbolism. Yes, do lets.
Poor grasp indeed; in his hands symbolism is a highly annoyed dogfish that he's frantically trying to club to death with a sock. Remember: Just because you use a lot of symbolism does not automatically mean that you use it well. Let's give it the hamster test, shall we? 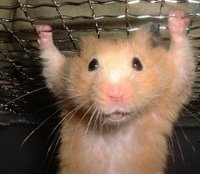 Guest hamster: bluto schmuggleware,
a typical hamster on the street
and ENTIRELY WITHOUT ODOR. 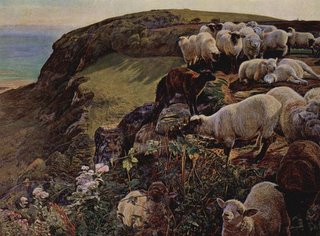 Tell me what is going on in this picture.
-Well, its some sheep.
What else?
-It's sheep...outside.
Good....
-Um. Yeah. Sheep.
No no no you dumb hamster! This is a stinging, biting sociopolitical comment on Englands' lack of preparedness and leadership and stuff! Bad hamster! Go back to college!


Gentle reader, I ask you: Should this have ever been painted? 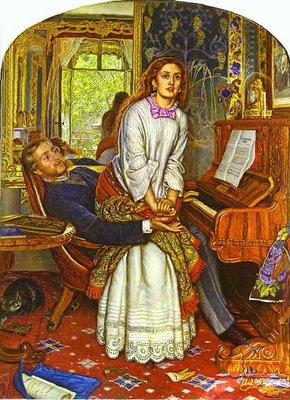 No. No, it should not ever have been painted.
At this moment I cannot think of another single image that annoys me as much as this one.
Lets give it the hamster test!

Now tell me what is happening here.
-It looks like she sat in his lap and got surprised when he popped a wooder.
Victorians never, ever popped wooders. It made Queen Victoria cry.
-No, lookit! He's saying, like 'Hey, come one, it's friendly!' and she's like 'Woo! Wasn't expecting THAT!"
No...
-She looked out the window and saw a UFO?
You Philistine of a hamster; that is CLEARLY a picture of a womans' higher being awakening. She is leaving the embrace of luxury to embrace Salvation! She has realized that she CAN rise above debasement and leave delivingroom!** 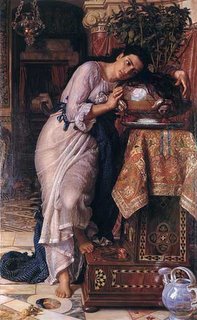 And then...there's this. Well?
-She owns a depressing houseplant?
Try again...
-She owns depressing pottery?
No...
-She forgot to take her birth control pills? She forgot to use moisturizer after she exfoliated? She's trying to hear the ocean?
No, no no. NOTHING could be more clear. Obviously she is a woman in the grip of a strange and powerful love...a love so strange and powerful that it cause her to decapitate her recently deceased lover and put his head in that giant urn. And plant basil on top of it.
-...All right. Now you're just fucking with me.

Bluto Exuent.
Good thing too, because here comes a man who really needed a hamster up the ass;
Dante Gabriel Rossetti.

What a prize creep. I can hardly stand to look at this guy...he's begging for an aluminum baseball bat; man, right to the side of the head. Wwwwwwwwhap! Home run! Right over the fence.
First of all, he self-named. Wwwhap! That earned him a freebie.
Notice how people who self-name never choose anything like Paul or Mary? Its always something simpy. Like Dante. Or Moonshadow Warrior or Jas'Mynne.

Today, our Mr. Rossetti would be a sweater humping emo boy with a razrphone and ironic hair. He'd weigh 98 lbs soaking wet and be prone to bronchial aliments. And smoke 'Camel' cigarettes. He would be a vegetarian. He would have a dirty, dogeared copy of Joseph Campbells' 'Hero with a Thousand Faces' and it would be papered with yellow Postits. He would have a rip-roaring case of herpes, genital warts and be a carrier of chlamydia. Every woman he knew would be itching and burning and afraid to go for long car rides.
God I HATE this guy.

This is his wife and model, Elizabeth Siddal; a plain, thin unremarkable woman, yet a perfect tabula rasa for him to scribble all over. He marries her after condescending to live with her socially inferior ass for 11 years, all the while putting the meat to everything female that crossed his line of vision. A few months after he does her this huge favor, she loses a child and commits suicide. But he loves her SO MUCH that he buries a book of his love poetry with her-what a romantic gesture!! Except he gets to thinking about how great this poetry is and how it's his only copy, so he has some friends rob her fucking grave a few months later so he can get it back; the self-centered, craven little prick. What a guy!
This is his picture of his wife. 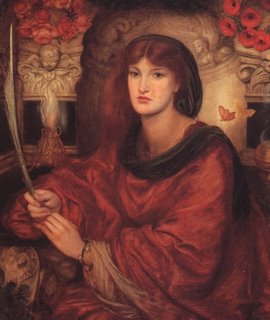 Ah. Much better. She has lips now. And she's, you know, pretty.

This is a picture of his friends wife, just about everybody's model, and Rossetti's mistress, Jane Morris.

A woman who possesses an undeniably glorious bone structure, not to mention a head of hair you could get lost in. And a decidedly Mediterranean cast to her features.

This is her, whited-up jest a tech, by yours truly. The way he always sees her. Neck and bone structure, hair and lips. What an IMPROVEMENT,, huh?


All his women are the same...mindless, exquisite, room-temperature bodies flapping around the landscape like wet laundry. The very last thing Rossetti wants in his 'idealized' women is anything like a person present.
This is not just wallpaper...
This is icky wallpaper. 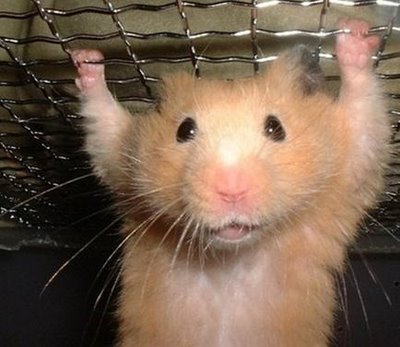 With no detectable aroma whatsoever. Other than cuteness.

**boy, I remember the martyrdom of St. Eulalia a little differently than this...torn with hooks and set afire, wasn't she? maybe they tossed her in a snowbank to put her out or something.
**forgive me; I could not help it. I truly apologize for any permanent damage that may have caused.

Posted by FirstNations at 11:01 AM