Something that bugs the crap out of me are the photographs used for identification purposes in birdwatching magazines and manuals. Nine times out of ten you'll get a prettily presented birdie posing to it's very best advantage or doing something cute...very seldom if ever presented in it's typical state. For example, the blue heron: 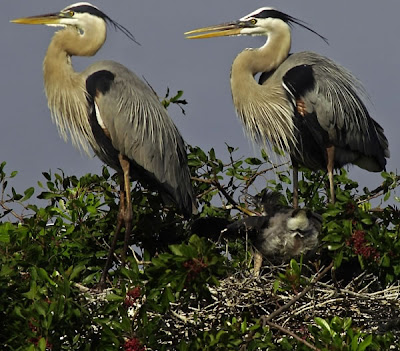 If you were to try and identify a blue heron by this picture you would be shit out of luck. Blue herons never look like this, at least not out where you can see them. This is a social nesting posture. All their display characteristics are-well, on display. The 'whoop de do' on the head and the spikey feathers at the neck; the white shoulder epaulets and the position of the neck are all characteristic of the bird as it rests in a place only accessible by a nut with a ladder or a pirogue. It's pretty, but it doesn't do me any good.
Now this is more helpful: 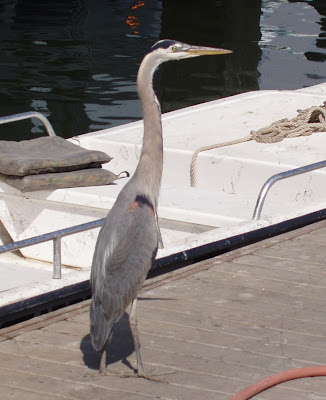 Here's a heron doing something typical out where regular people can see them. It's standing on a private boat dock in an 'alert' posture. You'll also notice that there is nothing particularly 'blue' about it, probably because calling it the 'tall scroungy looking heron' wouldn't sound as poetic. Still, this is the heron you'll see standing in every field and in every ditch in Whatcom County, watching the cars go by. 'Oh, theres a heron," you could say, right before it comes leaping in through the windshield and tears out your throat.

No, ha, herons don't do that. And most herons are not poisonous. Mostly what they do is stand around looking like that picture. That, and jumping out of swamps late in the evening and flying across the front of your car like a giant pterodactyl and saying'GRONK'. I've almost gone in the ditch twice now because of these things. I'm not joking. Down on the corner of Goodwin and Sorenson by the haybarn where it always floods? Yeah. Watch out.

This has been a banner year for blue herons. The things are everywhere! I don't know if it has anything to do with the weather or what; they must have fledged a lot of young last summer or something. I can look out the kitchen window almost every morning and see one or two of them standing in the soccer field behind the house, or fishing in the 'seasonal lakefront' that forms at the corner of my fence line. My poor girldog nearly has a seizure when she sees one standing too close to "her" yard. She explodes out the dog door barking like a lunatic. Then again, if you look at it from her point of view, a heron is a big, freaky, pointy bird taller than she is; I guess that would be alarming now that I come to think about it. Maybe I should be more grateful she's on patrol. We are safe. Safe from blue herons, Guatemalan soccer players and women pushing baby strollers. And Mormon kids on bicycles. And the UPS guy.
************************

I noticed the return of the 4 resident nesting eagle pairs back on December 2. They've been sailing around the sky ever since, not doing much besides looking primeval and roosting wherever it pleases them to by night. They don't have much interest in their nests right now, besides keeping their claim staked. In any case it would be a never-ending job of repair given the successive waves of wind and rain storms we get here all winter.

After they fledge young, the eagles only stay around for a few weeks in January and February. I'm told they go then either up to the San Juan Islands or out towards the coast. I don't know what they do there...drive cabs, work at McDonalds...probably something that involves standing around. Eagles are good at that.
While they're here, though, they raise their families in the best American tradition...doing next to nothing, gorging to the point of bloat on bad food and making a lot of pointless noise. 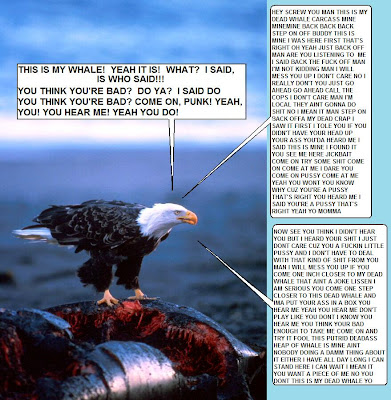 Now, maybe I'm being a little harsh; I've lived so closely with them for so long. An eagle in the wilderness is a glorious thing, but then it has a glorious backdrop too. An eagle dragging an afterbirth across a calving pen is...not quite as glorious.
***********************

Once the ground is well and truly soaked down to the substrate, right around grimmest, bleakest late November, early one morning you hear the Trumpeter swans coming in through the low clouds. Hundreds of them. Later you find that your ungaraged car is now an entirely new color and texture. Say what you want about the destructive cloacal acts of the Canada goose; nothing dumps a payload like a Trumpeter swan. I don't know what they eat but it makes for some truly spectacular poo. Ever see a small plane pulling a banner behind it? Like that.

Like the eagles, the Trumpeter swans spend a large part of their time majestically doing jack shit. The swan, though, prefers to do this in mud. A mown hayfield glimmering with a winter-long standing puddle or a cornfield full of stubble suits them to a T, although you'd think it would be poky. As soon as they land they begin striding back and forth picking stuff out of it. What I have no idea. Rocks, sticks, bugs, wristwatches; whatever it is, they like it, and there certainly seems to be a lot of it too. A field that a flock of swans have visited will be as plowed up-looking after they leave as though a cultivator had run through it.

In the afternoon you can see them gathered apart into small groups to have what you can only describe as conversations...making quiet chickeny bucks and clucks to each other. All of them are by this point thoroughly splattered with mud and God knows what else...but if the sun happens to come out from the clouds the group will gleam like a beacon.

It's that quality of whiteness, their complete absence of color, that takes me by surprise every year. You think of a swan as white, but this is something altogether different; a perfect white, so perfect it's difficult to hold in your memory. You can clearly make out a group of swans even in the center of a field completely blanketed in the newest, whitest, cleanest snow.

A swan with no place in particular to go flies with a certain deliberation. Their wings stay bent in an air-collecting crescent shape when they move through the lower atmosphere, giving them a rather un-bird-like silhouette. And thought it sounds trite, a trumpeter swan really is whiter than white; the most completely white thing you've ever seen. A flock of them flying down the valley against the snow-covered hills looks like a flight of spirits drifting through the air. 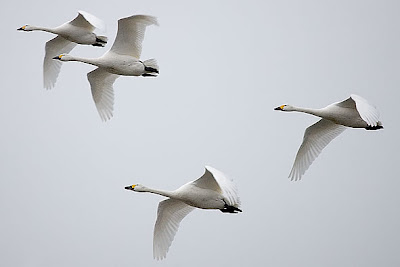 Posted by FirstNations at 8:42 AM